What are smart lamps?

Electricity plays an important role in the life of any person. In this regard, the market is constantly developing possible devices and lighting elements so that they not only illuminate the room, but also save electricity. So there were smart lamps. What is it and how do they work? In a smart home, to control various devices and systems, there is a remote system. A smart bulb is included in this system and is capable of performing a number of necessary functions, which we will discuss later.
Content:

The LED light bulb has many additional features. It can be with a timer or with a brightness or color adjuster. But there is such an improved function that mimics the presence of the owners of the house. How does this happen? The module, which is located inside the lighting device, tracks the daily rhythm of the inhabitants of the house. Tracking occurs within one week. Then such a smart lamp will work independently in the mode that it remembered, which will provide protection for the house from thieves. 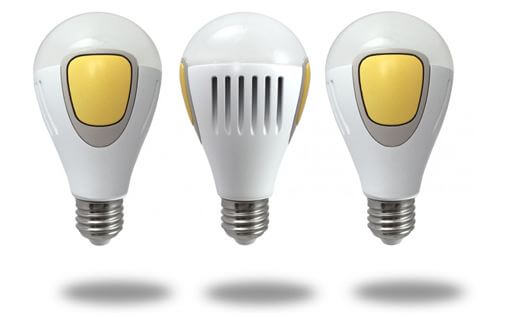 In addition, such bulbs have additional interesting features:

Also, such light sources can be controlled by a mobile application from a distance. But such a function suggests: why is this necessary if the device can independently work in the absence of residents at home?

This kind of smart lamp has a built-in wi-fi repeater. If necessary, the signal amplification function is further adjusted. To control the system, just install a special mobile application.

Inside the lamp used are two antennas, with the help of which data is transmitted at a speed of 300 Mbps. This means that in addition to lighting, such a device can set up an Internet connection anywhere in the house, even in “dead zones”. And by the way, installation is simple and easy.

Consumers will always have more than what the developers came up with. That is why many functions and complete safety of using the device are no longer admired. To please and surprise consumers, the developers came up with and implemented another smart lamp with music, which has built-in speakers. The power of the speakers reaches 6 watts, and this allows you to get high-quality sound of music.

Data transfer is via Bluetooth. This light bulb allows you to create themed areas in the room. For example, turn a relaxation room with smoothly changing lighting or make a room look like a night club.

But the developers did not stop there.A smart lamp for the house was invented, in which a video camera was built. The image from the camera enters the mobile phone without delay, that is, online. There is also another interesting feature that alerts you to missed ringing on your phone. This is done using a light signal.

As you can see, a smart lamp is a special device that allows you to significantly save on electricity. Although their price will be an order of magnitude higher than a conventional light bulb, during operation the result in savings will be noticeable. Moreover, the variety and functionality of the models quickly attracted attention and won the love of customers. If such a bulb was used at least once in everyday life, then no one will have a desire to return to the classic version.

Now we will consider the most popular smart lamps for the home, as well as their main functions.

Philips Hue. One of top manufacturers of led bulbs, Philips, has long been presenting its multifunctional LED bulbs. The main features of Philips Hue are: control from a smartphone, brightness control, an on / off timer, an alarm clock, a color change and even responding to a new email message that seems somewhat unrealistic.

Xiaomi Yeelight LED. Another smart LED light bulb that can be turned on and off from a smartphone, change the brightness of the glow and work according to a specific scenario. In addition, it has a timer, which allows you to configure a specific on and off mode.

Luminous BT Smart Bulb. Functionality: choice of color and lighting power; Bluetooth control; creating a system that includes several bulbs. Also, such a smart lamp can turn on and off at a set time. The range of the radio signal reaches 40 meters.

Drift Light. This version is limited in function, but has a simple and easy control. For example, to turn the lamp on or off, you need to press the switch once. Double-clicking turns on the night light mode. If you press three times, the device will gradually go out within 37 minutes. This is simulated sunset. In this mode, the body goes into sleep mode more easily, therefore, in fact, this smart bulb is called for sleep.

So we examined what smart lamps for the home are. The article did not list all popular models, as there are quite a lot of them. We hope that the information provided was interesting for you and inspired you to purchase modern LED light sources with a remote control, battery, speaker and other structural elements!