A high-quality LED is an order of magnitude more expensive than a conventional light bulb. This was the reason that it is not always used as the main source of light. But many manufacturers solve this financial issue in different ways and, of course, not always successfully. Quite often you can notice how, after a short period of time, the LED bulb begins to shine not so brightly or even in the wrong color, this is the degradation of the LEDs, the causes of which we will now consider.
Content:

Manufacturers promise and guarantee that the LED is able to work up to one hundred thousand hours of good work (an average of 50,000), given that its current will be 20 mA. However, manufacturers from China prefer to install a chip in the diode, which is used to illuminate the screen in a mobile phone. In such optoelectronic devices, the LED is designed for currents up to 5 mA. Due to this, products are manufactured at a lower cost and, as a result, an unfair victory among competitors, since the LED will begin to work worse over time, will begin to degrade,.

The degradation of LED light sources also manifests itself during heat generation. Since the housing for lighting elements has been developed for a long time, the process of its assembly is carried out in a highly automated way. The old LED is great for such a housing, but it is completely not designed for bright LEDs. The planting socket in the installation should not exceed 12 mm, so the old case is no longer able to remove the waste heat. Because of this, the chip is not able to avoid such a thing as degradation.

The graph below indicates how the crystal life depends on temperature increase: 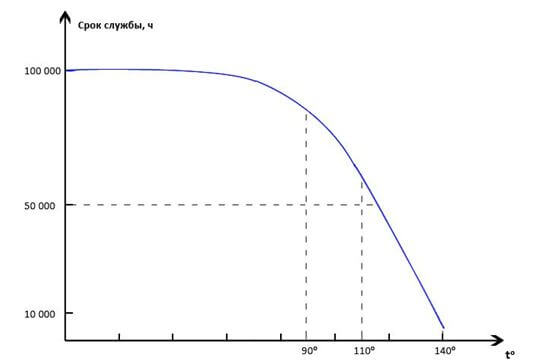 One of the main reasons why the degradation of LEDs occurs is the poor quality of the chips used. Despite the fact that there are a lot of manufacturing companies, most of them use crystals that are made using the same technology of the first generation - Nichia prototypes, which have a transparent p-contact.

This is considered the cheapest technology that is widely used in mobile devices. Such an LED lamp behaves quite poorly in hot environments. And this means that their use as lighting is undesirable. In addition, if we compare the characteristics of such crystals with their counterparts, which are related to the Nichia prototype, then they have nothing in common and common. This is due to the fact that crystals are grown with neglect and non-compliance with the main technological processes, as well as using low-quality equipment.

Violation of the main stages of assembly

In the race for customers, amid great competition, Chinese manufacturing companies do not particularly monitor and control the assembly process of the device. This led to the emergence of another reason for the degradation of LEDs - due to poor-quality assembly of lighting devices.In this case, manufacturing companies work on a simple principle - the main thing is not quality, but quantity. And as a result, the LED lamp serves consumers much less than indicated intechnical characteristics of LED lamps.

However, it is difficult to determine why the LED does not work well and degrades its properties, what factors affect this. Degradation may be different. 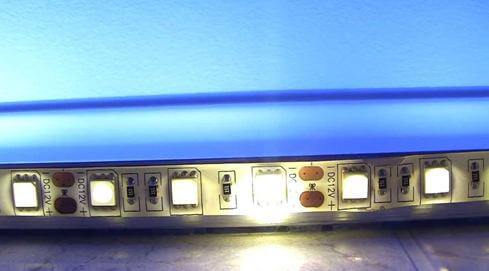 The diode is placed in a case in which the characteristics and properties are significantly inferior in quality. However, such an LED lamp fully complies with all technical characteristics, therefore it is initially considered suitable. Its brightness Colour temperature, voltage and other parameters correspond to the data that are prescribed in the manufacturer's specifications. And since the purchase price of such lighting elements is low and affordable, many importers purchase them. However, the service life of such light sources is an order of magnitude less than the period indicated in the passport and is only a few hundred hours instead of several thousand. This fact was confirmed during the testing and operation of the components.

There are several options for improving the efficiency of diodes and, accordingly, delaying the process of their degradation. For example, to improve the quality of the material used, to modify the structure and construction of the chip itself, as well as the technology of its formation. Also, when testing the surface, you can achieve efficiency in the high-quality operation of LED components.

Well, the last reason for the degradation of LED strips and lamps is the incorrect operation of these lighting fixtures. The fact is that overheating can occur not only because of the design features of the product, but also because the user who deliberately bought cheap Chinese LED products did not at least think of a good heat dissipation. If we talk about LED strips, it is recommended that they be mounted on an aluminum profile, which will help save the diodes from overheating and further degradation.

However, this reason cannot be called so justified and often occurring, because nevertheless, poor build quality, improperly selected chips and the deliberate use of cheap components by manufacturers are the main factors because of which the LEDs glow dimly or differently!

Finally, we recommend that you look at a good example of the degradation of LED strip:

Now you know what degradation of LEDs is and what are the reasons for its occurrence. We advise you to purchase LED products only from trusted manufacturers so that you do not encounter this phenomenon in the future!

Be sure to read: