Which is better: LED lamps or energy-saving?

Thanks to technological advances in the field of electrical and electronics, the modern range of lighting products is very wide. It is extremely difficult for a consumer who has not yet touched on this topic to sort out a huge selection of different solutions. With the aim of energy saving two pillars are fluorescent and LED energy-saving lamps. This article is intended to compare their characteristics and provide an adequate idea of ​​the advantages and disadvantages, which will help the buyer to find out which is better to choose. Next, we will provide a comparison of LED and energy-saving lamps.
Content:

Electric energy consumption for fluorescent lamps is about 20 percent of standard and familiar incandescent lamps. LED is even more economical - Ilyich’s relative light bulbs use about 10 percent of their energy. Thus, the power consumption of a light source based on semiconductors and LEDs will always be 2 times less at the same brightness.

The color of the spectrum for a gas-discharge energy-saving light bulb is somewhat less qualitative relative to its LED counterpart. Fluorescent lamps do not quite correctly transmit the light spectrum regarding some shades. Compared to gas discharge, the LED version is more stable in this regard. 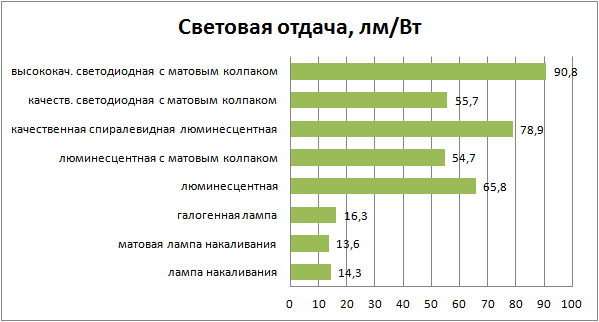 The table below summarizes the characteristics of the considered light sources: 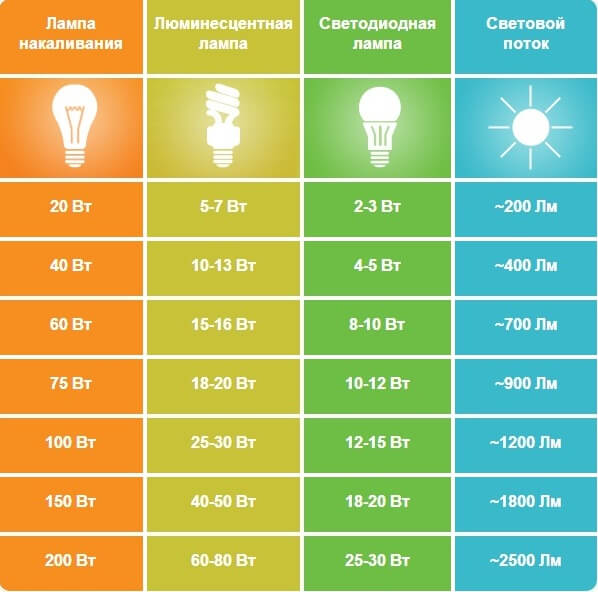 A gas discharge fluorescent lamp with continuous operation has a temperature reading of about 50-60 degrees Celsius. She is not able to burn the skin and, even more so, cause a fire, but still this is a pretty solid indicator. But it should be borne in mind that with a malfunction of electronics, the temperature indicator can increase 3-4 times. This risk is unlikely, but exists. LED lamps are completely safe in terms of high temperatures due to their semiconductor technology based on LED crystals. In any case, a comparison of both those and other light sources shows that it is permissible to use them with any kind of lampholders for chandeliers, sconces and other lamps, since they do not exceed the maximum allowable heating with correct operation.

Environmental factor and harm to health

The fluorescent lamps, which are located on store shelves, in the composition of the bulb have about 5 milligrams of mercury. Mercury is a metal, in view of its harmful properties that harm the human body, it is assigned to the first (highest) hazard class. Dispose of housekeepers along with the rest of the garbage is prohibited, therefore, the conscious user should take the failed lamp to the specially designated reception points. 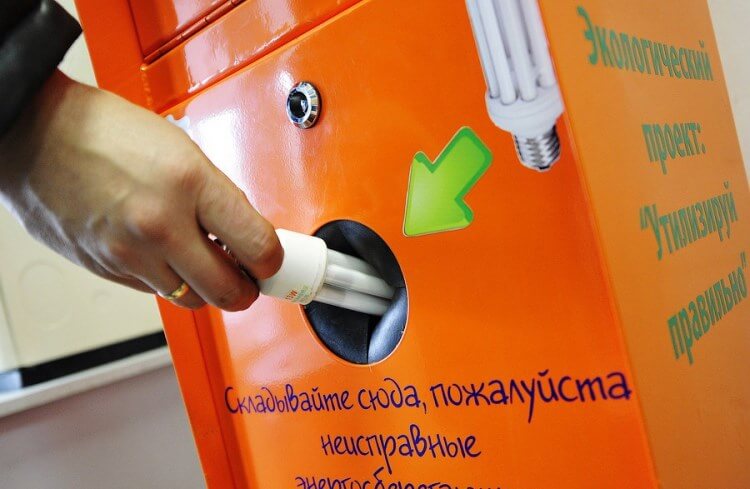 It should also be noted UV and infrared radiation emitted by a fluorescent light bulb, which can cause some diseases. The above disadvantages do not apply to LEDs, their use is completely safe.

Energy-saving fluorescent lamps flicker at a frequency of 50 times per second. The naked eye is not able to notice this phenomenon, but there are people for whom this effect can cause exacerbation of nervousness, or the appearance of a melancholy state. Luminescent light sources equipped with high-quality electronic ballasts are devoid of this effect. LED lamps in this case also compares favorably with those of gas-discharge analogues due to the absence of a similar problem.

In this case, he talks about how much an energy-saving lamp gives out light energy relative to electricity consumption. For housekeepers, this figure is about 30 percent, while LEDs are again at a height of about 80 percent and higher.

Fluorescent lamps on average serve 5 times less than LEDs. As a rule, a table with the corresponding data is located on the box with the product. According to manufacturers, the life of an LED lamp can reach up to 50 thousand hours, while energy-saving bulbs last no more than 10 thousand hours. The comparison in terms of service life is obvious - LED products benefit significantly in this indicator. 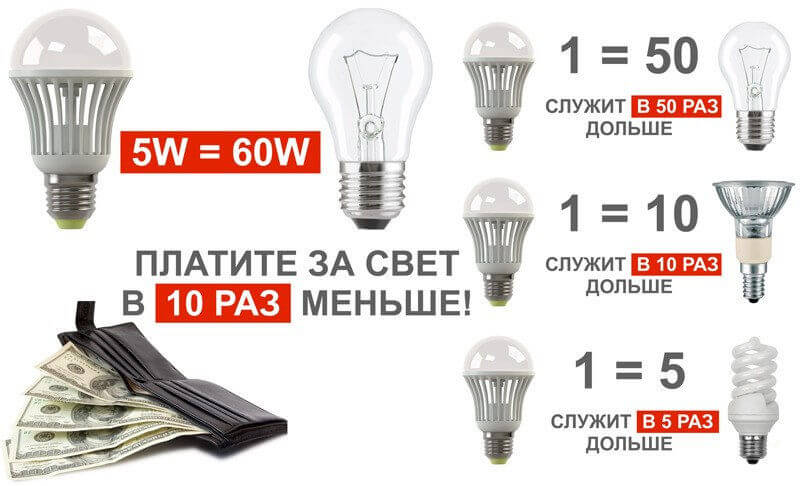 Comparison of other factors

The fluorescent energy-saving lamp turns on for 1 second, which is associated with the operation of its electronic circuit. At low temperatures, due to a drop in gas pressure inside the bulb, the brightness decreases significantly. This is due to the fact that mercury loses its volatility and is forced to heat up over a longer period of time. High humidity also negatively affects the operation of the fluorescent light bulb. It causes the presence of a film formed on the surface of the flask, which is a nuisance for its stable operation and rapid heating. LEDs start working instantly and have an impressive temperature range for stable operation.

Another important comparison criterion is the warranty period. For LEDs it is on average 3 years, when for energy-efficient light sources it is 1-2.

If you compare LED and fluorescent lamps at a price, then there is definitely a draw. To date, both versions cost from 200 per piece, if we talk about more or less high-quality manufacturers. A few years ago, energy-saving lamps could still defeat LED products because of their lower price, but now (2017) the cost of LEDs has dropped significantly due to high competition and the appearance of budget Chinese manufacturers on the market. 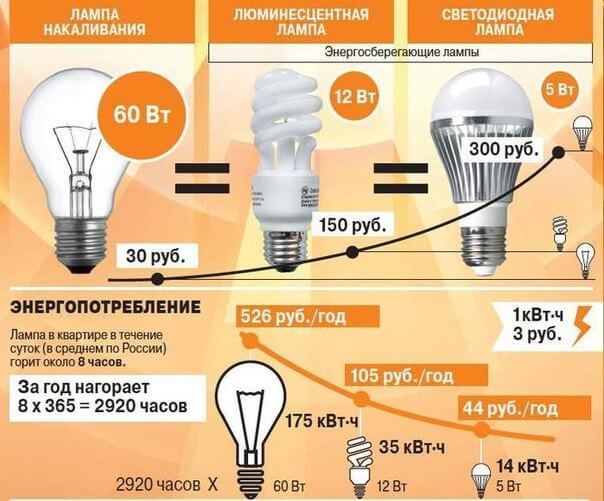 Guided by the above information when comparing energy-saving and LED lamps for home, office or any other premises, the model that works on the principles of LED technology, that is, LED, will be the decisively best solution. In support of this, we attach a few useful videos on the topic:

So we have provided a comparison of LED lamps and energy-saving. We hope that the tables and arguments provided have helped you to explain what is better to choose for your home, apartment or office!