Where does IT grounding system apply?

The main feature that the IT grounding system has is an isolated, or having ground through a high resistance, neutral power supply (transformer) according to the PUE p. 1.7.3 (see Chapter 1.7) All exposed parts of electrical installations made of conductive materials are grounded. Grounding of the conductive parts of the electrical installation must be carried out in accordance with the requirements of the PUE. The value of the leakage current during a single-phase earth fault in such a system is small and does not have a noticeable effect on the operation of electrical equipment. An electrical installation can operate in emergency mode for a long time.
Content:

A bit of history

The power supply system, which has an isolated neutral, was very widely used in the early USSR. The housing stock of those years consisted mainly of wooden unfinished houses of the barracks type. High-quality grounding of an electric shield in such a house was not easy to perform. The household electrical network had a voltage of 127/220 V and an isolated neutral. Under these conditions, accidental contact with a bare wire could have minimal consequences, even if you were holding onto a water pipe.

The grounding diagram of IT is as follows: 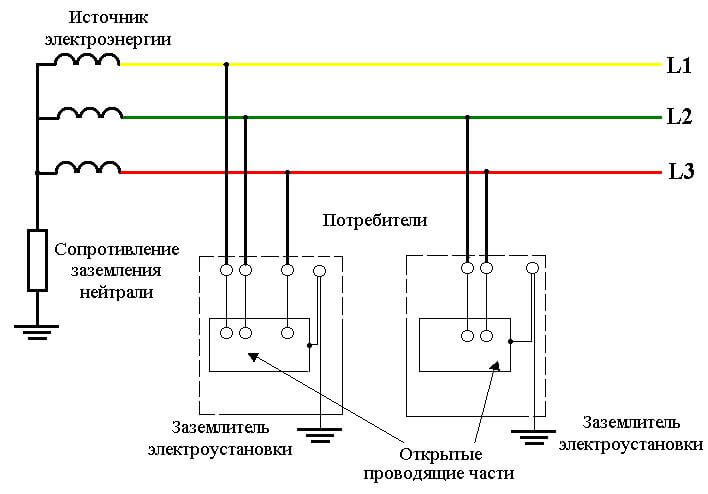 A massive transition to power supply with a neutral, grounded, occurred during the large-scale construction of reinforced concrete residential buildings (the so-called "Khrushchev"), despite some of the advantages that the IT system has. In such houses, conductive load-bearing structures, as well as a grounded water supply and heating system, have found application. These circumstances provide a very high probability of unintentional connection of these elements with one of the power wires. This mode in the IT system is not monitored by current protections and can continue for a long time. In this case, the danger of electric shock increases when you touch the second power cable. Thus, a circuit in which IT grounding is used, depending on where it is used, has both pros and cons.

Despite some negative features that this system brings with it, there are some areas where IT grounding is used as the optimal solution to security problems. Currently, the IT grounding system is used in the power supply of structures requiring increased safety and reliability. For example, this applies to mine electrical installations. Under underground mining conditions, explosive mine gases are very often accumulated, and a system with isolated neutral, the principle of operation of which ensures the absence of sparks during a single-phase circuit, is in this case the least dangerous. It should be added that the mine wiring is equipped with specialized highly sensitive protection, the circuit of which responds to leakage current.

In addition, portable portable generator sets, which when working in the field do not have reliable grounding, have an isolated neutral. For this reason, in emergency power networks powered by autonomous generators, an IT grounding system can also be used. This scheme can take place in enterprises of a high category of reliability of power supply, using emergency power systems, for example, in medical institutions. Also, IT grounding can be found in a private house equipped with a backup power generator. Unfortunately, at home it is difficult to apply a highly sensitive system that detects minor leakage currents, like mine protection.

Electrical installations that use a system with an isolated neutral voltage of up to 1000 V, are usually used in cases where it is undesirable to disconnect the power supply when the first earth fault occurs. In such networks, emergency currents occur only when a second phase is shorted to ground, that is, during an interphase short circuit. For this reason, to fix the single-phase ground fault mode, an alarm system must be installed that responds to a small value of the leakage current. This is necessary to alert service personnel to an abnormal operation that needs to be addressed.

Briefly summarizing the features of the use of IT grounding, we can distinguish the following advantages:

The disadvantages of the IT grounding system are due to the same properties, namely:

Finally, we recommend watching a video on which IT grounding scheme and alternative power supply options are discussed in detail:

So we have provided a description of the IT grounding system. Now you know what its scope and principle of work is!