In what cases is the CT grounding system used

A common way to ensure safety when working with electrical equipment is grounding. In the PUE, in the list of measures to protect people from the effects of electric current, protective grounding is in the first place (paragraph 1.7.51, Chapter 1.7) This measure provides for the connection of open conductive parts of an electrical installation with a grounding device. Depending on the design features of electrical installations and networks, the ground loop can be organized in several ways. The system in accordance with which grounding is carried out is determined at the design stage or prescribed by the technical conditions issued by the power grid organization. The subject of this article is the TT grounding system, the principle of operation and the scope of which will be described in detail below.
Content:

General description and principle of operation

The application of the TT system extends to electrical networks whose neutral solidly grounded. The essence of this method is that the conductive parts of electrical equipment are connected to a grounding device located on the consumer side. There is no electrical connection between this device and the ground electrode to which the transformer neutral is connected at the substation.

The figure schematically shows the TT system, by which the building was grounded: 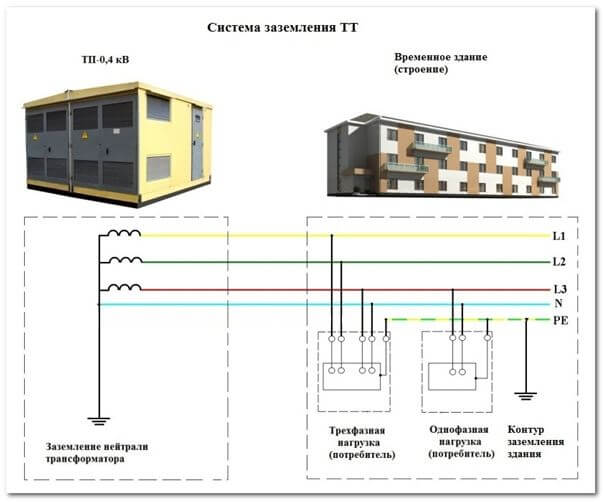 Consider in what cases this type of grounding is used. It should be noted that the TT system is in some way an extraordinary measure. A TN system is a system whose power source neutral is deafly grounded, and the exposed conductive parts of the electrical installation are connected to the source grounded neutral via zero protective conductors. (PUE p. 1.7.3). According to the same clause of the PUE, the TT system is called the system with a grounded neutral of the power source, but in contrast to the TN system, the open conductive parts of the electrical installation are grounded by a grounding device that is electrically independent of the grounded neutral of the source. The TN system has several varieties, the common design feature of which is the combination of the neutral grounding circuits of the transformer and consumer electrical installations. Protection carried out according to this principle is most easily implemented from the point of view of the consumer making the connection to the electric network. This system does not require the construction of a grounding device at the consumer site.

The use of CT earthing is prescribed only in cases where the TN system does not provide the necessary level of safety. Usually this occurs when the unsatisfactory technical condition of the supply air line, especially constructed on a temporary basis.Under such conditions, as a rule, there is a high probability of damage to the grounding conductor, that is, loss of electrical connection between the grounding device at the substation with the consumer's grounding circuits. This situation is fraught with the fact that in case of breakdown of insulation, the voltage of contact with the cases of electrical equipment may be equal to the operating voltage of the network. For this reason, the main scope of the CT scheme are facilities whose power supply is temporary. For example, construction sites, trailers, etc.

Quite often there are cases when the grounding of TT is used in a private house or in the country. The implementation of such a scheme is quite laborious, especially for a private owner. Perhaps, only specialists can solve the issues of how to make an earthing switch and install an RCD. Not every owner can build a grounding device that meets the requirements of the rules on their site. It can also be added to the above that the application of the system should be coordinated with the organization providing the power supply.

In accordance with clause 1.7.59 of the PUE, the operation of electrical equipment, the grounding of which is made according to the TT system, is prohibited without the use of RCDs. Figure 2 illustrates an RCD connection diagram. 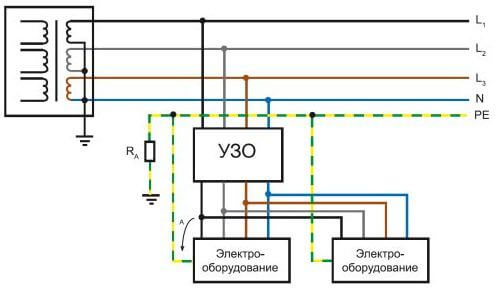 Residual Current Device (RCD), this is a protection system that shuts down the installation when it occurs leakage currentdue to insulation damage. This device responds to the difference of currents flowing along the phase and neutral wires, therefore it is called a differential current circuit breaker. If the insulation of the electrical installation is damaged, a shunt circuit is formed through the equipment casing to the ground. The result is a leakage current to earth.

The most important characteristic of a grounding device is its resistance. The requirement for this parameter, if the grounding is performed according to the CT system, can be expressed as follows (PUE p.1.7.59):

In this case, in the case of using several residual current circuit breakers, the differential response current of the device where it has the maximum value is taken into account.

In addition to this requirement, the basic potential equation system (p.1.7.60 PUE). The essence of the event is to interconnect the following structures:

We list the pros and cons that the TT grounding carries with it. A definite plus is a certain independence from possible damage to the power line in terms of safety. The presence of a local grounding device located in close proximity to grounding objects makes it extremely unlikely that a connection with it will break.

On the other hand, the construction of a full-fledged grounding device, which has the necessary characteristics, is a rather troublesome business, requiring excavation. This also needs to add the need to use an RCD, which complicates the scheme and requires additional financial costs.

Finally, we recommend watching useful videos on the topic:

Now you know in which cases the CT grounding system is used and what it represents as a whole. We hope this article was useful and interesting for you!