What is a current leak and how to find it?

Leakage of current into the ground is a fairly popular and popular concept. Most people use it in colloquial everyday life, but not everyone understands its physical nature and does not fully understand the scale of the harmful effects of this phenomenon. For people who are not knowledgeable in the intricacies of electrical engineering, it will be enough to know that this concept should be understood as the flow of current from phase to earth along an undesirable and inappropriate path, that is, along the body of the equipment, metal pipe or fittings, wet plaster of a house or apartment and other conductive structures. The conditions for leakage are a violation of the integrity of the insulation, which can be caused by aging, thermal stress, usually caused by overloading of electrical equipment or mechanical damage. In this article we will tell the readers of the site Elecroexpertwhat is the danger of current leakage in the apartment, what are the causes of its occurrence and protection measures at home.
Content:

Why is it dangerous?

Electrical insulation cannot be ideal, therefore, during the work of the consumer of electricity, even in the case of its full serviceability, current leakage always takes place, the magnitude of which is meager and does not pose a danger to humans. In the event of a partial or complete violation of insulation, the values ​​of current leakage increase and can be a serious threat to human health and life. Simply put, in the event of loss of insulation resistance when touching the body of an electrical device, cable sheath, plug or socket, water pipe or heating system, wall of a house or apartment, the human body will act as a conductor through which leakage currents pass to the ground. The consequences can be very sad, even fatal. 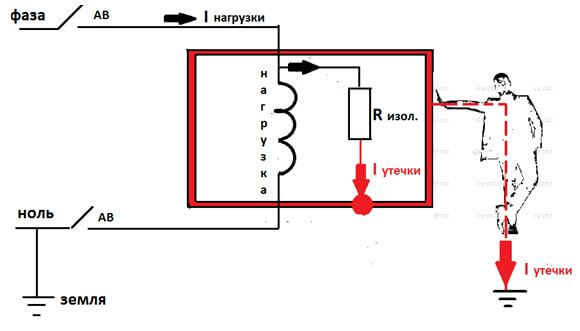 Possessing the concept of what is a leakage of electricity, the causes of the occurrence and the accompanying dangerous consequences, the owner of a house or apartment does not interfere with knowing how to determine electrical equipment with reduced insulation resistance. To begin with, you should firmly grasp if, when you touch an electric device, pipelines or walls in a room, even a barely perceptible impact of electricity is felt, a current leakage occurs in the electrical network of the house or apartment. Loss of insulation resistance can occur both in faulty consumers of electricity and in wiring. A common sign of a hazard is whenelectric shock in the bathroom.

How to determine if the appliance is damaged?

A megohmmeter is a classic means of measuring insulation resistance, but since such a device is rather rare in household goods, for this purpose you can use the simplest and most affordable means of measurement, such as a voltage indicator and a multimeter.

Another option is to check for current leakage with a voltage indicator. This verification method can be used if the device under test has a metal shell. In case there are doubts about the serviceability and safety of using the device, the presence or absence of leakage can be checked with an indicator screwdriver designed to search for a phase in the network. To do this, when the consumer is turned on, touch the tip of the indicator screwdriver to the metal case of the electrical device, if even a weak detection of the phase finder occurs, the consumer being tested is defective and is dangerous. More about how to use an indicator screwdriver, we told in a separate article. 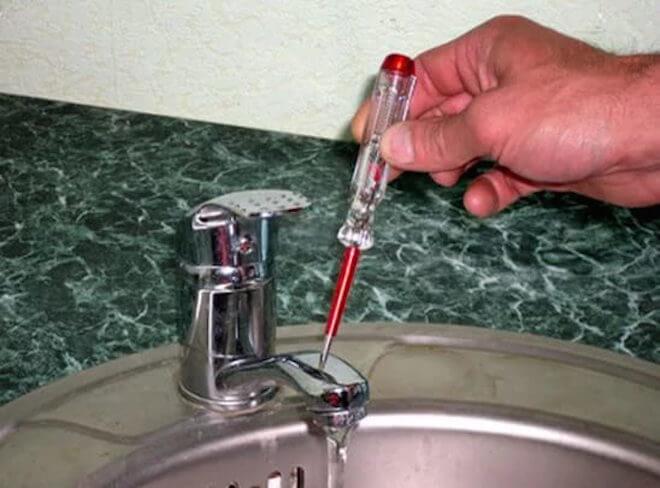 Leakage of current to the housing in a device with a metal sheath can be caused not only by a loss of insulation resistance. The reason for this may be an open jumper grounding the metal body of the product, in the event that a grounding system is provided.

Important! During the inspection, care must be taken to prevent touching the metal body of the product and the tip of the screwdriver with your hands.

Check with a multimeter. Insulation Test multimeter is made only on de-energized equipment. Before checking, the measuring device must be switched to the resistance measurement mode at 20 megohms. Fix the multimeter probe on the body of the product under test, the second one on one of the contact pins of the plug. The same operation must be done for the second contact pin and with the replacement of the polarity of the probes. On working electrical equipment, infinity should be displayed on the scale of the measuring device. Otherwise, you cannot use electrical equipment, it must either be returned for repair or disposed of. Multimeter instruction manual we also reviewed the site. 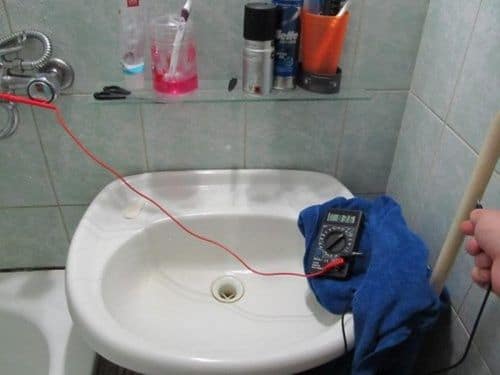 Check with a megger. The verification procedure is the same as in the case of the multimeter. Using a megger, you must remember that when you rotate the handle at the output of this device, a voltage of 500 to 1000 Volts is generated, which can permanently disable low-current electronic components. 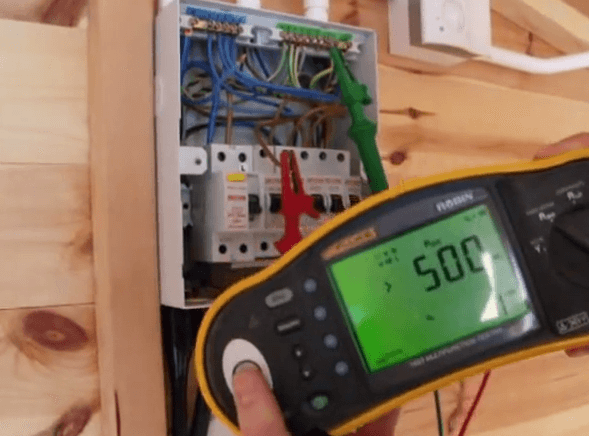 About, how to use a megaohmmeter, we told in a separate article on the site!

A leak in the hidden wiring of a house or apartment can cause electric shock during wall plastering or wallpapering. How to detect it without involving specialists and using special devices. There is a proven way to check for leaks in the hidden wiring of a house or apartment using a transistor radio that has medium and long wavelength reception ranges. Before checking, it is necessary to turn off all consumers of electricity. Next, you need to walk with the receiver, pre-tuned to the frequency at which there is no broadcasting of radio stations, in the immediate vicinity of the walls in the places of wiring. When approaching a problem place, the receiver speaker will begin to characteristically sound.

In order to reliably exclude cases of electrical injuries in the house, it is necessary to equip the home electrical network with leakage protection equipment, which is currently widely used residual current circuit breakers (RCDs) and differential circuit breakers. About, how to choose an RCD by current, we told in a separate article.

An alternative is to use differential automatonwhich combines an RCD and a circuit breaker.Difavtomat will also help protect against an adverse event, because the network will instantly work and de-energize in case of danger.

To learn more about why RCDs should be used, see the video:

So we examined what a current leakage is in an apartment and a house, what are the causes of its occurrence, as well as protective measures at home. We hope the information was useful and interesting for you!