What is difavtomat and what is it used for?

Differential automatic machine is a low-voltage combined electric device that combines in one case the functions of two protective devices - an RCD and a circuit breaker. Due to this, this product is quite popular and is widely used both in domestic conditions and in production. In this article we will consider the device, purpose and principle of operation of the difavtomat.
Content:

Let us briefly consider why a difavtomat is needed. Its appearance is depicted in the photo: 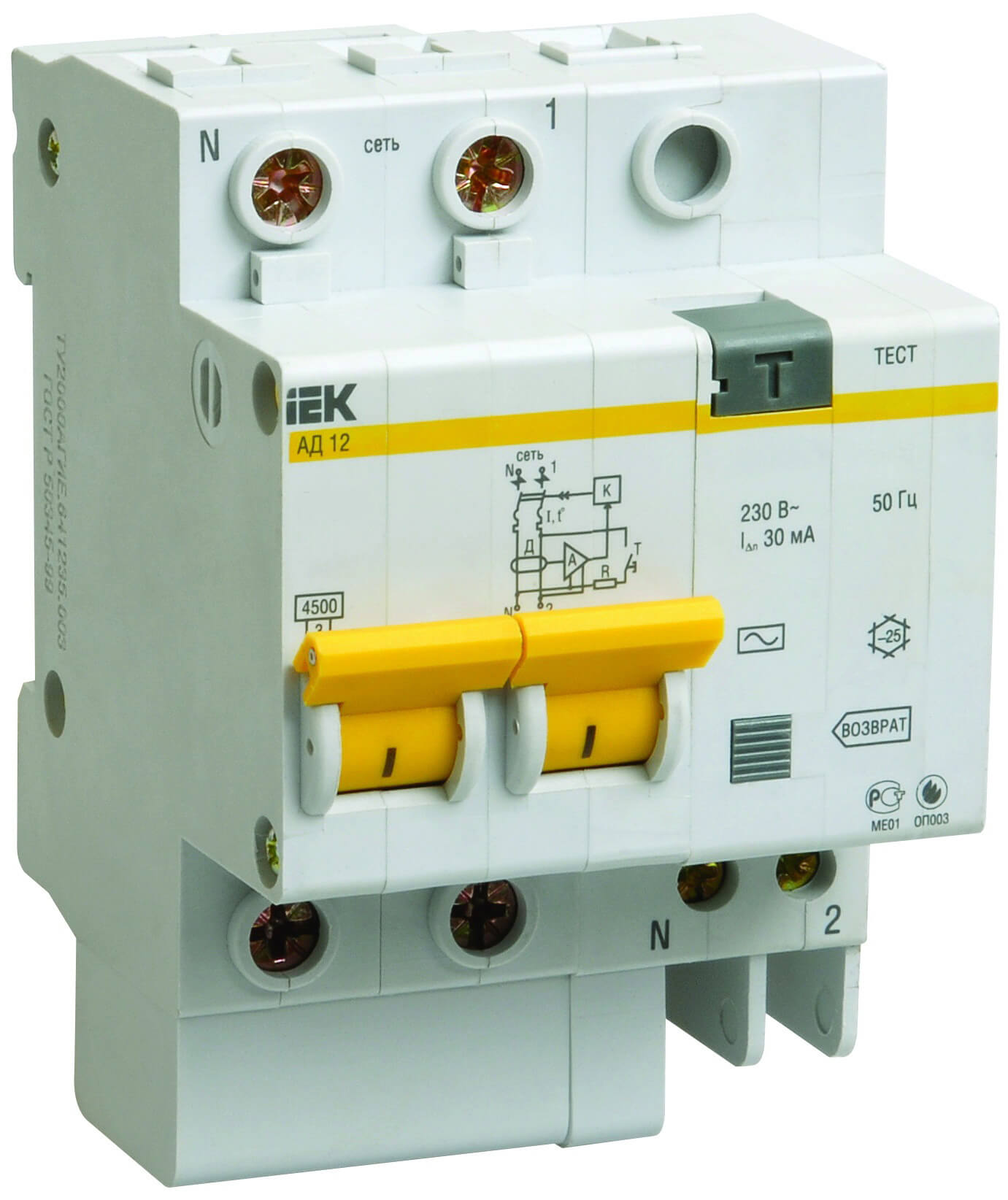 Firstly, this electrical apparatus serves to protect a section of the electrical network from damage due to overcurrents flowing through it, which occur during overload or short circuit (circuit breaker function). Secondly, the differential machine prevents the occurrence of fire and electric shock due to electricity leakage through damaged insulation of the cable of the wiring line or a faulty household appliance (function of the residual current device).

To begin with, we give the designation in the diagram according to GOST, according to which it is clearly visible what the difavtomat consists of: 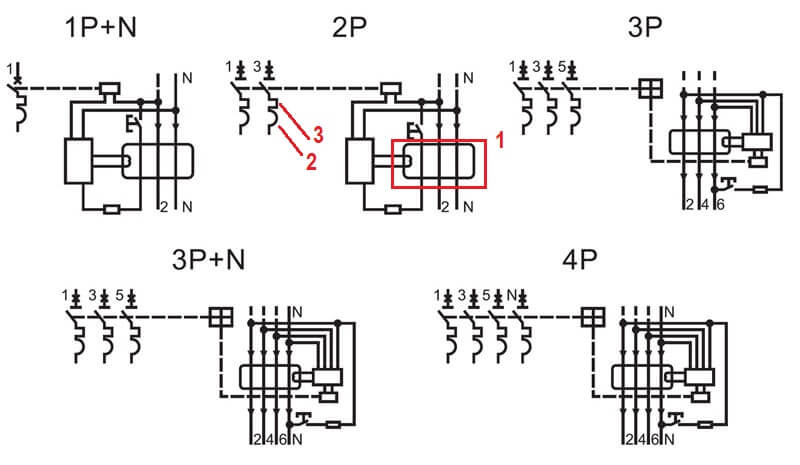 The designation shows that the main structural elements of the difavtomat are a differential transformer (1), electromagnetic (2) and thermal (3) releases. Below, we briefly describe each of the above elements.

A differential transformer has several windings, depending on the number of poles of the device. This element compares the load currents along the conductors and in case of their asymmetry, the so-called leakage current appears at the output of the secondary winding of the transformer. He arrives at the starting body, which, without delay, carries out the tripping of the power contacts of the machine.

Also worth mentioning is the “TEST” protective device operability check button. This button is connected in series with the resistance, which is turned on either by a separate winding on the transformer or in parallel with one of the available ones. When you press this button, the resistance creates an artificial current imbalance - a differential current occurs and the differential machine should work, which indicates its good condition.

The electromagnetic release is an electromagnet with a core that acts on the trip mechanism. This electromagnet is triggered when the load current reaches the threshold - usually this happens whenshort circuit. This release is instantaneous, in fractions of a second.

The thermal release protects the electrical network from overload. Structurally, it is a bimetallic plate, which is deformed when a load current flowing through it exceeds the nominal for this unit.Upon reaching a certain position, the bimetallic plate acts on the shutdown mechanism of the difavtomat. The release of the thermal release does not occur immediately, but with a time delay. The response time is directly proportional to the magnitude of the load current flowing through the differential machine, and also depends on the ambient temperature.

On the case the differential transformer response threshold is indicated - leakage current in mA, rated current of the thermal release (at which the unlimited time works) in A. Example of marking on the case - C16 A / 30 mA. In this case, the marking “C” in front of the nominal value indicates the frequency of operation of the electromagnetic release (apparatus class). The letter “C” indicates that the electromagnetic release will trip if the rating 16A is exceeded 5-10 times.

The video below describes in detail how the difavtomat works and what it consists of:

Why use a differential machine if there are two separate protective devices (RCD and automatic), each of which performs its own function?

The main advantage of the difavtomat is compactness. It takes up less space on DIN rail in the electrical switchboard than in the case of installing two separate devices. This feature is especially relevant if it is necessary to install several residual current circuit breakers and circuit breakers in the switchboard. In this case, by installing difavtomatov it is possible to significantly save space in the switchboard and, accordingly, reduce its size. 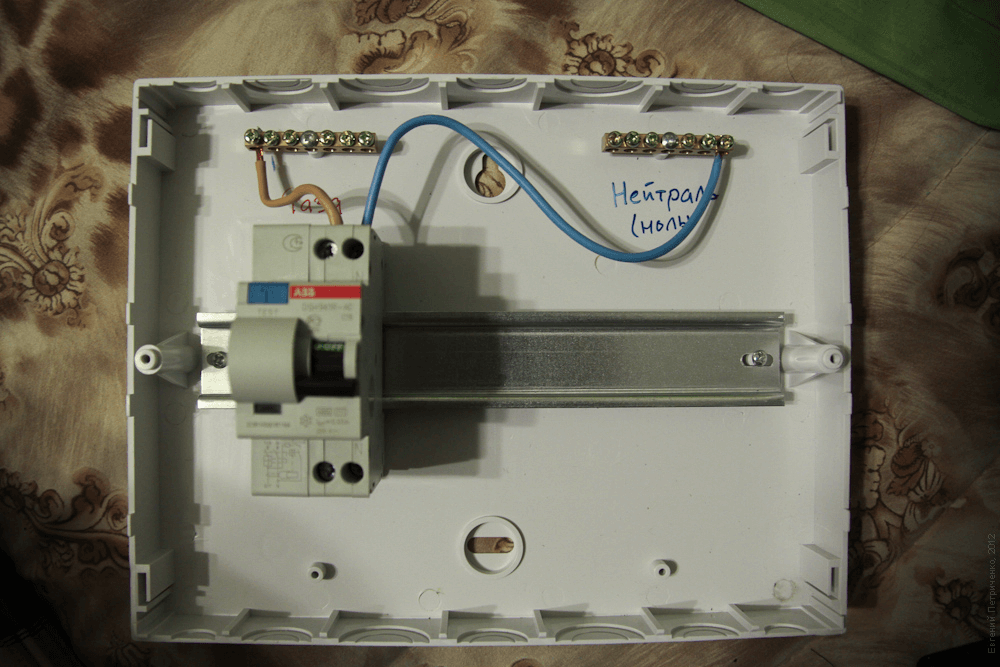 Differential automatic machine is widely used to protect electrical wiring almost everywhere, both in everyday life and in rooms for other purposes (in various institutions, at enterprises).

Difavtomat is in no way inferior to RCDs and a circuit breaker similar in characteristics, so there are no restrictions in its use. This protective device can be installed both on the input (as a backup) and on the outgoing wiring lines to ensure fire safety, human safety in relation to electric shock, and also to protect against overcurrents.

So we examined the device, purpose and principle of operation of the difavtomat. We hope the information provided was useful and interesting for you!