What is cable burning and how is it performed

During the operation of electrical installations, malfunctions periodically arise associated with both electrical equipment and power lines. The insulation loses its parameters over time, cracks or is damaged in another way. As a result of this, current leak either to the screen or to another core. To find the fault, disconnect the ends of the cable and ring, check insulation resistance with a megger. If the resistance measurement yields unsatisfactory results, it is concluded that the line needs repair. Burning the cable is a responsible and complex technological task. The main thing is not to damage the serviceable part of the cable, as then it will be necessary to replace it completely. With proper burning, the repair of the line consists in removing the faulty section and replacing it with a working cable with couplings. If the coupling is damaged, a cable extension may also be required. Next, we will tell the readers of the site Electricianhow the cable is burned and what settings are used for this.
Content:

In principle, two types of damage are distinguished - a break in the cable or one of its cores and a short circuit. However, the closure is not so simple, it can be low-resistance and high-resistance. In the first case, the usual call will show short circuit, in the second - no. To reduce the resistance of the damaged place, it is necessary to burn through the insulation until a low-resistance circuit is formed or a single-phase circuit is converted into a 2-3-phase circuit.

The initial stage of cable burning occurs at high voltage, but with low current. Under the action of high voltage, an insulation breakdown occurs and current flows. Gradually, the breakdown voltage of the insulation decreases along with the resistance of the damaged area. As the current increases and the resistance decreases, they lower the burning voltage and increase the current. So they achieve a decrease in resistance from tens of ohms to a few tens of ohms. The voltage is reduced to limit burning power. This process is carried out both at constant and at alternating current, the operation algorithms of the installation depend on the specific model.

Burning the cable allows you to localize the damaged area, both visually and by the smell of burning and other consequences of the process. 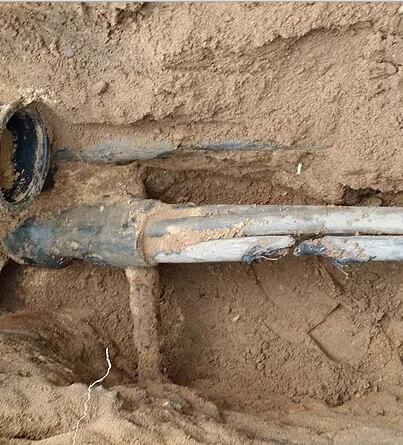 Among typical situations, breakdown in the coupling can be distinguished. Then, burning is characterized by a decrease in resistance during the execution of work and a reverse increase after its completion. Another case is when the damaged area is under water and an almost constant current flows, and the resistance of the damaged area remains within 2-3 kOhm. After burning, they search for the damaged area using the acoustic or induction method.

When burning cables under high voltage, breakdowns occur, and after 5-10 minutes of repeating the procedure, the breakdown voltage decreases, then the installation is transferred to another stage of burning.

If during the burning of the place of damage to the power cables the breakdown voltage is back increased, the installation is again transferred to a higher voltage and so on until they achieve stable low-resistance results and the formation of a reliable metal bridge between the conductors.

To destroy a metal compound resulting from a breakdown, pulsed electrodynamic effects are used, for example, by discharging the capacity of two serviceable cores into a third and a screen. Or use the capacitance of a battery of capacitors charged to high voltage (about 5 kV) and capacities up to 200 uF. The discharge energy is directly proportional to the capacity.

During the initial high-voltage burning, the currents are fractions and units of amperes, and with further lowering the voltage, the current increases to hundreds of amperes. This procedure is carried out by specialists from the electric laboratory.

The picture shows one of the cable burning schemes where the lower core is damaged:

Settings for burning and cable diagnostics

Such installations weigh quite a lot, and you have to look for a damaged cable anywhere: in the tunnel, and underground, and in the cable assembly. Therefore, electric laboratories usually equip mobile units based on cars or buses. In addition to installation, the car is equipped with a gasoline or diesel generator. 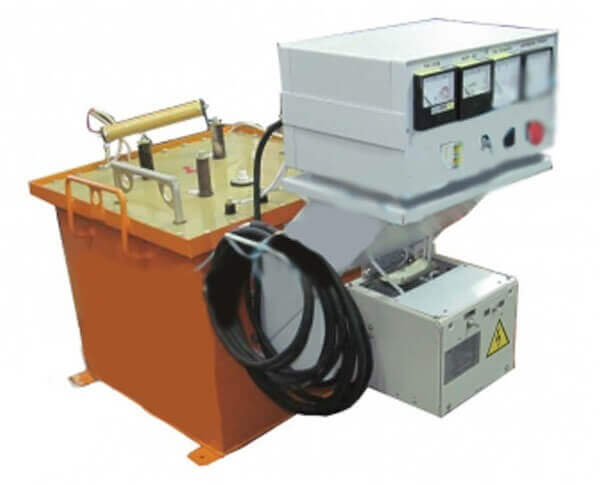 Installations for burning the place of damage to power cables are usually not universal, designed for a specific series of voltages, stepwise adjustable or without adjustment steps. Here are a few examples:

The video below clearly shows how the installation for burning the UPI-10 cable works: