Damage to the electric cable, regardless of whether it is underground and supplies, say, a transformer substation of several residential buildings, or in a wire laid by hidden wiring in an apartment, requires finding and prompt repair. During operation and at the stage of installation of cable lines laid underground, unforeseen mechanical damage to the insulation and live conductors occurs. This may be due to a violation of normal operating conditions, inaccurate installation work on other utilities located a few meters from the installation site and not related to the power supply line. In the apartment hidden wiring often damaged during repairs. One of the reasons that combines both situations is the defect in cable and wire products made at the manufacturing stage. But be that as it may, it is necessary to find a fault in the line. How to search for the place of cable damage underground and in the wall, we will describe further by providing existing methods and devices for detecting an emergency section.
Content:

Methods for determining cable damage in the ground

To find the place of damage to the cable line, it is necessary to understand the specifics and methodology of the search. The process must be divided into two stages:

In view of the differences between these two stages, the search methods themselves differ and are:

Well, consider all the methods in order.

This method involves searching for damage using an OTDR. Work can be carried out, for example, with the REIS-305 device, which is shown in the photo below. 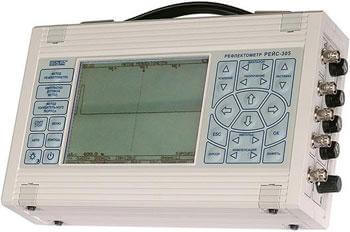 The operation of the device is based on the sending of probe pulses of a certain frequency, which, when they meet an obstacle in their path, are reflected and returned back to the device. That is, the device is located at one end of the power cable, which is very convenient and practical. To calculate the exact distance to the place of damage, you must use the following formula:

Where, according to the formula, L - cable length from the connection point of the device to damage, tx - a variable value of the amount of time spent so that the impulse reaches the point of the cliff and vice versa. υ - the speed with which the pulse follows the cable (for cable lines from 0.4 kV to 10 kV is 160 m / μs).

In this way, it is possible to detect not only a break in the power cable, but also a short circuit between the conductors. To understand what happened, we turn to the image on the screen during the test.Pictures will be as follows (left circuit, open circuit to the right): 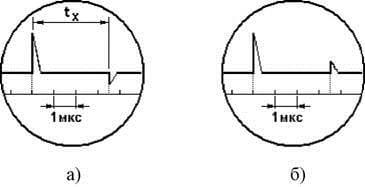 Tests should be carried out on a completely disconnected line. The video example demonstrates how to use the short circuit location finder:

Instructions for use of the ISKRA-3M reflectometer

This method is applicable provided that at least one wire in the cable remains intact, or another conductor with whole wires lies nearby. To find out the distance to the place of damage by the loop method, you need to measure the resistance of the cores to DC with a P333 device. This is a direct current measuring bridge that looks like this: 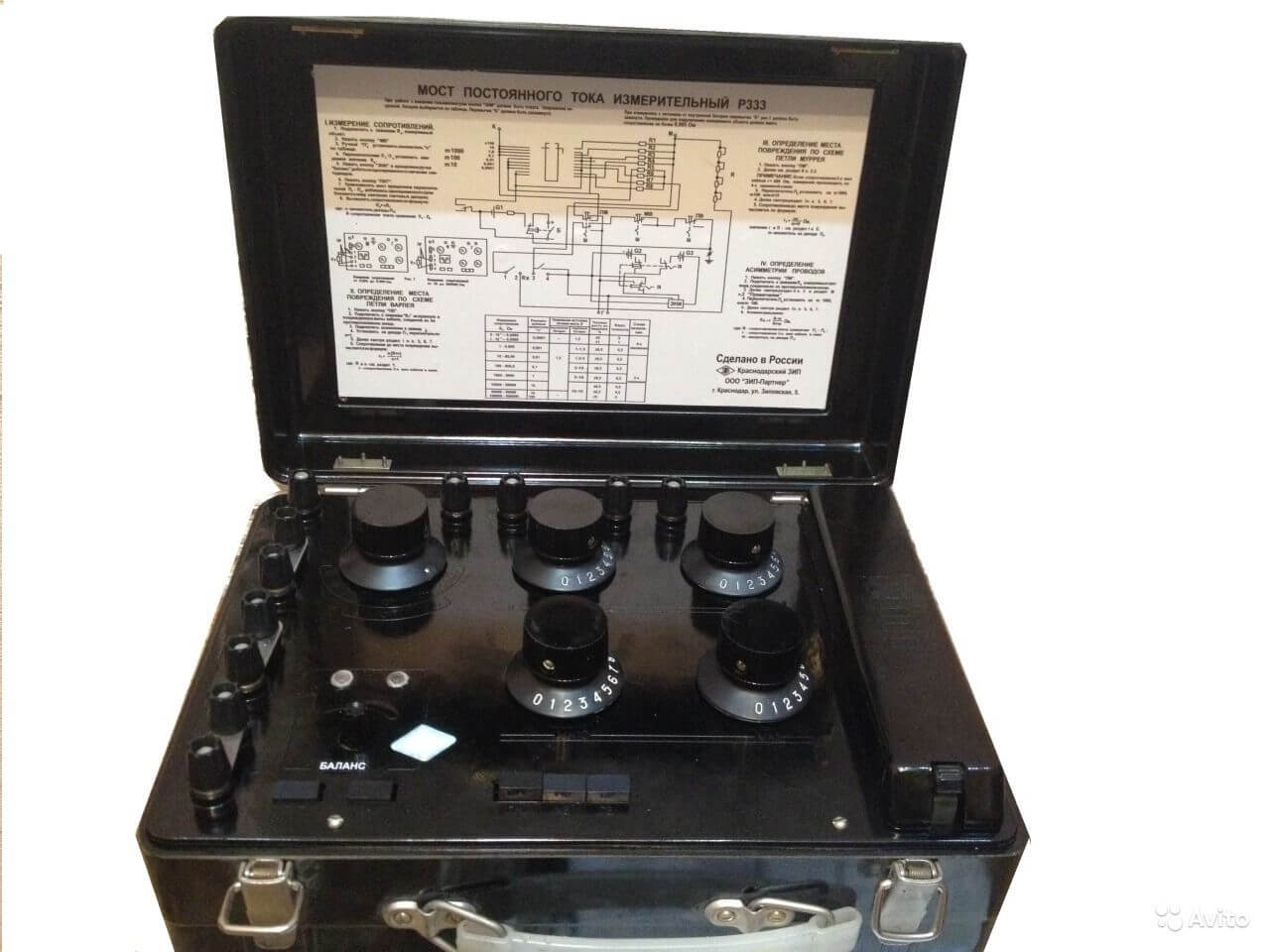 Calculate the distance to the point at which a break occurred, using the following formula:

This is perhaps one of the first invented methods used to find the place of damage, and it is used exclusively for single-phase and two-phase closures. Gradually, they cease to use it, due to its complexity and great measurement error.

You can find a break in the cable by the acoustic method by creating a discharge at the site of damage using a high-voltage pulse generator (in the picture below). At the point of open or short circuit, sound vibrations of a certain frequency will appear. The quality of listening depends on the type of soil, the distance from the surface to the cable line and the type of damage. A prerequisite for the operation of the method is to exceed the value of the transition resistance of 40 Ohms. 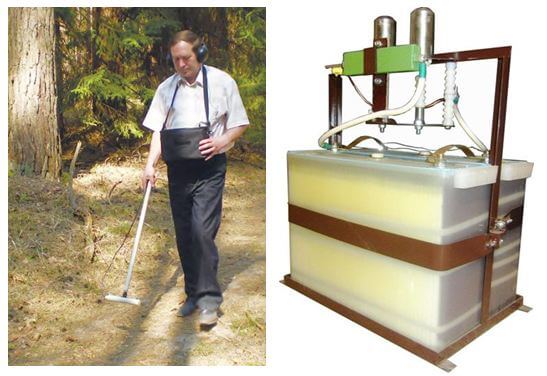 An example of searching for a damaged line in an acoustic way is provided in the video:

The method is based on passing the current generated by the generator through the cable. It creates a potential difference between two points located in the ground, which can be judged by leakage current at the scene of the accident. To find a point with a reduced insulation resistance, the contact probes are installed like this - the first exactly above the passing conductor, the second at an angle of 900 in meter from the first. 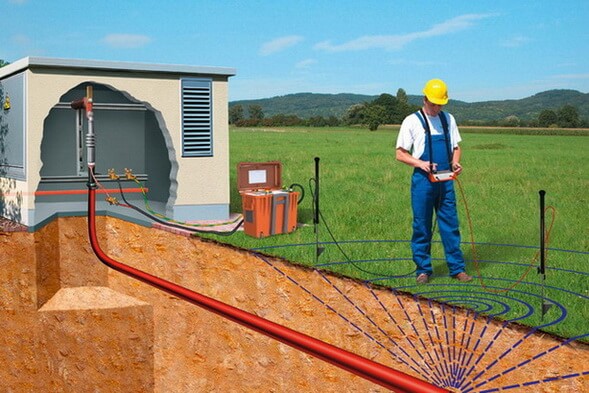 The point where the cable is damaged is under the first pin, provided that the signal is at its maximum. More about step voltage You can find out from our article!

The method very accurately determines the location of the cliff, however, its use is associated with burning the cable. With a large transition resistance, it is necessary to reduce its value by burning, using special devices, for example, installing a burning cable VUPK-03-25: 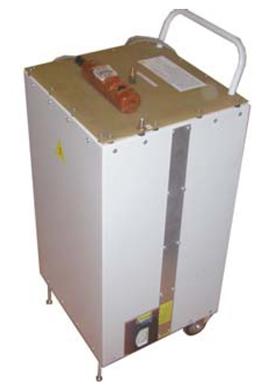 The method is based on passing a high frequency current through the core, which forms an electromagnetic field above the cable line. In places of mechanical damage to the track, conducting the receiving frame, the sound will change. Thus, the absence of sound indicates a broken wire. 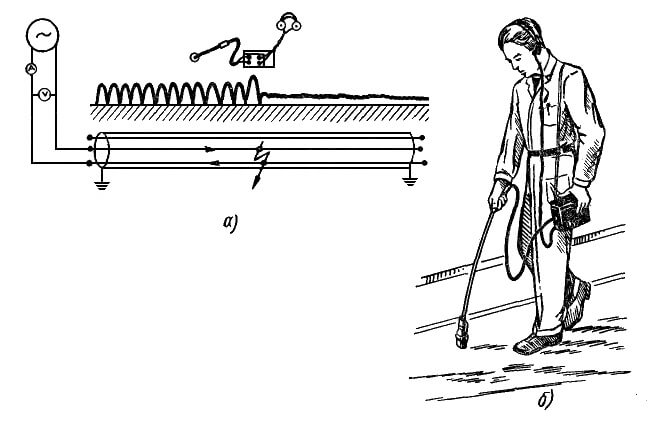 The video below demonstrates the location of the emergency site by burning:

Search for a cliff of hidden wiring in a concrete wall

The place of wire breakage in a concrete wall will help to find a special device - a locator. It is a combination of receiver and generator. This method can be associated with the induction method in the search for cable damage underground. 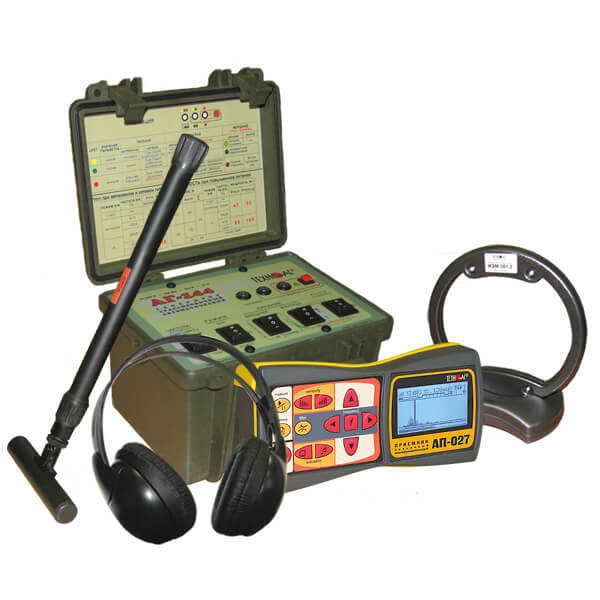 So, it is not difficult to determine the place of the cliff by the route finder. The end of the wire, in which there is an open circuit, is connected to a generator, which sends pulses of a certain frequency to it. Passing the frame at the place of wiring, in the headphones you will clearly hear the sound that is formed as a result of exposure to pulses. As soon as the sound disappears, mark this place on the wall - this will be the point of damage to the wire.

Contactless will also help to find a break in the phase wire voltage indicator. Everything is simple here. We drive the device along the wall until the voltage indicator stops lighting. We conduct the device several times in a circle in this area of ​​the wall to make sure that we have not left the route of the wires. The absence of a glow of the indication will indicate the approximate location of the cliff. 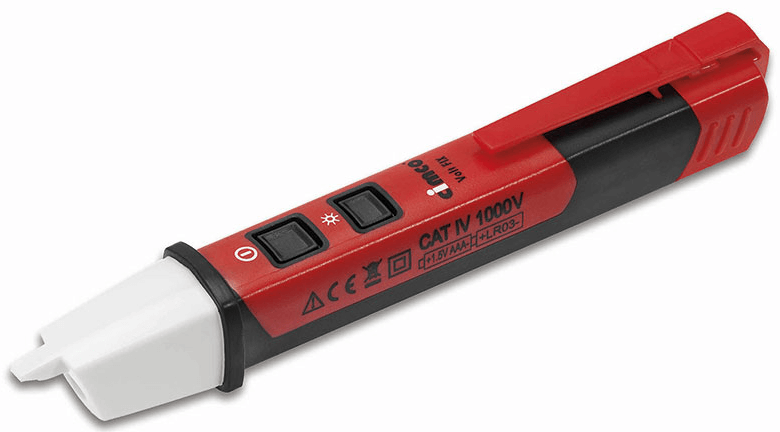 In conclusion, I would like to note that the tracer and non-contact voltage indicator can be used to find damage to the wiring under the plaster or under drywall.

Finally, we recommend watching a useful video on finding short circuit in the wiring:

Determination of a short circuit in a wall

So we examined the most famous methods for finding the place of cable damage. We hope the information was useful and interesting for you!

Instructions for use of the ISKRA-3M reflectometer
Acoustic Instrument Use
Cable line burn
Determination of a short circuit in a wall
Posted: 06.09.2016 Updated: 27.09.2017 3 comments