To describe the processes in physics and chemistry, there are a number of laws and relationships obtained experimentally and computationally. Not a single study can be carried out without a preliminary assessment of processes by theoretical relations. The laws of Faraday are applied both in physics and in chemistry, and in this article we will try to briefly and clearly tell about all the famous discoveries of this great scientist.
Content:

Faraday’s law in electrodynamics was discovered by two scientists: Michael Faraday and Joseph Henry, but Faraday published the results of his work earlier - in 1831.

In his demonstration experiments in August 1831, he used an iron torus, on the opposite ends of which a wire was wound (one wire per side). He supplied power to the ends of one first wire from a galvanic battery, and connected a galvanometer to the terminals of the second. The design was similar to a modern transformer. Periodically turning the voltage on and off on the first wire, he observed surges on the galvanometer.

A galvanometer is a highly sensitive instrument for measuring the strength of small currents.

Thus, the influence of the magnetic field generated by the flow of current in the first wire on the state of the second conductor was depicted. This effect was transmitted from the first to the second through the core - a metal torus. As a result of research, the influence of a permanent magnet, which moves in the coil, on its winding was also discovered. 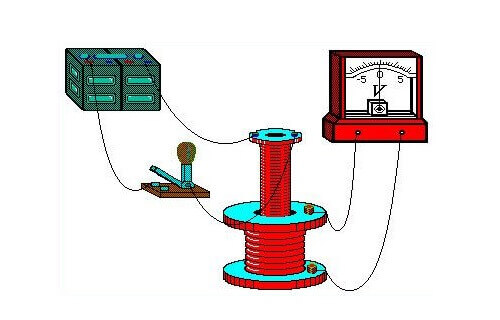 Then Faraday explained the phenomenon of electromagnetic induction in terms of lines of force. Another was the installation for generating direct current: a copper disk rotated near the magnet, and the wire sliding along it was a current collector. This invention is called Faraday’s disk.

Scientists of that period did not recognize the ideas of Faraday, but Maxwell took the research for the basis of his magnetic theory. In 1836, Michael Faraday established relationships for electrochemical processes, which were called the Laws of electrolysis of Faraday. The first describes the ratios of the mass of matter allocated to the electrode and the flowing current, and the second describes the ratios of the mass of the substance in solution and the mass of the current allocated to the electrode for a certain amount of electricity.

The first works are used in physics, specifically in the description of the operation of electrical machines and apparatuses (transformers, motors, etc.). Faraday’s Law states:

For the circuit, the induced EMF is directly proportional to the magnitude of the velocity of the magnetic flux, which moves through this circuit with a minus sign.

This can be said in simple words: the faster the magnetic flux moves through the circuit, the more emf is generated at its terminals.

The formula is as follows:

Here dF is the magnetic flux, and dt is the unit of time. The first time derivative is known to be speed.That is, the speed of movement of the magnetic flux in this particular case. By the way, it can move, like a source of a magnetic field (a coil with a current - an electromagnet, or a permanent magnet), and a circuit.

Here, the flow can be expressed by the following formula:

B is the magnetic field, and dS is the surface area.

If we consider a coil with tightly wound turns, while in the number of turns N, then the Faraday law is as follows:

Magnetic flux in a one-revolution formula, measured in Weber. The current flowing in the circuit is called induction.

Electromagnetic induction is a phenomenon of current flow in a closed circuit under the influence of an external magnetic field.

In the formulas above, you could notice the signs of the module, without them it has a slightly different look, such as was said in the first formulation, with a minus sign.

The minus sign explains the Lenz rule. The current arising in the circuit creates a magnetic field, it is directed opposite. This is a consequence of the law of conservation of energy.

The direction of the induction current can be determined by the rule of the right hand or gimlet, we examined it on our site in detail. 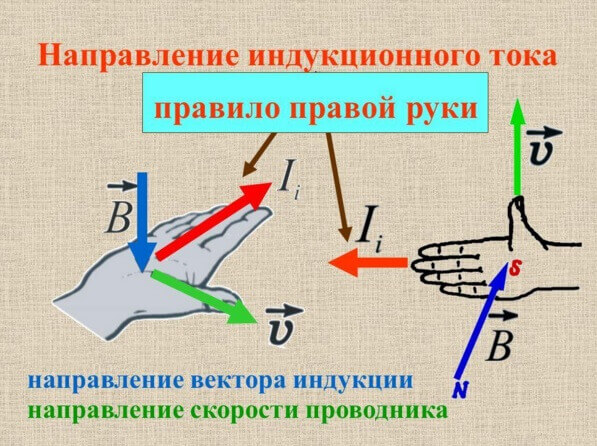 As already mentioned, due to the phenomenon of electromagnetic induction, electric machines, transformers, generators and motors work. The illustration shows the flow of current in the armature winding under the influence of the stator magnetic field. In the case of the generator, when the rotor rotates by external forces, an EMF appears in the rotor windings, the current generates a magnetic field directed in the opposite direction (the same minus sign in the formula). The greater the current consumed by the load of the generator, the greater the magnetic field, and the more difficult its rotation. 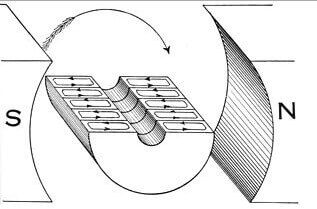 And vice versa - when current flows in the rotor, a field appears that interacts with the stator field and the rotor begins to rotate. With a load on the shaft, the current in the stator and in the rotor rises, and it is necessary to ensure the switching of the windings, but this is another topic related to the arrangement of electrical machines.

If you want to study the issue in more detail, we recommend watching a video on which the Faraday Law for electromagnetic induction is easily and easily described:

In addition to research on EMF and electromagnetic induction, the scientist made great discoveries in other disciplines, including chemistry. 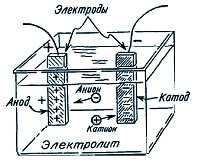 Faraday conducted experiments, passing a different current through the electrolyte and measuring the mass of matter deposited on the electrodes, deduced the patterns.

m is the mass of the substance, q is the charge, and k is dependent on the composition of the electrolyte.

A charge can be expressed in terms of current over a period of time:

Now you can determine the mass of the substance that will be released, knowing the current and the time that it flowed. This is called the First Law of Faraday Electrolysis.

The mass of the chemical element that settles on the electrode is directly proportional to the equivalent mass of the element (molar mass divided by a number that depends on the chemical reaction in which the substance is involved).

Based on the foregoing, these laws are combined into the formula:

In reality, due to various reasons, the mass of the released substance is less than the calculated one (when calculating the current flow). The ratio of theoretical and real masses is called current efficiency:

And finally, we recommend that you look at a detailed explanation of the Faraday law for electrolysis:

The laws of Faraday made a significant contribution to the development of modern science, thanks to his work we have electric motors and electric power generators (as well as the work of his followers). The work of EMF and the phenomena of electromagnetic induction gave us most of the modern electrical equipment, including loudspeakers and microphones, without which it is impossible to listen to recordings and voice communication. Electrolysis processes are used in the galvanic method of coating materials, which carries both decorative value and practical value.