In electrostatics, one of the fundamental is Coulomb's law. It is used in physics to determine the interaction force of two fixed point charges or the distance between them. This is a fundamental law of nature, which does not depend on any other laws. Then the shape of the real body does not affect the magnitude of the forces. In this article, we will describe in simple terms the Coulomb law and its application in practice.
Content:

Sh.O. The pendant in 1785 for the first time experimentally proved the interactions described by law. In his experiments, he used special torsion scales. However, back in 1773, it was proved by Cavendish, using the example of a spherical capacitor, that there is no electric field inside the sphere. This suggests that the electrostatic forces vary with the distance between the bodies. To be more precise, the squared distance. Then his studies were not published. Historically, this discovery was named after Coulomb, and the quantity in which the charge is measured has a similar name.

It sounds short, but it may not be clear to everyone. In simple words:The greater the charge the bodies have and the closer they are to each other, the greater the strength.

And vice versa:If you increase the distance between the charges - the force will become less.

The formula of the Coulomb rule looks like this:

The designation of the letters: q is the magnitude of the charge, r is the distance between them, k is the coefficient, depends on the selected system of units.

The magnitude of the charge q can be conditionally positive or conditionally negative. This division is very arbitrary. When the bodies touch, it can be transmitted from one to another. It follows that the same body can have a charge of a different magnitude and sign. A point charge is a charge or body whose dimensions are much smaller than the distance of a possible interaction.

It should be borne in mind that the medium in which the charges are located affects the F interaction. Since it is almost equal in air and in vacuum, the discovery of Coulomb is applicable only to these media, this is one of the conditions for applying this type of formula. As already mentioned, in the SI system the unit of charge is the Coulomb, abbreviated Cl. It characterizes the amount of electricity per unit time. It is derived from the basic SI units.

It is worth noting that the dimension of 1 C is excessive. Due to the fact that the carriers repel each other, it is difficult to keep them in a small body, although the current in 1A is small, if it flows in the conductor. For example, a current of 0.5 A flows in the same 100 W incandescent lamp, and more than 10 A flows in an electric heater. Such a force (1 C) is approximately equal to the mass of 1 ton acting on the body from the side of the globe.

You may have noticed that the formula is practically the same as in gravitational interaction, only if masses appear in Newtonian mechanics, then charges in electrostatics.

Coulomb formula for a dielectric medium

The coefficient taking into account the values ​​of the SI system is determined in N2* m2/ Cl2. It is equal to:

In many textbooks, this coefficient can be found in the form of a fraction:

Here e0= 8.85 * 10-12 Kl2 / N * m2 - this is the electric constant. For a dielectric, E is the dielectric constant of the medium, then the Coulomb law can be used to calculate the forces of interaction of charges for vacuum and medium.

Given the influence of the dielectric, it has the form: 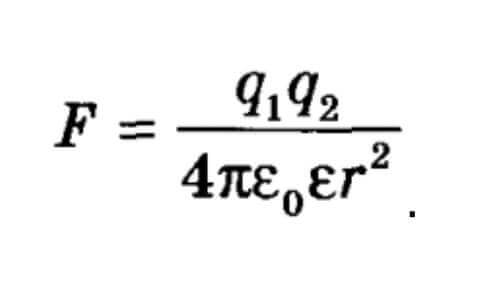 From here we see that the introduction of a dielectric between bodies reduces the force F.

How are forces directed

The charges interact with each other depending on their polarity - the identical ones repel, and the opposite (opposite) are attracted. 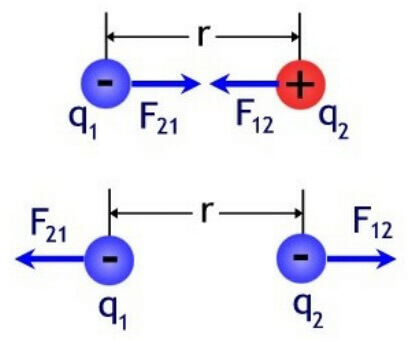 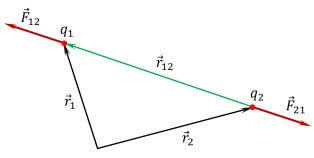 By the way, this is the main difference from the similar law of gravitational interaction, where bodies are always attracted. The forces are directed along the line drawn between them, called the radius vector. In physics, denoted as r12 and as a radius vector from the first to the second charge and vice versa. The forces are directed from the center of the charge to the opposite charge along this line, if the charges are opposite, and in the opposite direction, if they are of the same name (two positive or two negative). In vector form:

The force applied to the first charge from the side of the second is denoted as F12. Then in vector form Coulomb's law is as follows:

To determine the force applied to the second charge, the notation F21 and R21.

If the body has a complex shape and it is large enough that at a given distance it cannot be considered point, then it is divided into small sections and each section is considered as a point charge. After geometric addition of all the resulting vectors, the resulting force is obtained. Atoms and molecules interact with each other according to the same law.

Coulomb's work is very important in electrostatics; in practice, it is used in a number of inventions and devices. A striking example is the lightning rod. With its help, buildings and electrical installations are protected from thunderstorms, thereby preventing fire and equipment failure. When it rains with a thunderstorm on the earth an induced charge of a large magnitude appears, they are attracted to the side of the cloud. It turns out that a large electric field appears on the surface of the earth. Near the tip of the lightning rod, it has a large value, as a result of this, a corona discharge is ignited from the tip (from the ground, through the lightning rod to the cloud). The charge from the earth is attracted to the opposite charge of the cloud, according to the law of Coulomb. Air is ionized, and the electric field decreases near the end of the lightning rod. Thus, charges do not accumulate on the building, in which case the probability of a lightning strike is small. If a blow to the building does occur, then through lightning protection all the energy will go to the ground.

In serious scientific research, the greatest construction of the 21st century is used - the particle accelerator. In it, an electric field does the work of increasing the particle energy. Considering these processes from the point of view of the impact on a point charge by a group of charges, then all the relations of the law are valid.

Finally, we recommend watching a video that provides a detailed explanation of the Coulomb Law: