Joule-Lenz law: its formulation and application

In 1841 and 1842, independently from each other, English and Russian physicists established the dependence of the amount of heat on the flow of current in the conductor. This dependence was called the "Joule-Lenz Law." The Englishman established dependence a year earlier than Russian, but the law received its name from the names of both scientists, because their studies were independent. The law is not theoretical, but has great practical significance. And so let's briefly and clearly find out the definition of the Joule-Lenz law and where it applies.
Content:

In a real conductor, when current flows through it, work is performed against friction forces. Electrons move through a wire and collide with other electrons, atoms and other particles. As a result, heat is generated. The Joule-Lenz law describes the amount of heat released when current flows through a conductor. It is directly proportional to the current strength, resistance and flow time.

In integral form, the Joule-Lenz law looks like this:

The current strength is denoted by the letter I and is expressed in Amperes, Resistance - R in Ohms, and time t - in seconds. The unit of measure of heat Q - Joule, to convert to calories you need to multiply the result by 0.24. In this case, 1 calorie is equal to the amount of heat that needs to be brought to pure water in order to increase its temperature by 1 degree.

Such a formula entry is valid for a circuit section with a series connection of conductors, when one current flows in them, but different voltage drops at the ends. The product of the current squared by the resistance equals power. At the same time, power is directly proportional to the square of the voltage and inversely proportional to the resistance. Then for an electrical circuit with a parallel connection, the Joule-Lenz law can be written as:

Where j is the current density A / cm2, E is the electric field strength, sigma is the specific resistance of the conductor.

It should be noted that for a homogeneous section of the circuit, the resistance of the elements will be the same. If there are conductors with different resistance in the circuit, a situation arises when the maximum amount of heat is released on the one that has the greatest resistance, which can be concluded by analyzing the formula of the Joule-Lenz Law.

How to find the time? This refers to the period of current flow through the conductor, that is, when the circuit is closed.

Here, the letter "Po" denotes the resistivity, it is measured in Ohm * m / cm2, l and S are the length and cross-sectional area. In the calculations, square meters and centimeters are reduced and Ohms remain.

Resistivity is a tabular value and it is different for each metal. Copper is orders of magnitude smaller than that of high-resistance alloys such as tungsten or nichrome. For what it is applied we will consider below. 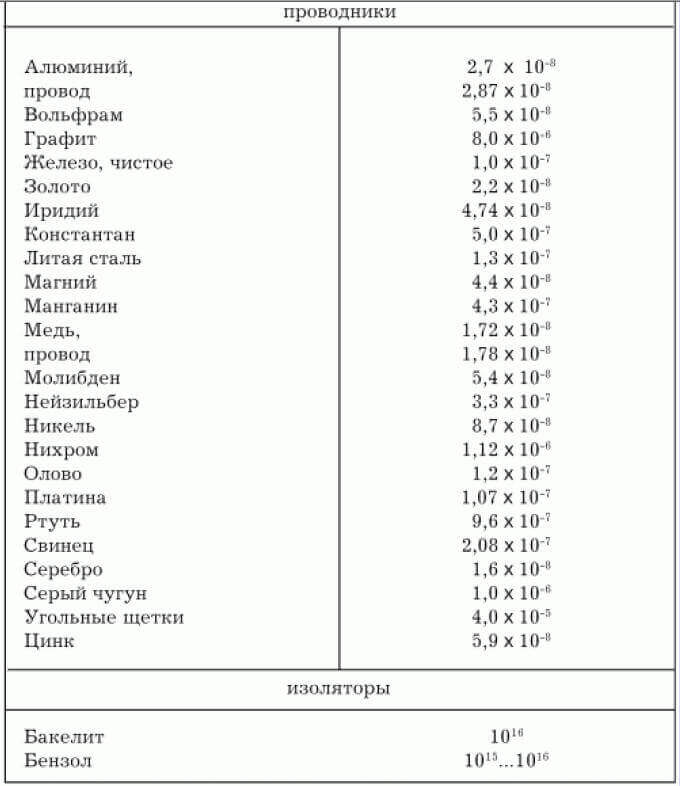 Let's move on to practice

The Joule-Lenz law is of great importance for electrical engineering calculations. First of all, you can apply it when calculating heating devices. A conductor is most often used as a heating element, but not a simple one (such as copper), but with a high resistance. Most often it is nichrome or cantal, fechral. 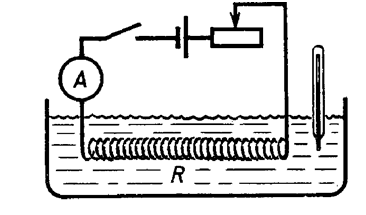 They have a large resistivity. You can use copper, but then you will spend a lot of cable (sarcasm, copper is not used for this purpose). To calculate the heat power for a heating device, you need to determine which body and in what volumes you need to heat, take into account the amount of heat required and how long it needs to be transferred to the body. After calculations and transformations, you will get the resistance and current strength in this circuit. Based on the data on the resistivity, select the material of the conductor, its cross section and length.

Joule-Lenz law for the transmission of electricity over a distance

At power transmission over distances a significant problem arises - losses on transmission lines (transmission lines). The Joule-Lenz law describes the amount of heat released by a conductor when current flows. Power lines feed entire enterprises and cities, and for this, a lot of power is needed, as a result, a large current. Since the amount of heat depends on the resistance of the conductor and the current, so that the cable does not heat up, you need to reduce the amount of heat. It is not always possible to increase the cross-section of wires, because this is costly in terms of the cost of copper itself and the weight of the cable, which entails an increase in the cost of the supporting structure. High voltage power lines are shown below. These are massive metal structures designed to raise the cable to a safe height above the ground, in order to avoid electric shock.

Therefore, it is necessary to reduce the current, in order to do this they increase the voltage. Between cities, power lines usually have a voltage of 220 or 110 kV, and at the consumer it drops to the desired value using transformer substations (KTP) or a number of KTP gradually lowering to more safe values ​​for transmission, for example 6 kV.

Thus, with the same power consumption at a voltage of 380/220 V, the current will decrease hundreds and thousands of times lower. And according to the Joule-Lenz law, the amount of heat in this case is determined by the power that is lost on the cable.

The Joule-Lenz law applies to fuses. These are the elements that protect the electrical or electronic device from excessive currents for it, which can occur as a result of a surge in supply voltage, short circuit on the circuit board or windings (in the case of motors) to protect against further destruction of the electrical system as a whole and fire. They consist of a housing, an insulator and thin wire. The wire is selected in such a section that the rated current flows through it, and when it is exceeded, the amount of heat generated burns it.

As a result of the above, we conclude that the Joule-Lenz Law has found wide application and is very important for electrical engineering. Thanks to the information on the amount of heat provided by the calculations using the formulas indicated above, we can learn about the operating modes of the devices, select the necessary materials and cross-section to increase the safety, reliability and durability of the device or circuit as a whole.

That is where we end our article. We hope the information provided was useful and interesting for you. Finally, we recommend watching a video on which this issue is discussed in more detail: