For the electrician and electronics engineer, one of the basic laws is Ohm's Law. Every day, the work poses new challenges for the specialist, and often you need to choose a replacement for a burnt resistor or group of elements. An electrician often has to change cables, in order to choose the right one needs to “estimate” the current in the load, so you have to use the simplest physical laws and relationships in everyday life. The value of Ohm's Law in electrical engineering is colossal, by the way, most of the diploma works in electrical engineering are calculated at 70-90% according to one formula.
Content:

The year of discovery is Ohm's Law - 1826 by the German scientist Georg Om. He empirically determined and described the law on the ratio of current strength, voltage and type of conductor. Later it turned out that the third component is nothing but resistance. Subsequently, this law was named in honor of the discoverer, but the law was not limited to it, and his physical name was called his physical size, as a tribute to his work.

The value in which resistance is measured is named after Georg Ohm. For example, resistors have two main characteristics: power in watts and resistance - a unit of measurement in Ohms, kilo-ohms, megaohms, etc.

Ohm's law for a chain section

Ohm's law for a section of a circuit can be used to describe an electric circuit that does not contain EMF. This is the simplest form of recording. It looks like this:

Where I is the current, measured in Amperes, U is the voltage in volts, R is the resistance in Ohms.

Attention!This formula is valid for direct current, for alternating current it has slight differences, we will return to this later.

In addition to the ratio of electrical quantities, this form tells us that the graph of the current versus voltage in the resistance is linear and the equation of function is satisfied:

An ideal conductor has no resistance, however, due to the structure of the molecules of the substance of which it consists, any conductive body has resistance. For example, this caused the transition from aluminum to copper wires in home electrical networks.The resistivity of copper (Ohm per 1 meter length) is less than that of aluminum. Accordingly, copper wires heat less, withstand large currents, which means you can use a wire of a smaller cross section.

Another example - the spirals of heating devices and resistors have a large resistivity, because are made of various high-resistance metals, such as nichrome, cantal, etc. When the charge carriers move through the conductor, they collide with particles in the crystal lattice, as a result of this, energy is released in the form of heat and the conductor is heated. The more current - the more collisions - the more heating.

To reduce heating, the conductor must either be shortened or its thickness increased (cross-sectional area). This information can be written as a formula:

Depending on the type of connection, a different pattern of current flow and voltage distribution is observed. For a section of a series circuit of elements, the voltage, current and resistance are found by the formula:

This means that the same current flows in a circuit from an arbitrary number of elements connected in series. In this case, the voltage applied to all elements (the sum of the voltage drops) is equal to the output voltage of the power source. Each element is separately applied with its own voltage value and depends on the current strength and specific resistance:

The resistance of the circuit for parallel connected elements is calculated by the formula:

Ohm's law for the complete chain

A complete circuit requires a power source. An ideal power source is a device that has one characteristic:

Such a power source is capable of delivering any power with constant output parameters. In a real power supply, there are also parameters such as power and internal resistance. In fact, the internal resistance is an imaginary resistor installed in series with the emf source.

Where ε is the EMF in Volts, R is the load resistance, r is the internal resistance of the power source.

In practice, the internal resistance is a fraction of Ohm, and for galvanic sources it increases significantly. You observed this when the two batteries (new and dead) have the same voltage, but one of them produces the required current and works properly, and the second does not work, because sags at the slightest load.

For a homogeneous part of the circuit, the above formulas are valid, for an inhomogeneous conductor it is necessary to break it into as short segments as possible so that changes in its dimensions are minimized within this segment. This is called Ohm's Law in differential form. 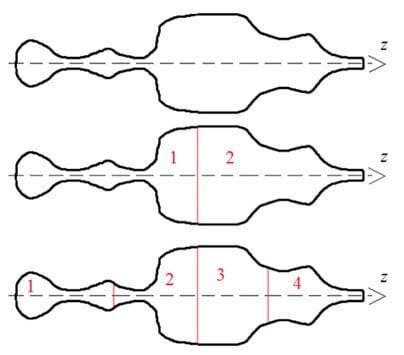 In other words: the current density is directly proportional to the strength and conductivity for an infinitely small portion of the conductor.

When calculating AC circuits, instead of the concept of resistance, the concept of "impedance" is introduced. The impedance is denoted by the letter Z, it includes the load resistance Ra and reactance X (or Rr)This is due to the shape of the sinusoidal current (and currents of any other forms) and the parameters of inductive elements, as well as switching laws:

Thus, the current begins to lag or be ahead of the voltage, and the total power is divided into active and reactive.

XL and XC Are reactive components of the load.

In this regard, the value cos Φ is introduced:

You may have noticed that the formula and its representation intersect with the Pythagorean theorem. This is indeed so, and the angle Ф depends on how large the reactive component of the load is - the larger it is, the greater it is. In practice, this leads to the fact that the current actually flowing in the network is greater than that which is taken into account by the household meter, while enterprises pay for full power.

Moreover, the resistance is presented in a complex form:

Here j is an imaginary unit, which is typical for the complex form of equations. Less commonly referred to as i, but in electrical engineering, the effective value of the alternating current is also indicated, therefore, in order not to get confused, it is better to use j.

The imaginary unit is √-1. It is logical that there is no such number when squaring, which can result in a negative result of “-1”.

How to remember Ohm's law

To remember Ohm's Law, you can memorize the wording in simple words like:

Or use the mnemonic pictures and rules. The first is a representation of Ohm's law in the form of a pyramid - briefly and clearly. 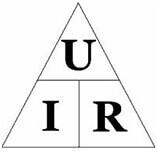 The mnemonic rule is a simplified view of a concept, for its simple and easy understanding and study. It can be either verbally or graphically. To find the right formula correctly, close the desired value with your finger and get the answer in the form of a work or a quotient. Here's how it works:

The second is a caricatured performance. Here it is shown: the more Ohm tries, the more difficult Ampere passes, and the more Volt - the easier Ampere passes. 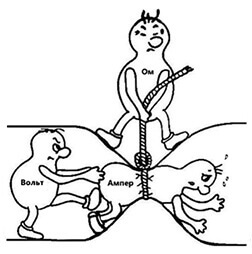 Finally, we recommend watching a useful video, which explains Ohm's Law and its application in simple words:

Ohm's law is one of the fundamental in electrical engineering, without his knowledge most of the calculations are impossible. And in everyday work often have to translate amperes to kilowatts or by resistance to determine the current. It is absolutely not necessary to understand its conclusion and the origin of all quantities - but the final formulas are required for development. In conclusion, I want to note that there is an old comic proverb among electricians:"Do not know Om - sit at home."And if in every joke there is a share of truth, then here this share of truth is 100%. Learn the theoretical foundations if you want to become a professional in practice, and other articles from our site will help you with this.