How to make grounding a water heater: an overview of ways

The boiler is installed in residential premises for the possibility of quick heating of water. It is a high power electric appliance. In order to minimize the risk of electric shock, it is necessary to connect grounding to the water heater. Unfortunately, most of the buildings in modern Russia were completed in the twentieth century, such an opportunity was not provided for them initially. It is understandable - then completely different methods were used to heat water, which had nothing to do with electricity. Living in such a building, its residents either ignore the need for grounding, or do it by a method that is far from defining the rules for operating electrical equipment. It is dangerous for the health, life, and also the safety of the apartment itself, and even the whole house. If there is no land in the old house, the article will explain why it is needed and what principles to follow in order to ground the boiler itself. So, below we tried to explain as detailed as possible how to make the grounding of the water heater in an apartment and a private house.
Content:

What is the danger of the lack of "land"

The boiler cannot avoid contact with moisture, and it is a good conductor. If insulation is not good enough, if there is a breakdown on the body of the heater, a person who touches it without personal protective equipment can pass an electric current through his body. A stroke can cause severe pain, nervous paralysis, memory loss, or even lead to death. In addition, there is a risk of fire.

Also, do not forget about the so-called stray currents. They tend to accumulate on the metal elements of powerful electrical appliances. Such currents must be removed, that is, ground the device, thereby avoiding the destruction of the parts themselves and the outer case. This phenomenon is also felt by a person and is familiar, as a rule, by the short-term effect of current on the skin.

Grounding, or rather its "tripod", which begins wiring in the living room, can make devices protected from lightning in a thunderstorm. Thus, the entire charge will go to the ground, leaving electrical appliances, including a water heater, intact.

Grounding methods for the boiler

The most primitive way to ground the boiler in the room is to wire the housing to any metal part whose construction goes underground. Suitable for this purpose, for example, a central heating battery. In modern realities, plastic pipes are becoming more and more popular with residents, in this case it is necessary to check the riser, perhaps it is all-metal. In addition, it is important to know what to ground electrical appliances on the pipeline and other metal structures strictly forbidden, therefore, we strongly recommend avoiding this method of organizing protection (shown in the photo below)! 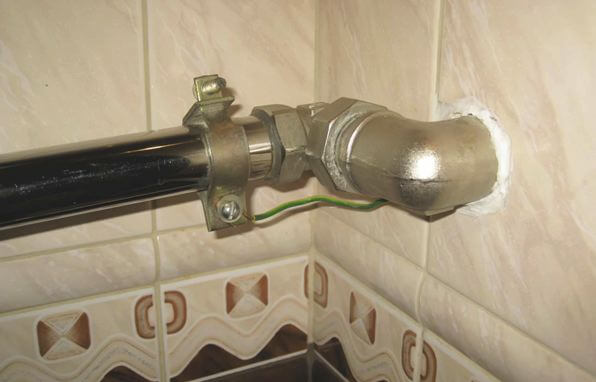 Terminals for attaching a ground contact are present on most modern wiring devices. This applies, for example, to sockets with “antennae”, which are precisely the conductor for the “earth”. To make literate water heater connection necessary:

If the wiring is two-wire, such as in Khrushchev, you can run the third core through the cable channel, thereby avoiding the need for gating. This will avoid dirt and bulky work, but it will not look too right. However, this is one of the most commonly sold options when the cable is two-core.

Another effective way to ground the boiler is to connect it to the water heater line residual current device or differential automaton with a rating of 10 or 30 mA (leakage current). In this case, even if there is no grounding in the apartment, if a dangerous situation arises, an electric shock can be avoided, since the RCD will work and the entire line will be disconnected from the network. About, how to connect an RCD in the apartment We talked in a separate article. About connecting the difavtomat we also spoke separately. 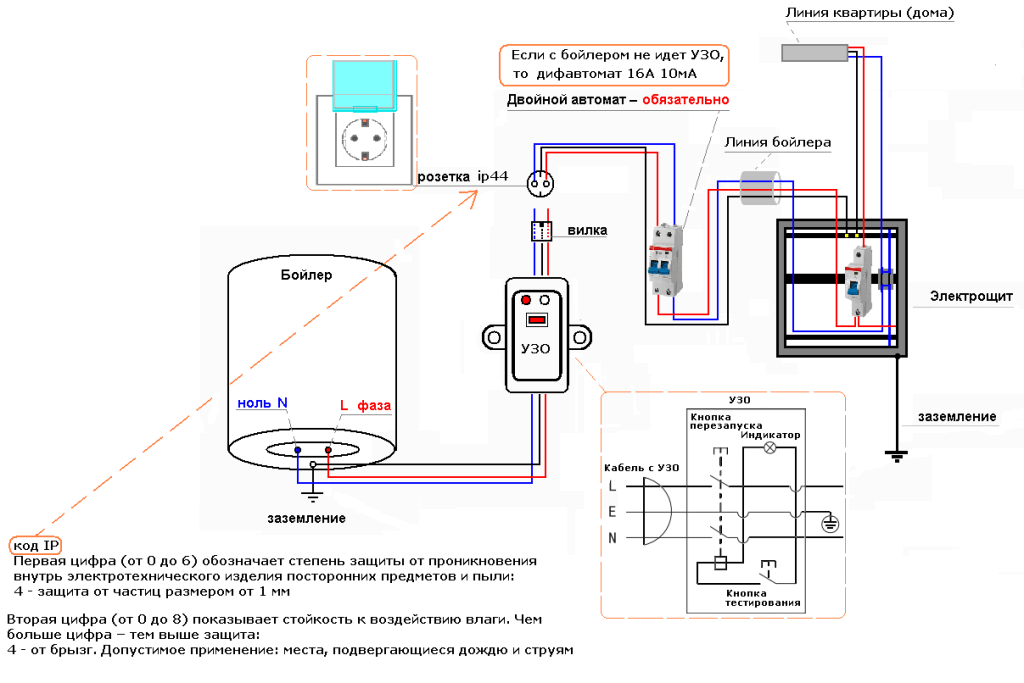 There are times when residents use the water heater in the bathroom only when it is turned off. That is, at first the water heats up, then the boiler turns off, and only after that the heated liquid is already used. The method has a right to exist, but it is extremely inconvenient - the water cools, it may not be enough for the entire washing process, and there is a risk of forgetting to turn off the heater on time. Grounding will solve all these problems.

As advice - you need to buy water heaters of the highest quality. They have good insulation of the tubular electric heater, which will reduce the possibility of breakdown. About, how to choose a storage water heater for the home, we told in a separate article.

The process of connecting the grounding contact for the boiler in the country or in a private house is completely similar to that described for apartments. The only exception is that the structure itself, which can be grounded, must be erected independently and strictly guided by the rules for installing electrical equipment. About, how to make grounding in a private house, we told in a separate article.

In conclusion, I would like to note that the need for a proper ground connection for the boiler, like any other powerful electrical appliance, is due primarily to safety. It is the grounding contact of the water heater that will save residents from the potential for tragedy, as well as ensure safety from the point of view of eliminating the risk of fire. Do not play with fate, it is easier to ground the boiler and make your life calmer. We hope that our step-by-step instructions for grounding a water heater in an apartment and a private house were useful for you and helped to independently install the grounding loop!