What is a potential equalization system and why is it needed

When we considered due to which the electric shock in the bathroom, then one of the important points in solving the problem was the creation of a special system that will equalize the electric potentials of metal objects. Most often, this option provides protection against electric shock in apartments, but it does not always work, especially in older apartment buildings. Next, we will clearly describe what a potential equalization system (SOE) is, what it is and what is equally important - how to make a protective circuit with your own hands.
Content:

First, let's talk about why you need a soup in the apartment. The fact is that all metal objects are current conductors, which is known from the school course of physics. In apartments, such objects are cold and hot water pipes, a heated towel rail, a drain, a heating system, electrical appliance cases, and even ventilation ducts. As you know, metal pipes and other communal utilities are interconnected. If a difference in electrical potentials is formed between two metal objects, for example, a shower cabin and a heating battery, then a person touching two objects at the same time can be extremely dangerous. This is due to the fact that the body will act as a jumper between communications, and the current will flow through a person from an object with great potential to that which is less.

A typical case of this danger is the appearance of different potentials on the water and sewer pipes. If current leak will occur on water pipes, when you bathe in the bathroom, the likelihood of electric shock will be extremely high. The reason for this is the discharge of water and the simultaneous touch of the tap. Water in this case will become a conductor from the sewage system to water pipes, and you will become this jumper. You can clearly see the dangerous situation in the picture below: 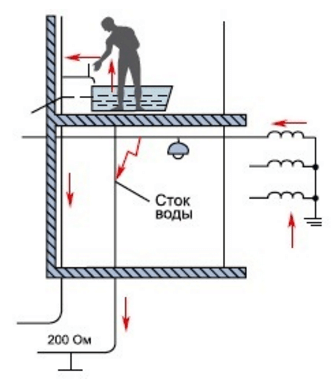 To avoid such a problem, we just need a potential equalization system in the apartment.

There is a basic system of equalization of potentials (OSUP) and additional (DSUP).

According to Chapter 1.7 of the EMP (p.1.7.82), the main potential equalization system in electrical installations up to 1 kV should connect the following conductive parts (see the figure below):

When all these elements were combined, one could not be afraid of the danger of the emergence of different potentials in the past years, but today the situation is different.This is due to the fact that recently, apartment owners have switched from metal heating pipes to plastic, or rather polypropylene. As a result, the plastic breaks the protective chain and a potential difference can occur between various communications in the bathroom, for example, plumbing and heated towel rails. 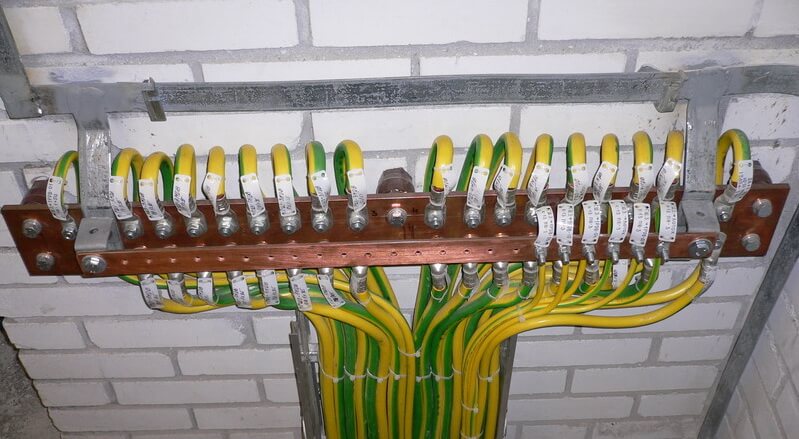 Another problem of using only OSUP - over a large length of communications (multi-storey buildings), the electric potential of the same pipe on the first and tenth floors will differ significantly, which is also a dangerous situation. That is why, together with the main EMS, they create an additional, individually for each apartment.

An additional potential equalization system is located in the bathroom and combines the following elements:

Each system object must be connected by a separate single-core copper wire, the other end of which is displayed in the potential equalization box (PLC), as shown in the photo below: 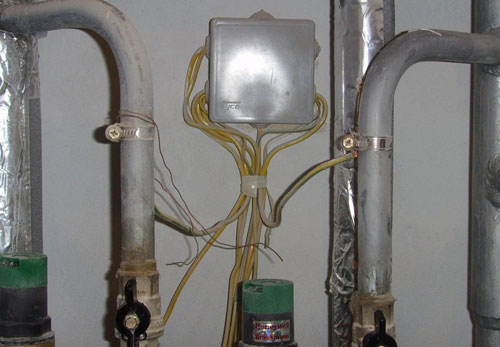 Immediately draw your attention to several requirements that apply to an additional potential equalization system in accordance with the rules and regulations PUE:

So we examined what the main and additional potential equalization system consists of. If you do not have a local protective circuit in your apartment, then we will tell you how to make a self-propelled control system yourself.

We carry out installation

Installation of additional EMS (it is also called local) is easy to perform. It is advisable to do such work at the stage of overhaul, as the wire from the box (PMC) to the shield must be kept in the floor screed. So, first you need to prepare the following materials: 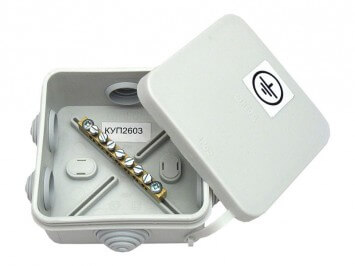 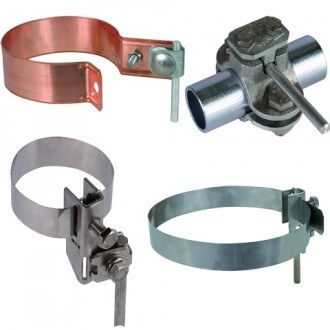 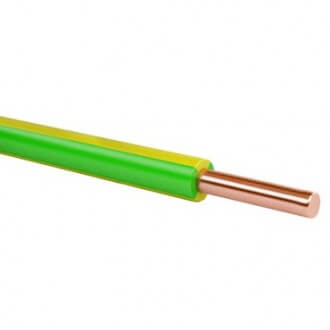 Having prepared such a small set of DSUP, you can proceed to installation. First of all, it is recommended to draw up a potential equalization scheme, according to which you will connect all the elements. Also on the diagram you can sketch in what places the wire will pass from the terminal box to the grounding bus in the shield. You can see examples of projects for an apartment on the plans below: 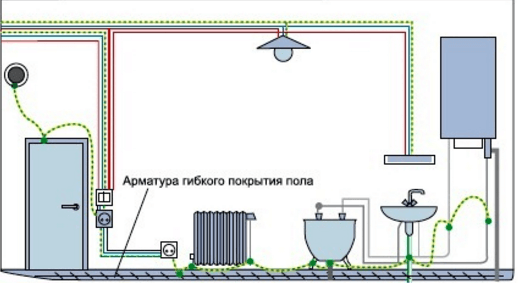 After that, you need to prepare the communications for the connection - to clean a small area under the pipe clamp to a metallic sheen. This is necessary so that the contact is reliable, and the potential equalization system works in a dangerous situation.

Next, you need to connect each element with a separate wire. If in areas there is no probability of mechanical damage to the wire, you can use a 2.5 mm conductor for equalization2. When the probability of damage is, albeit insignificant, it is better to play it safe and use a wire with a cross section of 4 squares. All wires are inserted in the PMC and securely fixed to the bus. By the way, it is recommended to choose the terminal box for installation in the bathroom with IP degree of protection 54 or higher. 6 mm wire is drawn from the bus2to be laid to the housing shield.There is also a specific requirement here - this conductor should not cross other cable lines, for example, if you decide conduct electrical wiring in the floor.

At the end, the wire is connected to the grounding bus in the shield, on which the installation of the additional potential equalization system is completed. We recommend you to play it safe and call an electrician so that he checks the system’s performance with a tester and a visual inspection!

That was all I wanted to tell you about how to make a DCM in the bathroom with your own hands. We hope the information and diagrams were clear.