How to make a wiring diagram before repair

All work on installing new and replacing old wiring no matter where they will be done, in an apartment or a private house, in a summer cottage or in a garage, needs a competent and thoughtful approach. It is necessary to begin this complex process with the preparation of a power supply project, on the basis of a thorough elaboration of a plan for arranging all the electrics of housing. The project can be made the old fashioned way on paper using colored markers or made on a computer using a simple graphical program. In this article, we will step-by-step look at how to draw up a wiring diagram in an apartment and a private house.
Content:

Determine the location of furniture and appliances

Before drawing up the scheme, it will be important to take into account the layout of the premises, the planned arrangement of furniture and the placement of stationary electrical appliances. The installation locations of the electrical accessories in the room should be chosen so that they are not cluttered with sofas or cabinets and provide comfortable access to turning on and off the lighting and electricity consumers. It would be better if the discussion of this difficult issue is submitted to the family council.

The first step is to make a floor plan with an indication of window and door openings. In order to make it easier to calculate the required amount of cable and wire in the future, it is better to draw up a plan on a scale in compliance with the dimensions. The process of designing a wiring diagram will be considered as an example of a one-room apartment. The name of the premises on the plan is better to number and indicate the decryption separately. 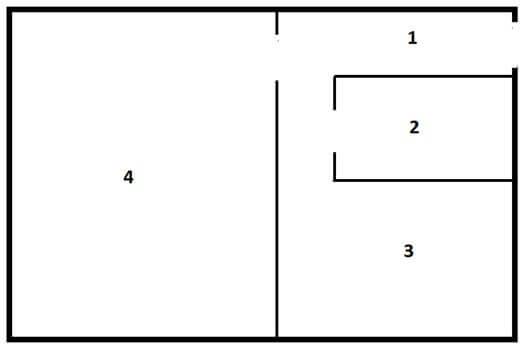 After that, it is necessary to put places on the scheme where it is planned to place furniture and stationary electrical appliances. If household appliances are highlighted in red, this will greatly simplify the work of further drawing up the wiring diagram. It is recommended to number and fix all electrical items in the decoding: 1 - washing machine, 2 - dishwasher, 3 - electric stove, 4 - acoustic center, 5 - television, 6 - music center, 7 - personal computer. 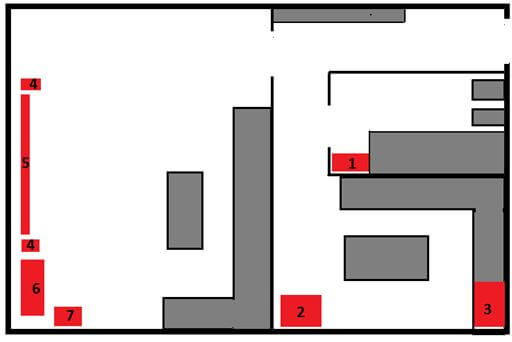 Drawing up a plan of the arrangement of furniture and equipment will allow you to determine the points of optimal installation of outlets. Layout of sockets in the apartment: 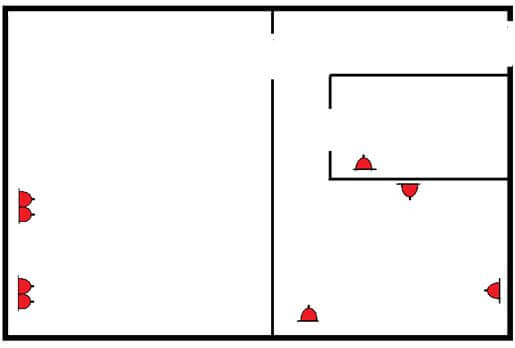 Read more about what to look for and how to place sockets in the kitchen and in the bathroom:

To design the wiring diagram, we recommend the use of special programs. The bestelectrical circuit software we provided in a separate article!

In the classic version, ceiling lights should be located in the center of the room, the location of which is at the intersection of lines passing through the middle of the length and width of the room. In the hallway, made in the form of the letter G, 2 lamps are installed.

When drawing on the layout of the switches, it must be taken into account that the door can open inward or outward, be either right or left. An open door should not interfere with free access to it. Switches are usually located inside rooms. Exceptions are rooms with high moisture content, which include laundries, baths, and bathrooms. This is done in order to ensure electrical safety and the safety of switching equipment. 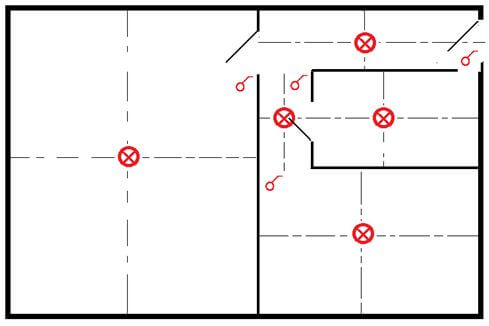 The presented wiring plan shows that the bathroom lighting switch is located outside.

Routes for laying cables and wires

After determining the installation location of lamps, switches and sockets, it is necessary to draw up a diagram of the wiring routes, this design phase is the main part of the work. The wiring diagram and installation is greatly simplified if suspended ceilings are equipped in your home or apartment. In this case, the wires are laid in corrugated pipes and attached to the draft ceiling.

In order to save wire, wiring routes are selected by the shortest distance. A wire connecting the junction boxes with switches and sockets is laid in the gates under the plaster. With the standard version of the arrangement of ceilings, the electrical wiring is laid in pre-punched strobes along the walls of the room. To connect lighting devices, the wire is passed through the channels of the ceiling. An example of laying a cable line, in accordance with existing standards, is provided in the diagram: 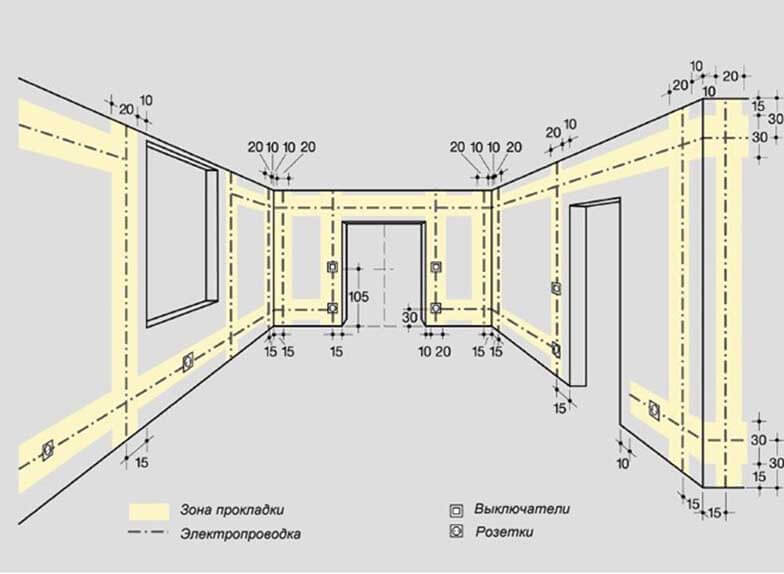 Planning a wiring route must begin from the farthest point of the electrical network. In this case, it will be a double outlet in the hall, it must be connected to the junction box, which is advisable to install at the entrance to the room. Then, the route of the wire connecting the second outlet is applied to the circuit. 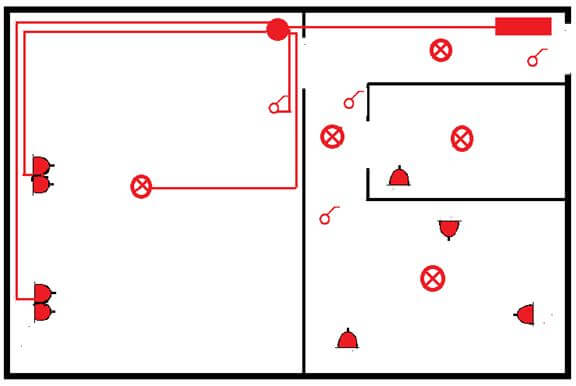 The lighting network will consist of wires, the first of which goes from the box to the switch, the second, connected to the ceiling light, is laid in the channel of the floor slab. The junction box in the hall receives power via two wires from the junction box installed in the hallway. It is also necessary to provide grounding in the apartment, if possible. In this case, the wiring will be three-wire.

According to this principle, it is necessary to draw up a wiring diagram in the remaining rooms. To complete the picture, we can assume that the kitchen has a suspended ceiling. In this case, the wiring will be laid in the corrugated pipes, the dowel is fixed with nails to the concrete slab, the routes of its laying will be selected taking into account the shortest distance. Descent to the electrical fittings will be done under the plaster. 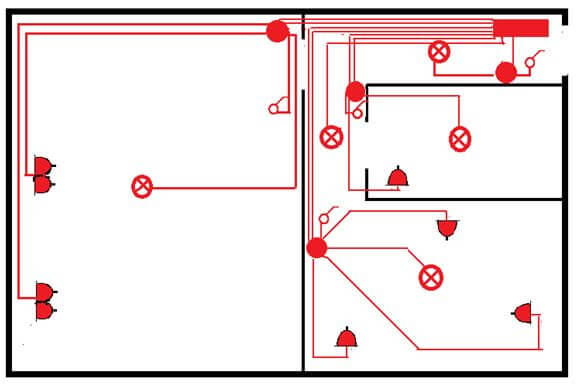 Do not forget that the premises are supplied with electricity by at least two groups of wires, one of which provides power to the power network, the other is intended for the lighting network. More about how to divide wiring into groups, we told in a separate article.

You can save a lot if you connect the sockets with honey by a "loop", bypassing the power distribution boxes. Experienced electricians do not recommend practicing this method of connection, due to the occurrence of a large current load on outlets. In addition, when using this method of connection, the failure of one outlet can cause blackout of the entire power network.

In conclusion, on the basis of a finished and correctly drawn up scheme, the necessary meter of wiring and section of wires, the required number of sockets, switches and junction boxes are calculated.The cross section of the conductors is selected from the calculation of the estimated current load of consumers. About, how to calculate cable cross-sections, we told in a separate article.

We also recommend that you watch the video, which clearly illustrates the stages of drawing up the wiring diagram, as well as examples of finished projects:

Now you know how to draw up a wiring diagram in an apartment and a private house. As you can see, in order to independently draw up a plan for wiring the cable and installing electrical accessories, you need to study all the nuances, which are quite a lot!

We recommend also to study: