Anyone who knows the cost of repairing home electrical appliances, especially modern TVs and other sophisticated equipment, has already installed a stabilizer or voltage relay to the power supply panel (if voltage interruptions are accidental and short-term). Others, especially not aware of the price of the case, calmly use expensive equipment with the risk of large losses ("at random"). The most critical in this regard is the situation in suburban (rural) power grids, where, in addition to thunderstorms, there are “phase imbalances” of the common supply transformer, in which the voltage on the lightly loaded phase can increase to 260–270 volts or more.

What does the market offer?

In the modern market there is an abundance of stabilizers and voltage relays (in the form of an adapter “plug-socket” or for an electrical panel for the entire apartment). Modern leading companies produce protective devices (mainly panel models), - look on the Internet, which do not allow, however, to reliably protect electronic household equipment, have certain functional disadvantages (see below). These products are widely manufactured and brightly advertised, I think, simply based on a technically illiterate consumer. Judging by a review of market offers (over several years), most Manufacturers have stopped developing their products on engineering and structural solutions that have been verified over the years, which are economically advantageous and are outwardly attractive to the general consumer. However, if you look at the problem of protection against surge from an engineering point of view, it can be said that a high-quality “socket” (protection device) should simply supply high-quality voltage, and this does not depend on its beautiful “face”, but on its “functional mind”.

First of all, we note that all simple heating devices are not afraid of large deviations of voltage from the norm (the deviation can be up to +/- 40 Volts). Therefore, it is impractical to include them after the stabilizer, unnecessarily loading it. The stabilizer is needed mainly for the refrigerator, if the voltage is continuously reduced to 180-190 volts.

In all cases, resolving stabilization issues or other protection should be borne in mind that:

Thus, the situation regarding the solution of surge protection problems is not seen as satisfactory as on store shelves and on sites of leading manufacturers.

My own experience in developing the most economical and promising, in my opinion, protection devices has led to the following solution (which has been successfully tested in experimental models, patentable, or constitutes the subject of know-how - under the relevant agreement with the interested Manufacturer). 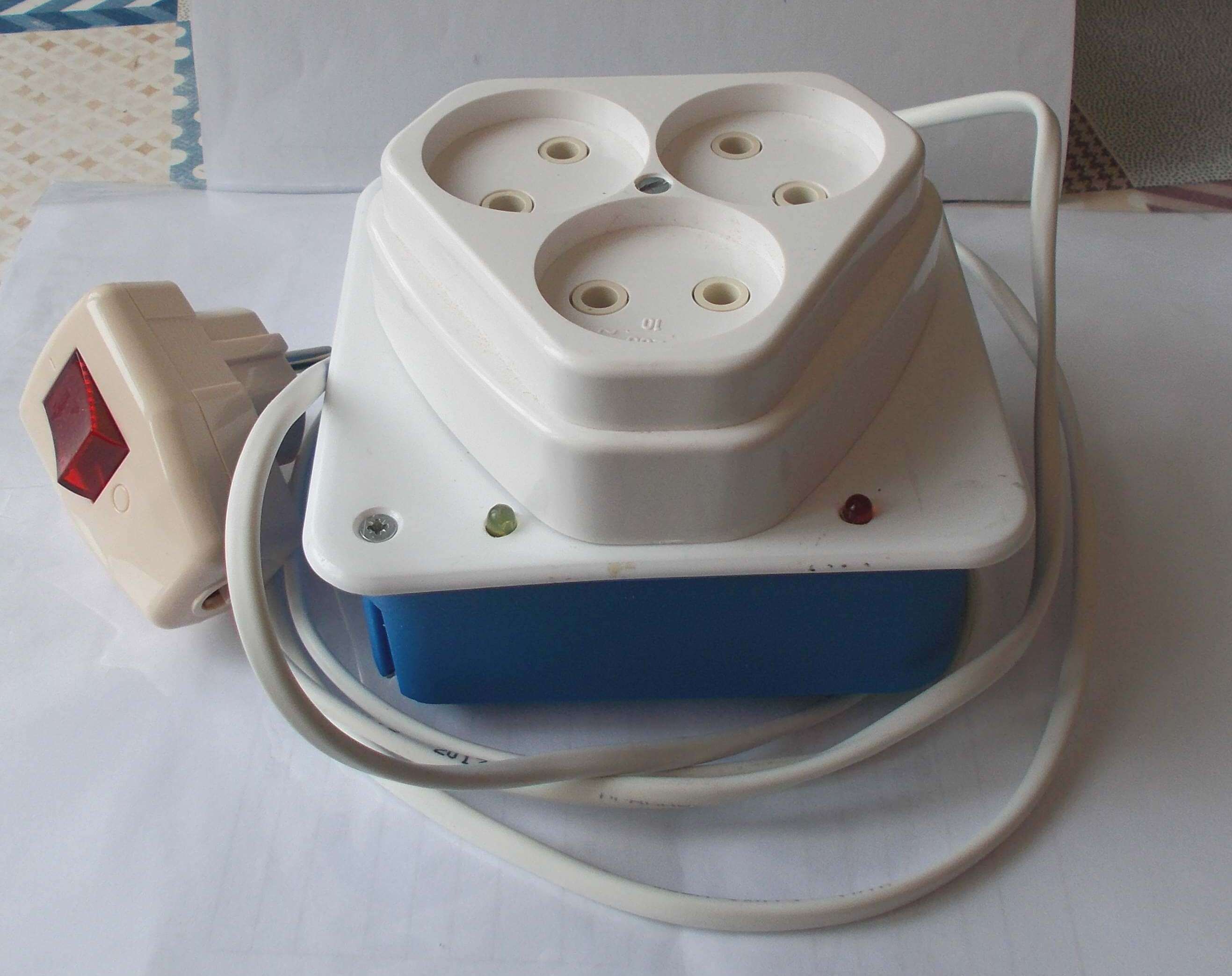 To eliminate the disadvantages of stabilizers and voltage relays, it is advisable to implement a cut of excessive voltage amplitude in the range of 250-290 volts of the input voltage (the most likely excess) and instantaneous cut-off at a higher voltage. This is possible by introducing active ballast into the power circuit with a powerful Darlington transistor (or two simple ones). To increase the allowable power of consumers, it is possible to install a miniature fan (12 V) with a simple power supply for chargers.In this case, the 12/5 Volt transition is very simple - by switching an additional zener diode in the charger circuit. That is, the protection device acquires the additional function of a charger.

The implementation of ballast control according to the principle noted above (synchronous amplitude slice, including all pulses) does not require the use of any controllers. Moreover, in a recent new work on the circuit, it was possible to get rid of the relay for switching on the amplitude stabilization mode and, accordingly, the electrolytic capacitor (there are none at all), thanks to the development of the original DC key on the thyristor (with hysteresis), which turned out to be very successful in the circuit used protection devices (judging by the experience of the author and the search for analogues, it can be considered as an invention).

In standby mode, the control board consumes less than 0.5 W (depending on voltage). For instant cutoff (about 1 ms), the author has also developed and successfully tested (over several years, in different devices) the design of a relay trip based on a thermal breaker of the VK-1-10 type, which is widely used in network filter-splitters. However, due to the synchronous cut-off of the amplitude at the level of 250 V, up to 280–290 V of the mains voltage, the probability of a greater overvoltage is significantly reduced, so it becomes rational to use a simple fuse, which is simply burned out by a powerful thyristor (with some current limitation) for a sufficiently long for this overvoltage pulse (taking into account the duration of the decay of the half-wave of the mains voltage). It should also be taken into account that the current through the fuse (of the order of 20–40 A) “feeds” the mains voltage (due to its resistance).

Variants of the implementation of the synchronous amplitude limitation scheme

Below are photos of the control board (the latest development, an option for testing), as well as a video of testing the device with instant cutoff (previous development, to listen to the cutoff click, you need to increase the volume) and the test video of the “DC key” (the first test of the idea, voltage 24 V). The latter, of course, requires certain explanations, but since this device is planned to be transferred to interested Manufacturers as “know-how” (under the contract), it is possible to present here only a high-quality (experimental) I – V characteristic of the first low-power switch (the switch has already been tested for voltage up to 400 V, with hysteresis of about 10%). 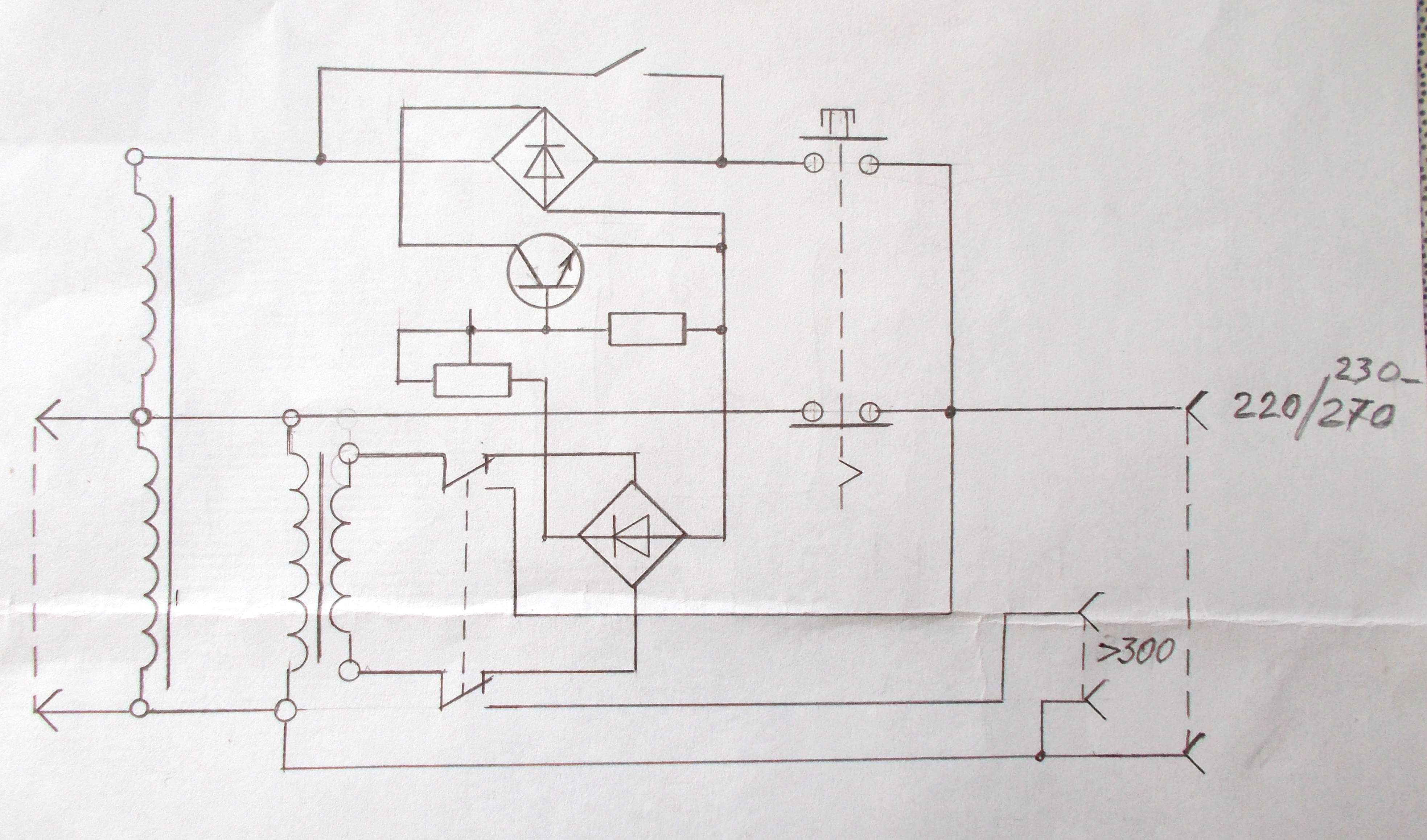 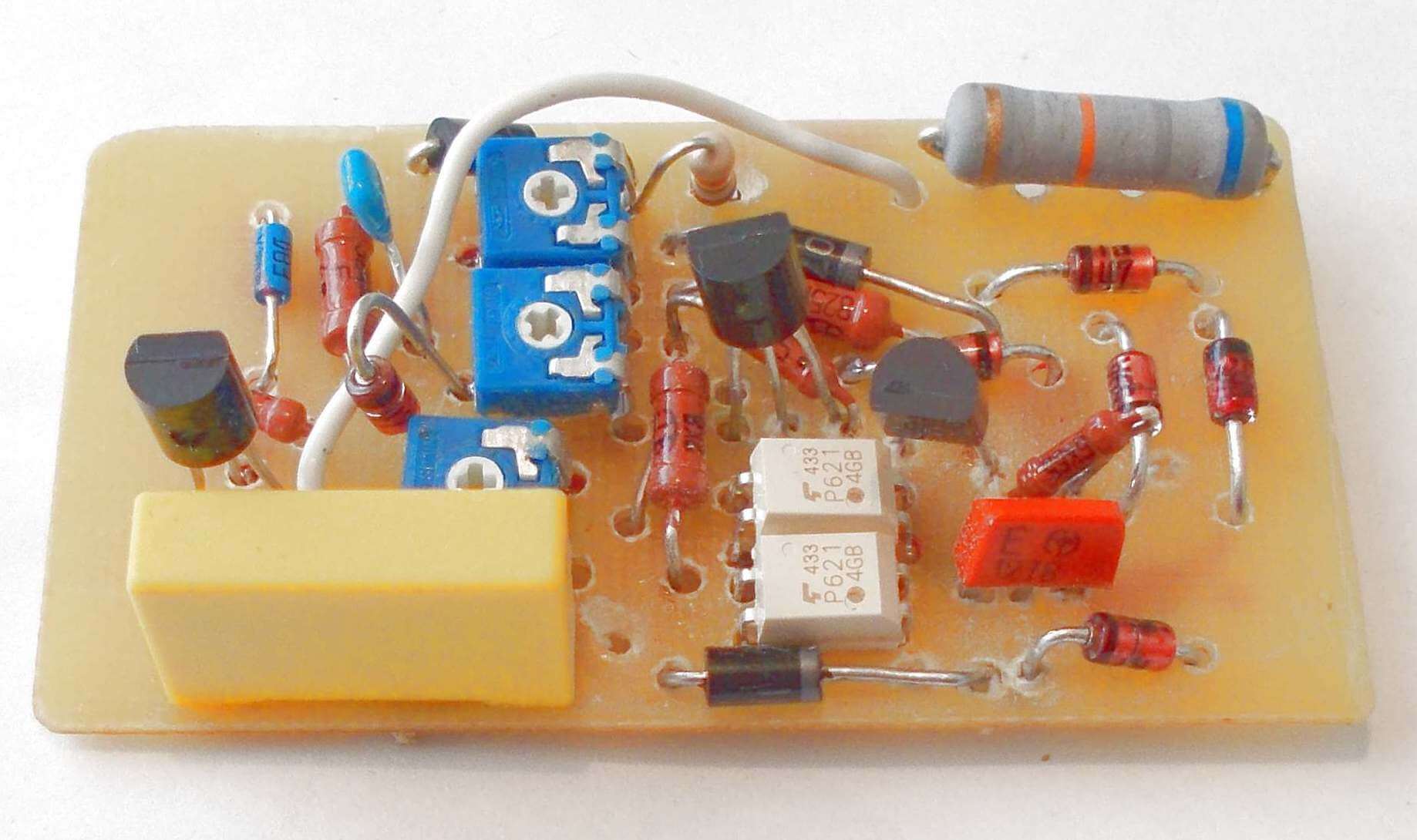 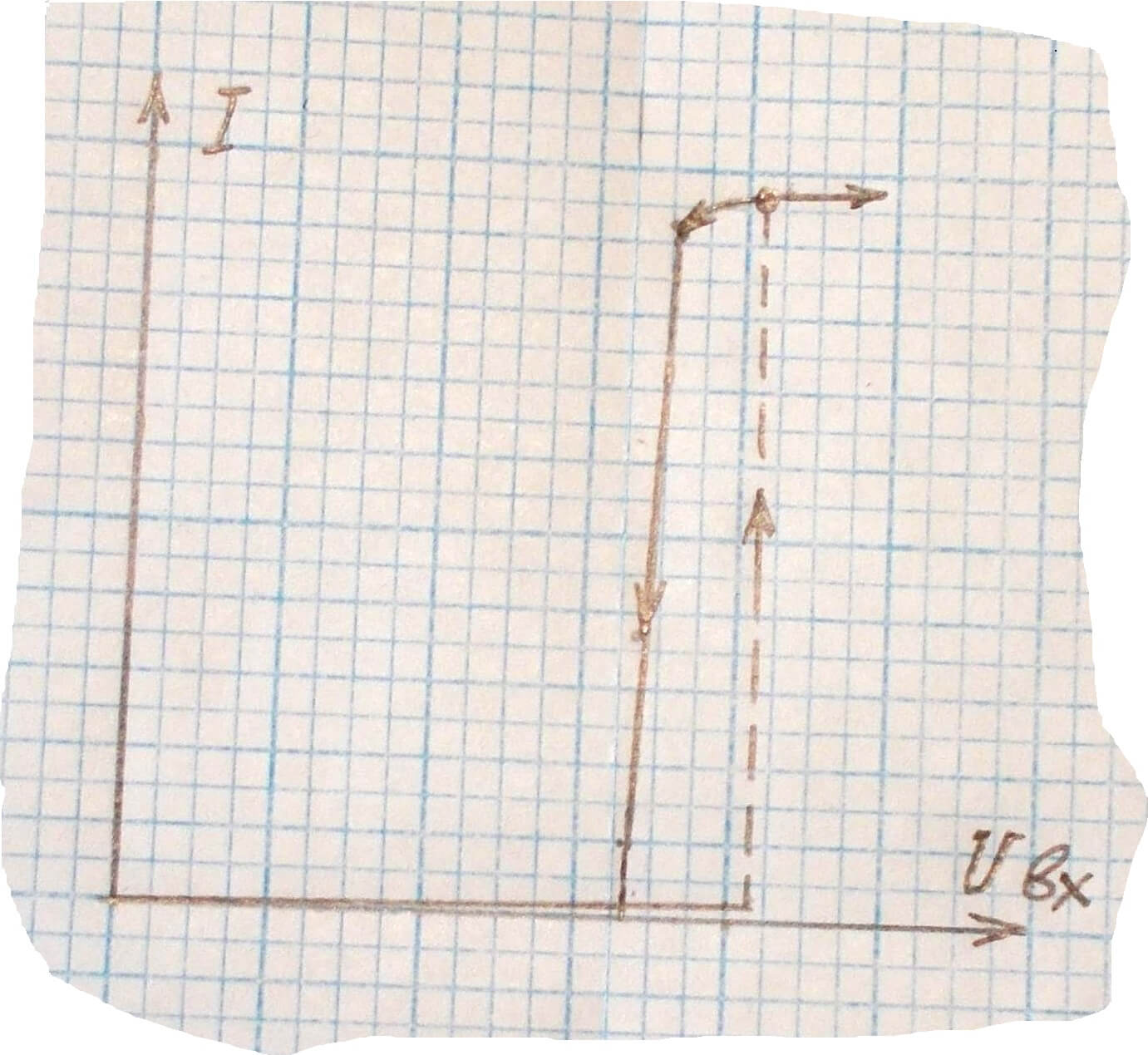 I would also like to talk about a source of increased voltage for setting up and testing a protective device. Instead of the well-known LATR, which has a “rough” step characteristic and insufficiently high voltage, it is advisable to use a special device based on two conventional transformers with a secondary winding of 30–40 Volts. Below is a diagram used by the author (some changes are possible).

The power of the main transformer can be 50-100 W, and an additional 15-30. At the same time, protective devices are tested for light load, up to 10-15 W (for example, a resistor with a neon indicator, or an incandescent lamp for a refrigerator). To test the ballast for a powerful load, it is possible to power the ballast directly from the outlet, and the control board through the aforementioned voltage increase device (ballast tests for a powerful load are, in fact, thermal tests).

Those who wish to join in the development of industrial designs of a new protection device for electronic equipment (exhibition models) can contact the administrator with suggestions.