What is overvoltage in the mains and what is it dangerous?

Overvoltage is a pulse, spasmodic or oscillatory excess of voltage in the power supply line relative to the tolerance for state power supply quality in accordance with GOST (GOST 32144-2013: Standards for the quality of electrical energy in general power supply systems). Let us give an example: a single-phase home network must have a nominal voltage of 230 V with an allowable deviation of +/- 10% (it should be borne in mind that, according to the previous GOST, the rating was 220 V and many equipment is still designed specifically for this voltage). This is the current voltage. If it is converted to amplitude, it will turn out 322 V. When a pulse overvoltage occurs, it is in the worst case added to the amplitude value of the voltage half-wave (50/60 Hz). This phenomenon usually lasts for a short time - a few milliseconds (with a half-wave duration of 10 ms), but in such a short period of time quite serious and flawed phenomena can occur. In this article we will consider the causes of surge in the network, as well as their types and protection measures.
Content:

What is dangerous phenomenon

Overvoltage in the mains is as follows: 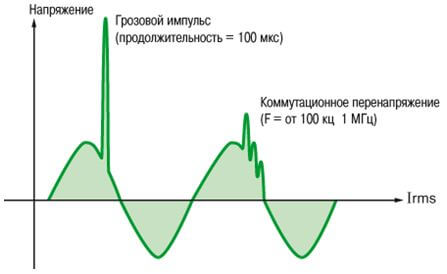 However, in the household electrical household, this is not the main thing (insulation cannot be replaced), but insulation failures caused by mechanical causes (including as a result of fastening of electrical wiring with squeezing and twisting), climatic (damp, water ingress) and purely economic (accumulation of dust, dirt , insects, etc.). So, overvoltages are also superimposed on all these violations.

All this leads, as sad cases show, to failure of electrical wiring and electrical appliances, to tragic fires. If the electrical protection is also broken in the house (faulty or roughened with frequent tripping), then the probability of fire as a result wiring overload or short circuit increases dramatically. If a damaged appliance can simply be disconnected from the outlet and replaced with a working one, then the wiring cannot be replaced quickly. The photo shows the damage to the insulation in the outlet, which often occurs due to loose contact and overheating, or as a result of a thunderstorm, which can lead to overloading the wiring and short circuit. 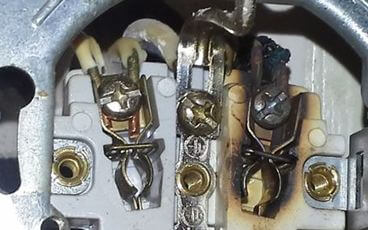 Thus, overvoltages in the home electrical network are especially dangerous for old electrical wiring, which are not subjected to routine inspection (together with outlets) and are not updated, where they are carelessly handling outlets, allowing them to overheat.Particularly dangerous in this regard should be considered the old wiring in houses, often exposed to thunderstorms and the invasion of insects (village and township).

As a result of overvoltages, very expensive electronic equipment, especially television and computer, which, as a rule, has no protection against this, can instantly fail. Look at the label near the power cord, most often even 250 V is indicated, while the current GOST allows 253 V. Therefore, the modern market is saturated to the limit with all kinds of stabilizers and various surge protection devices, they are being improved (it will be useful to read the article : https://my.electricianexp.com/en/kak-predotvratit-poteri-ot-perenapryazhenij-v-domashnej-elektroseti-obzor-novoj-razrabotki.html).

First of all, it should be noted that the overvoltage is divided into four types:

Briefly consider the causes of each type of dangerous situation.

This species belongs to natural phenomena and is considered the most dangerous, as it is caused by particularly powerful lightning discharges. With such discharges, the pulse overvoltage can reach (depending on the location of the lightning branch) several tens of thousands of volts per micro-fraction of a second.

Lightning can get directly into the power supply network (overhead line) or into the lightning conductor (air terminal). Overvoltage can also occur as a result of lightning striking away from the mains (as a result of electromagnetic interference). 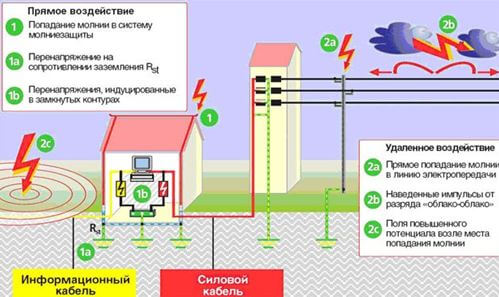 Impulses can be of various shapes and durations. For example, the figure below shows two typical types of waves - 10/350 and 8/20. 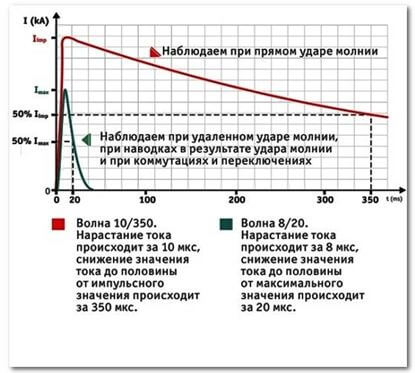 It should be noted that in the presence of a lightning rod that protects the object from a complete discharge, most of the pulse current is diverted to the ground, and the rest is distributed in some random way in home wiring.

This phenomenon occurs when a common local area network dramatically changes its stationary mode of operation. This can occur as a result of a sharp turn on or off of powerful equipment, as well as during emergency overloads. There is a so-called transition process, which is oscillatory in nature with a high (up to hundreds of kilohertz) frequency. In this case, overvoltages can be very high. They are determined by the currently specific network characteristics and parameters, phase load distribution. 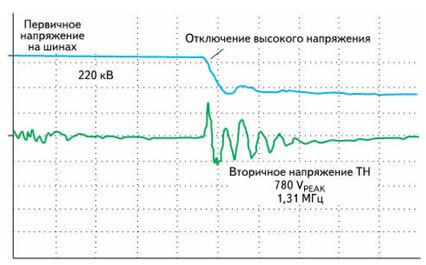 For example, when you turn off a powerful transformer, all the energy that is currently in it in the form of magnetic saturation, can lead to severe overvoltage in the network and cause instant damage to electrical equipment.

A similar phenomenon occurs as a result of breaks and damage in networks. For example, due to a break in the common neutral conductor for consumers in a three-phase network, the so-called "zero break", The stresses in the phases are distributed substantially depending on the phase load ("phase imbalance"). This is typical for transformers not equipped with appropriate compensators.

This phenomenon occurs in dry air, in materials that preserve well electric charge. A discharge between materials and electrical wiring can occur completely unexpectedly, instantly causing overvoltage and damage to equipment connected to the network. Electrostatic potentials are invisible and not felt by humans, only discharge is well felt (many have experienced this).

For example, if you wear dielectric shoes, then when walking on a carpet a person is charged up to several thousand volts. And if after that you touch any structure that has conductive properties (for example, a battery or a computer case), an electric discharge will occur that lasts several nanoseconds.Such electrostatic effects are considered very dangerous for electronic parts in any electrical equipment. In the manufacture of electronic equipment, it is strictly required to wear grounding bracelets and use many other protective equipment.

About, how to protect yourself from static electricity, we told in the corresponding article on the site!

The electrical network must always be reliable, comply with the above GOST on the quality of power supply and have protective devices against possible overvoltages (especially in areas of high lightning hazard). It is impossible to completely avoid pulse overvoltages, but their value can be reduced to a relatively safe level (modern equipment is manufactured with a certain margin of voltage).

To protect the power supply and appliances at home, you must:

More about surge protection devices We told in the corresponding article, which we strongly recommend that you read!

Important! You do not know who compensates for the damage when electrical appliances nevertheless burned out? The power supply company is fully responsible for the quality of the voltage in the network. Therefore, in the first place, you should contact it there and write a statement indicating the losses caused. However, before this, you should get documents proving the causes of damage (acts with witnesses, photos with the date of shooting, control measurements of increased or reduced voltages by calling a competent electrician with a special device). It is necessary to refer to the above GOSTs.

So we examined what overvoltage in the network is, what are the causes of its occurrence and how to protect ourselves from this phenomenon at home. We hope you find the information provided useful!