In order for the wiring to be safe, convenient to maintain and, moreover, able to withstand the load from all electrical appliances of the housing, it is necessary to correctly approach the drawing up of a switchboard layout. On this project, the entire hierarchy of circuit breakers and RCDs, up to the outlet group, should be indicated. In addition, the rating must be indicated on all protective automation. Next we will provide readers site ElecroExpert visual diagrams of a switchboard in a private house, apartment and cottage.

So, if the apartment is old-built and, in addition, one-room (for example, Khrushchev), then the wiring plan for the wiring will look like this: 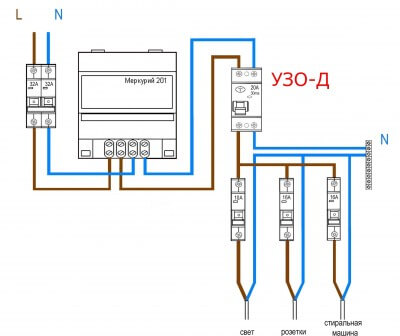 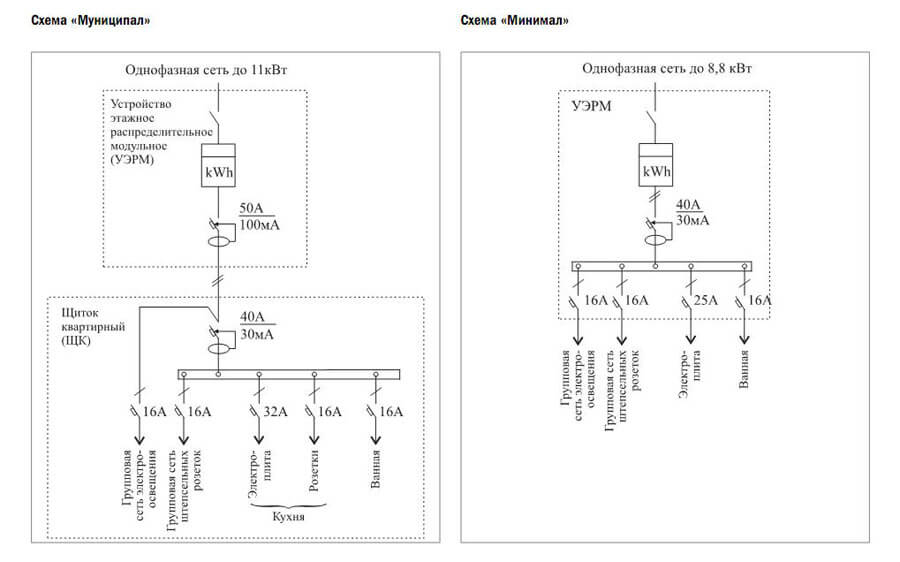 As you can see, in this connection scheme the switchboard does not have a PE bus, because in the old Khrushchev, there is no grounding. As for the elements of the electrical circuit, it consists of a two-pole circuit breaker, an electricity meter (Mercury 201), RCD and group machines. One machine serves the lighting group, the second - sockets, and the third - the washing machine. If you have a ground loop, then the electrical circuit of the switchboard assembly in the apartment will look like the one shown in the example below.

Important! The installation of RCDs in a two-wire power supply network is prohibited according to the PUE p. 1.7.80 (see Chapter 1.7) and a number of other regulatory documents, so this issue raises a lot of controversy. Each specialist has his own opinion on this matter. On the one hand, the combined protective and working conductor cannot be torn, on the other hand, without an RCD, there will be no chance of survival at all if you fit in the “phase” “well”. The installation of RCDs in a two-wire power grid is permissible as a temporary measure with a future transition to a full-fledged network with a grounding protective conductor (PE), type - TN-C-S, TN-S. 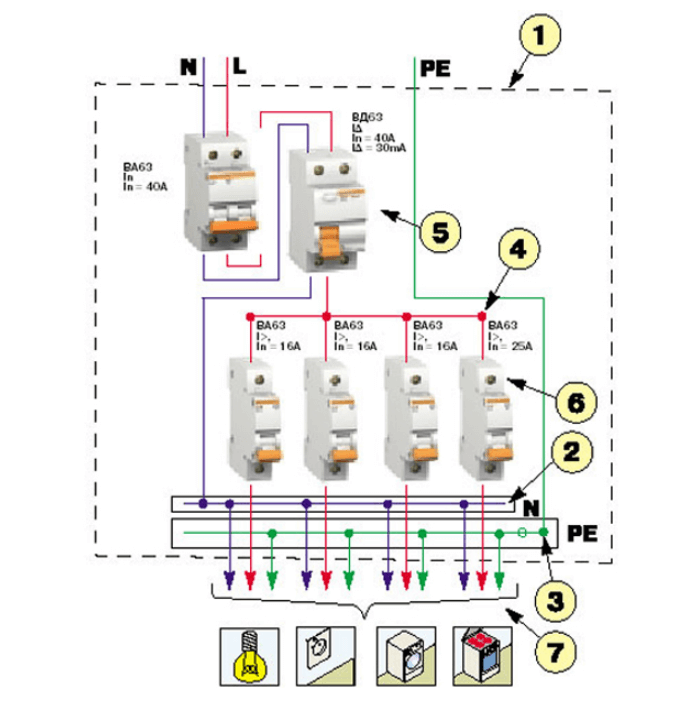 The dotted line (1) indicates the switchboard housing, (2) and (3) it is zero and ground bus. The fourth element of the project is the comb that connects the circuit breakers. (5) - a single-phase RCD at 40 Amps and a leakage current of 30 mA, well, and (6) - group machines (3 to 16 Amps and 1 to 25, for hob connection) At the input, a single-pole circuit breaker with a nominal value of 40 Amperes is installed. The lowest row of the electrical circuit consists of residential consumers - a group of lighting, sockets and powerful electrical appliances (in our case, stoves).

Well, there are still spacious apartments with electric heating and a group of powerful consumers of electricity. In this case, the electrical circuit of the input distribution panel will be more serious and the number of automatic machines is not inferior to a private house. So, to your attention, a distribution board diagram for an apartment with an improved layout: 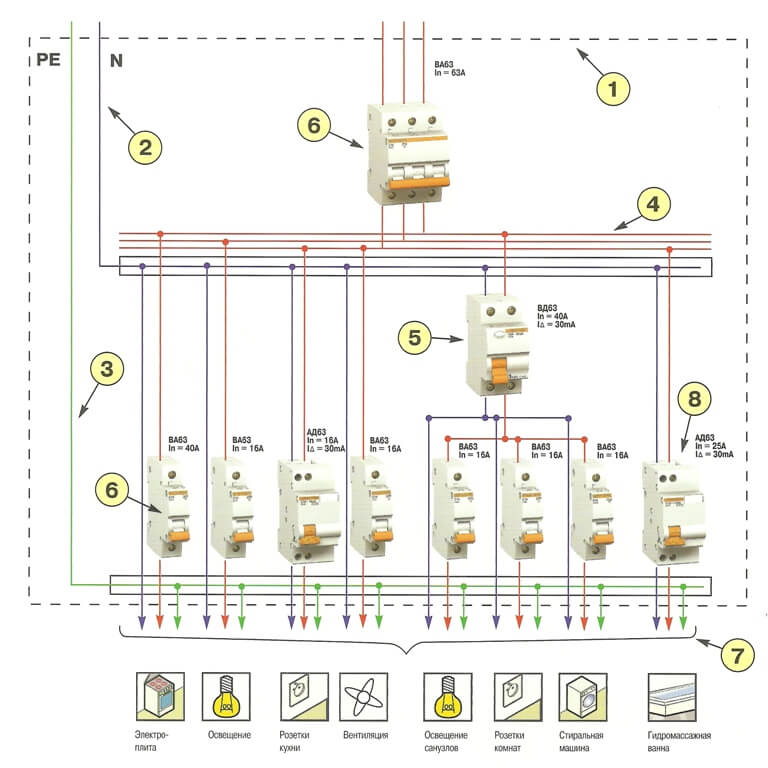 With so many electricity consumers, there should be a three-phase network (380V) and at the input, respectively, a three-pole 63 Ampere circuit breaker.For the rest, there is an RCD for 40 Amps, a group of automatic machines for 16 and 25 Amperes (depending on the purpose), well, and a separate residual current device for electrical wiring in the bathroom, with a leakage current of not more than 30 mA, according to the PUE p. 7.1.38.

A modern solution is a system of protection against water leaks. It will allow you to save your housing and neighbors' housing from flooding during an emergency, or if you forget to turn off the water. So, at the repair stage, to protect against leaks, you need to lay a separate cable in the bathroom, from the shield. The control module must be connected to the AC mains using a residual current device (RCD) or a differential circuit breaker with a tripping current of not more than 30 mA. A popular water leakage protection system is Neptun. You can read more about it in our review.Neptun Prow + Wi-Fi.

Focusing on the provided schemes for connecting the apartment panel, design your own version and proceed to the electrical work! About, how to assemble a distribution board with your own handswe already told!

In a private house there can be either a single-phase or a three-phase power supply network. In the first case, the wiring diagram will be similar to the project for powering a one-room apartment. The simplest option for connecting a dashboard for a residential building will look like this: 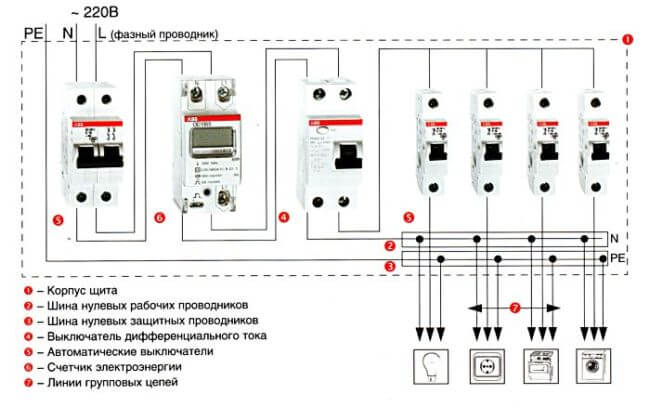 In this 220V private house switchboard circuit, a bipolar switch is installed at the input, then an electric meter is connected, followed by an RCD and a group of single-pole circuit breakers. Everything is quite simple and at the same time according to GOST, PUE and the requirements of other documents. If a three-phase network is connected to your site, then the circuit diagram of the flap assembly will look different. Consumers from outbuildings - a garage, a utility block, or even a bath can already be added to it. The shield, of course, will be large and with many branches, so for an example we found a rather suitable option. About how to assemble a three-phase shield, read the article: https://my.electricianexp.com/en/instrukciya-po-sborke-trexfaznogo-elektroshhita.html.

Scheme of the distribution board of a private house at 380 V, using an RCD: 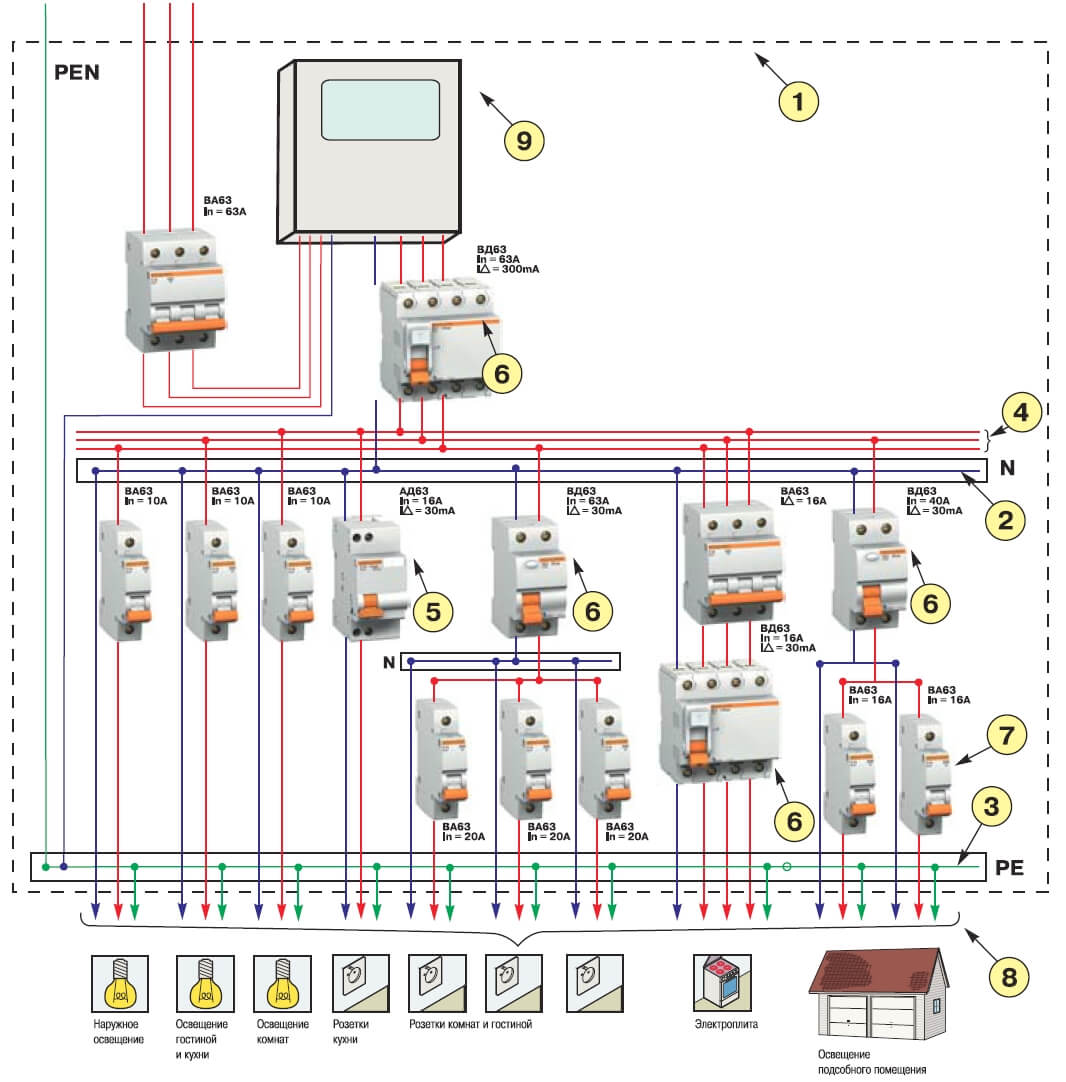 I would like to add a small description to this circuit diagram: 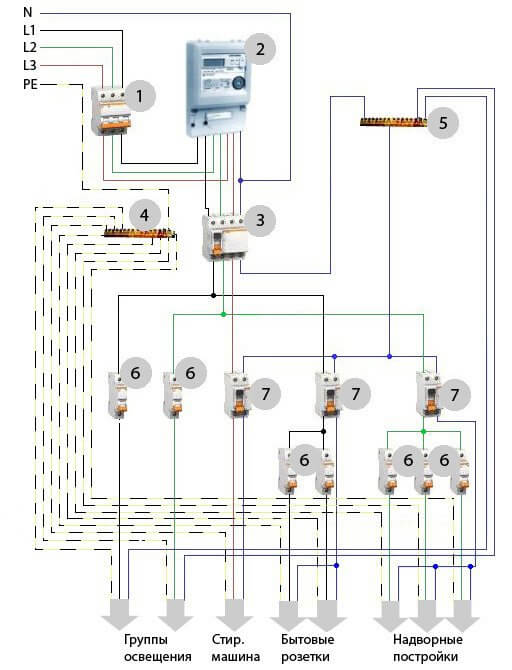 The last 2 circuits of a 380 Volt switchboard can be used not only to power an individual residential building, but also to power a spacious suburban cottage! We also recommend that you look at the article on how to conduct wiring in the house!

In the end, we recommend watching a useful video that shows how to assemble an electric shield according to the scheme: