What is a modular contactor and what is it for?

A modular contactor is an electric electromagnetic device in which control is carried out remotely. It is intended for use as a switching device (used to turn current on and off in an electrical circuit). The contactor can include from one to four poles of other contacts, and also use AC and DC networks (depending on the type: electromagnetic, electro-pneumatic, pneumatic, lockable). Most often, this device is used to control powerful electric motors. Because Since it refers to electromagnetic devices, the force for closing and opening contacts is created by an electromagnet. In this article we will try to consider in detail the principle of operation, purpose and design of the contactor.
Content:

Where and why is it applied

Most often they use a modular contactor when controlling and switching the heating pump and other various devices (for example, in ventilation systems). They became popular and in demand when assembling panels in an apartment and various automation systems. For example, control of light, a borehole pump, a circuit for automatically switching on the reserve, and so on. Why? Because the contactor fits perfectly with other modular devices, while not violating the ergonomics in the shield. You can verify this by looking at a visual example in the photo: 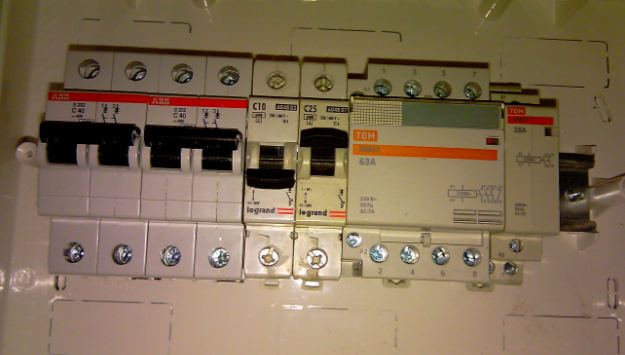 It is worth remembering that the mains voltage should be no more than 380 volts at a frequency of 50 Hz. But, despite this, the contactor can work at high powers. There are several more advantages of this device. Such as the almost complete absence of noise and vibration, which is quite a positive effect when applied not only to the home shield, but also in public places (hospital, apartment, schools, institutes, etc.), since other switching devices are too susceptible to strong vibration.

By the way, size matters. After all, the small size of the modular contactor allows you to install it on din rail. The design provides for arcing chambers for extinguishing the arc, which occurs in the process of changing the current load. In addition, there are single-phase and three-phase contactors, which allows you to connect to any network.

You can learn more about modular contactors by watching this video:

To understand the principle of the contactor, it is necessary to study its structure. After all, the device itself consists of several parts. Let's start with the coil. It is needed to create a magnetic current. If the coil is also a choke, then it provides the driving forces for the operation of the devices. To prevent malfunctions, it is worth checking the voltage of a new coil. 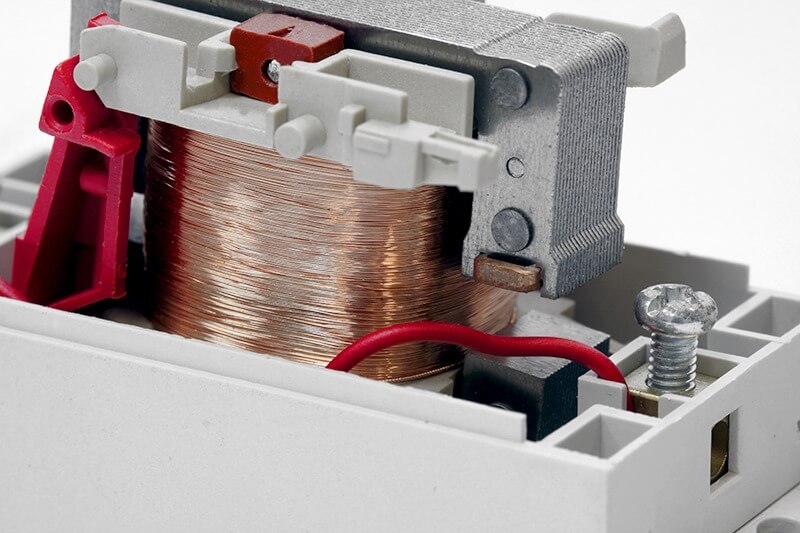 When replacing, check several important points. Such as the lack of touch of moving parts and the absence of air gap when the armature and the core touch.The next part is the contact spring. Maintains fixed contact tension. After joining the contacts, the rolling of the rolling to the stationary one takes place. In this case, the destruction of oxide films and various chemical compounds occurs, which appear on the surface of the contacts. If, when moving the contacts, the movable turns out to be stationary, then this is called the preliminary tension of the contact spring. This helps to reduce the vibration of one contact to another.

The next part of the modular contactor is movable. It consists of contacts that move and create work. And another part of the device is the closing contacts. It is precisely on them that moving contacts move in order to create work. The last two parts can be combined with one phrase - contact system. After all, in fact, the parts differ a little, but together they create a certain force. It should be noted that they are attached to the anchor, but are in different places, because the mobile ones will be on the traverse, and the stationary ones on the hull.

When the contacts do not touch and there is no current in them, then this is called a “rest state”. When voltage is applied to the coil, an electromagnetic field is created, which creates EMF, electromotive force. Power contacts on the EMF attract the core. If the voltage supply is stopped, the electromagnetic field will disappear and the armature (cores) will not be held. In this case, with the help of a spring, all contacts will return to their original position, breaking the circuit. This is the main principle of the contactor. You can see in more detail how the device works and what it consists of, in the video below:

Device and scheme of work

Now we can say that modular contacts (like other contactors or starters) work when voltage is applied to or disconnected from an electromagnetic coil. Instructions for connecting and operating are quite simple and will not make you bother with it for a long time, because when using it you can easily master the principle of the device.

On the device itself you will find several marks, which, in turn, mean the rated current, the number of contacts and their type. At the moment, you can choose among 25 options and models of such a device. In this case, their mass will be different. When choosing the appropriate option, it is worth paying attention to all these indicators, because the rated current of contacts and the rated voltage must correspond to the field of application. For example, we recommend that you familiarize yourself with the characteristics of the devices in the table: 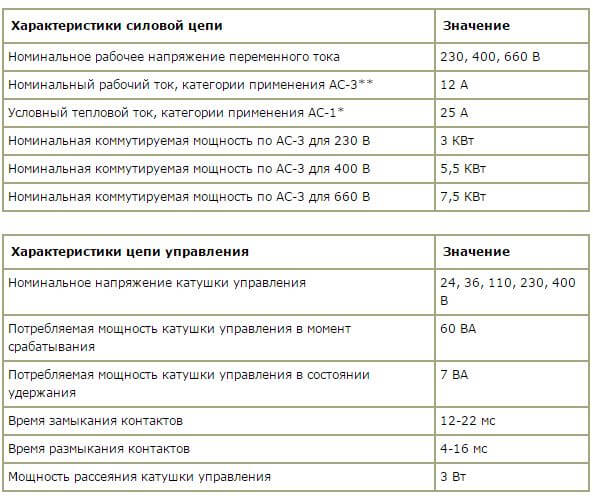 So we examined the principle of operation, purpose and arrangement of contactors. We hope the information provided was interesting and useful for you!