So, during the ironing process, you plugged in the plug, but after a few minutes realized that the iron is not heating up. In this case, it is not necessary to throw out the equipment and go to the store for a new one, as Sometimes the cause of the breakdown is quite simple and does not require professional skills in the repair of electrical appliances. Next, we will consider what to do if the iron ceases to heat up, as well as how to repair existing damage with your own hands.
Content:

First, you must visually inspect the housing for cracks, defects, and signs of melting of the housing. Perhaps the appearance immediately and will show what exactly is the cause of the breakdown of the iron. If the inspection did not give anything, you need to completely disassemble the case for self-diagnosis of all the constituent elements. 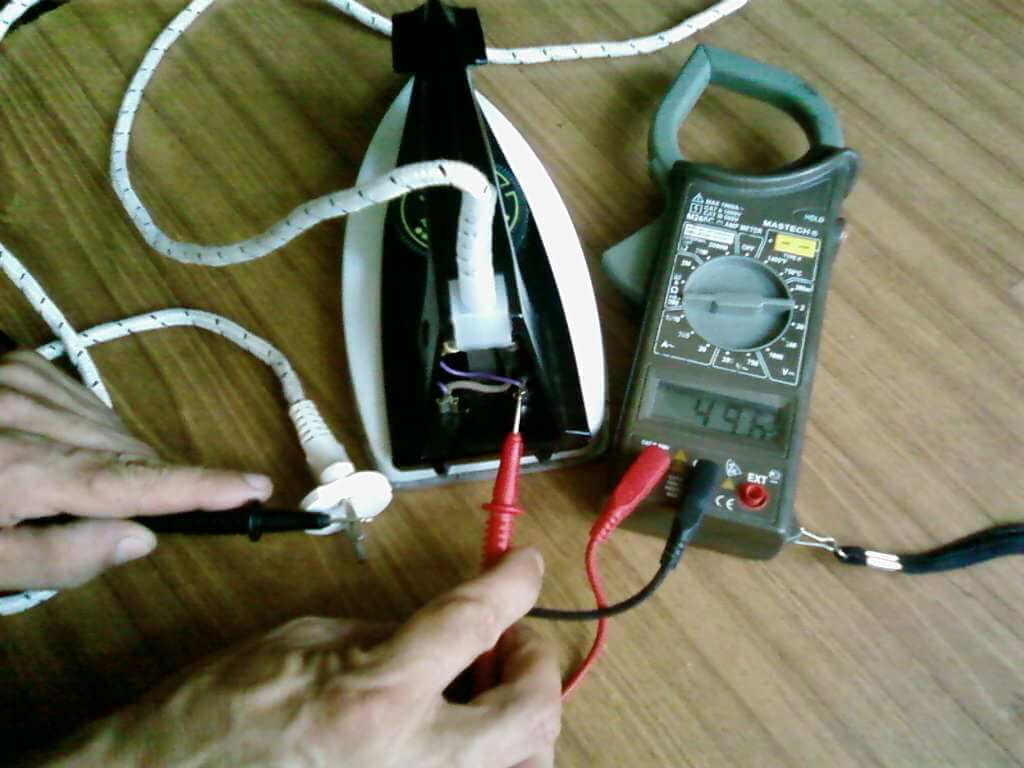 We draw your attention to the fact that it is sometimes quite difficult to disassemble the iron. This is due to the fact that every year manufacturers devote more time to the design of the appliance, creating inconspicuous latches and screw holes. Initially, prepare a set of screwdrivers and a knife that will be useful to you for further actions.

Video instruction for disassembling the case

One of the main malfunctions of the iron is precisely the power cord, which you, in fact, insert into the outlet. 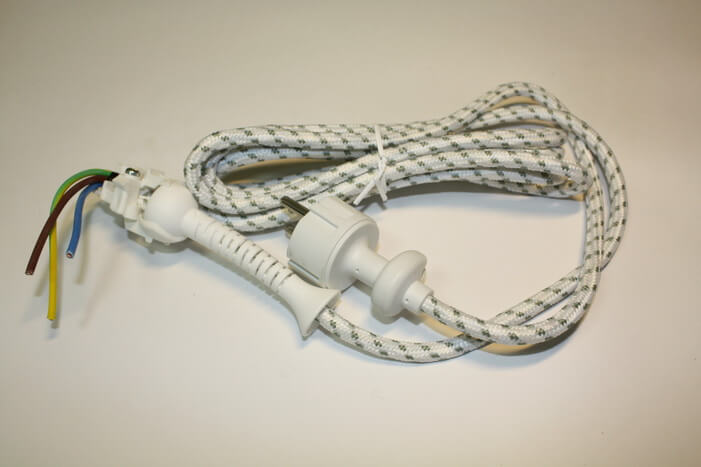 Get to the place where the contacts are connected to the heating element and if there are no visible malfunctions, use the tester to ring the cord to determine its operability. 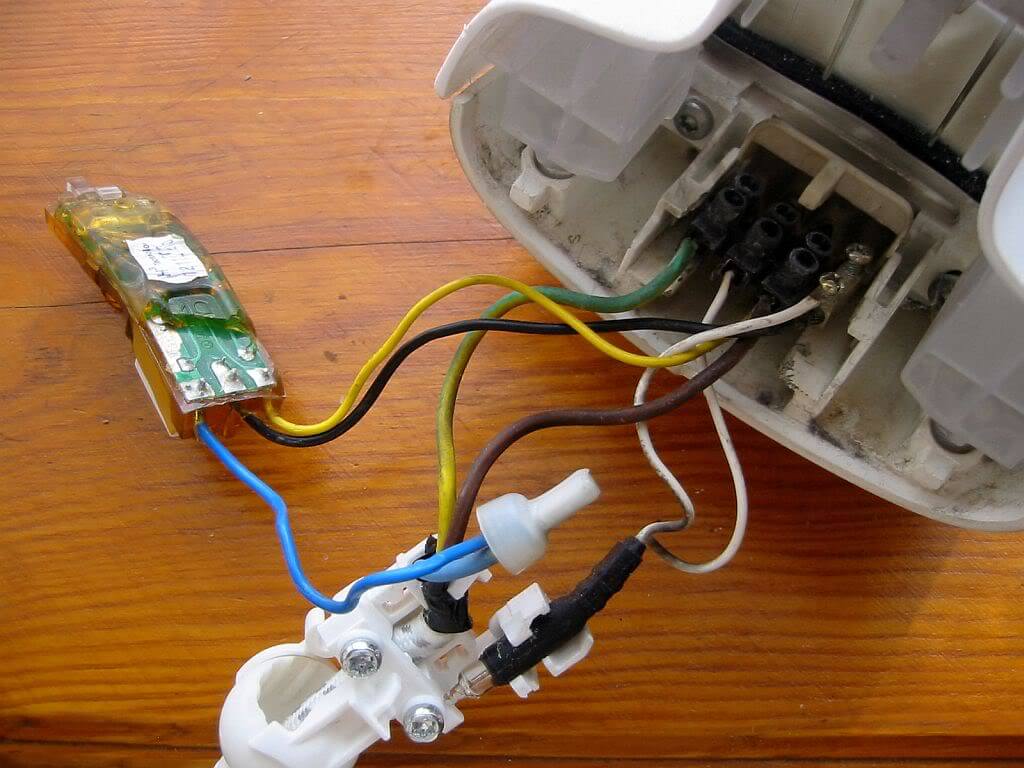 For calls you can use homemade controlconsisting of a piece of wire, a battery and a light bulb. If the light is on when connecting the contacts to both ends of the cord, go ahead.

If the power cord is the cause of the breakdown, you can try to shorten it by 10-15 cm (maybe the problem area will be removed). Does the iron still not work? Replace the cord with a new one!

The second in line is a thermostat. We also check it with the help of dialing, which we attach to the contact group. 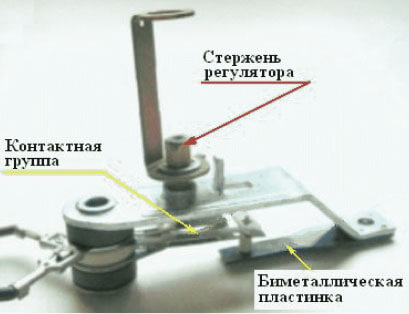 When the temperature control scrolls to the circuit side, the electrical circuit should function. Is the light off? We clean the contacts with sandpaper and check again. Immediately recommend that you watch the video repair instructions:

How to repair a temperature controller

Is the thermostat working, but the iron does not heat up? We proceed to check the thermal fuse!

More often than a power cord, this circuit element fails. Its main purpose is to disconnect the electric circuit if the temperature of the heating element exceeds the nominal value.

Using the continuity, we determine the fuse performance. If the cause of the breakdown of the iron in it, replace it with a new one, or even remove it from the circuit. During normal operation of the temperature controller, there is no need for a fuse.

Well, the last of the reasons why the iron does not work is the failure of the heater. If the equipment turns on, the light is on, but the sole does not heat up to the required temperature, most likely this is the case. As in previous cases, with the help of a homemade tester, we determine the performance of the product. The heating element is fixed to the sole and if the mounting location is one-piece, then most likely you will have to say goodbye to the purchase (if the reason is in it). 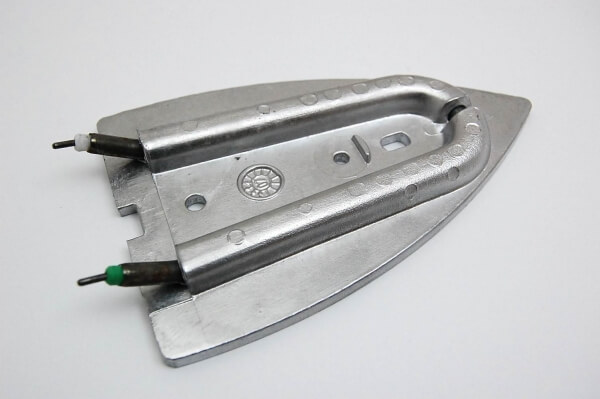 In the event that the heater is connected to the sole using tips, you can try to repair the iron with your own hands, cleaning the contacts with sandpaper. Still not heating up? We send the equipment for recycling, as a new part costs almost the full cost of the device!

We draw your attention to the fact that if you throw the equipment into the trash, it will be more correct to disconnect the power cord and leave it to yourself. Perhaps this element will be useful to you in subsequent repairs, especially since it will not take up much space in the cabinet!

If the malfunction is that the iron steamer does not work, then most likely it is necessary to clean the internal cavity of vaporization. To do this, we recommend that you use a solution of water and vinegar in a ratio of 1 liter to 1 cup. We install the sole in the container (as shown in the picture), bring the water on the stove to a boil, turn it off and wait until it cools down. After that, we repeat the event 3 more times, which is quite enough for high-quality cleaning of the spray gun. 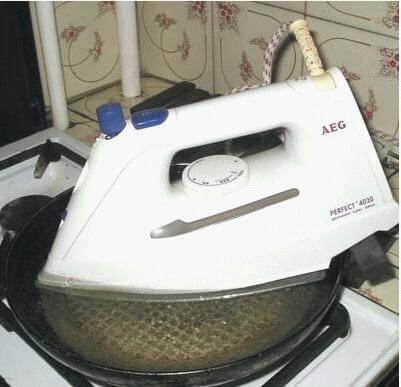 In stores you can see special cleaning agents for scale, but we highly recommend against using them. This is due to the high cost of funds and at the same time low efficiency, compared with the folk method! It should also be noted that on the thematic forums there are many negative reviews about the fact that the iron does not work after cleaning with salt. This is due to the fact that salt crystals clog holes for supplying steam, as a result of which you have to carefully clean the sole.

Another reason the sprinkler does not work is that the steam supply button has broken. It can also be called a tester and replaced if necessary.

That's the whole DIY repair manual for the iron. As you can see, the event is quite simple and even a novice electrician can do it! Finally, I would like to note that if the red indicator blinks on the case, do not panic, because this may indicate a specific mode of operation or automatic shutdown after heating. Read the instructions that came with the kit to understand the reason for the blinking. We hope that now it became clear to you what to do if the sole of the iron does not heat up and how to repair the breakdown at home!