How does an old and new type electricity meter work?

We all know why we need an electricity meter - to properly account for electricity consumption. Based on the readings of the electric meter, payment is made “for light”. In this article we would like to tell readers Sametrick.ru about the device and the principle of operation of the electricity meter. For you, we will consider both the electronic model and the old model - induction.
Content: 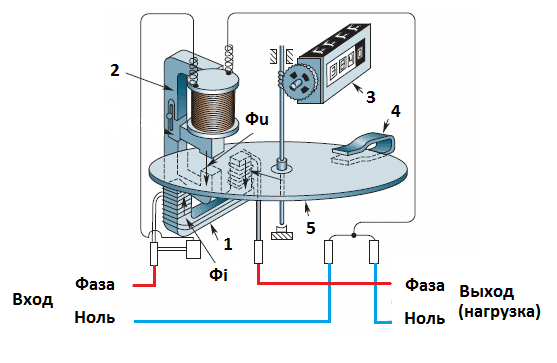 As can be seen in the diagram, the device of the induction energy meter is quite simple. As for the principle of operation, it is also uncomplicated. First, an alternating voltage is supplied to a parallel winding (voltage coil) and then flows to a second, current coil. Between the two electromagnets of the coils, magnetic eddy currents, which, in fact, contribute to the rotation of the disk. The greater the current, the faster the disk will spin. In turn, the counting mechanism works according to the following principle: rotation from the disk is transmitted to the drum due to the worm gear (this is facilitated by a worm mounted on the axis of the disk, which transmits rotation through the gear, as can be seen in the diagram above).

You can clearly see how the induction electric meter works, in the video below:

The scheme of the meter

We draw your attention to the fact that the principle of operation of a single-phase electricity meter of the old model is similar to the three-phase model.

In an electronic meter, for example, Energomera TsE6803V, there is no drive, no worm gear. The device of electricity meters of a new sample is shown in the diagram and photo below:

The principle of operation of the electronic model is that current and voltage sensors transmit signals to the converter. The latter, in turn, transfers the code to the microcontroller for further decryption and data transfer to the display. As a result, we see how many kilowatts of electricity are currently consumed.

This video details the device of the electronic and induction counter:

How are electricity meters

As for multi-tariff metering devices, such as day-night or three-tariff models, their device also has a built-in memory module that remembers the amount of current “wound” in different modes: day and night.This is necessary in order to correctly calculate the payment for electricity (from 23:00 to 7:00 the cost of a kilowatt is less than the rest of the day). About advantages and disadvantages of double tariff electricity meters can read in our article.

There are also models of electricity meters with a remote control. A mechanism has been introduced into their design that can block the system of calculating the consumed electricity.

That's all I wanted to tell you about what device and how electricity meters work. We hope the information was understandable and useful for you!