Disputes over the need to move the meter outside the apartment, house or land do not subside. From the point of view of the energy sales organization, these are reasonable requirements. Thus, inspectors have unhindered access to metering devices. In this article we will tell you whether it is legal to require the removal of the electric meter to the street (or to the landing) and who should pay for the work.
Content:

With a metering device taken out, it is easy to detect an illegal connection to the electric network with the aim of theft of electricity. As well as energy, they are guided by a document that describes the conditions where to mount them.

Such places may be:

However, recommendations for the use of electricity meters are prescribed in the PUE. Where it is said that the meters should be in dry rooms with a temperature not lower than zero degrees (paragraph 1.5.27. chapter 1.5).

When moving the meter to the border, temperature conditions cannot be observed. These contradictions in the documents are easily resolved.

The industry produces devices that can be operated at an outdoor temperature of -30 ° C. And only in exceptional cases, energy can meet the needs of consumers and allow the installation of devices from other places.

Typically, the requirement of removal of the counter arises in the case of connecting a house under construction, a cottage or, if necessary, verificationreplacing the counter. The service life of the majority, which does not exceed 16 years.

When the device is taken out to the street, installation costs will not be so significant and consist of acquiring a box with automatic devices and a counter. In addition, you will have to purchase wires to connect the box to the house entrance.

Electricity networks coordinate the installation location of the device and develop a project according to which it is necessary to make all the connections. Install the electric meter. For example, as shown in the figure, placing it on the facade of the house. 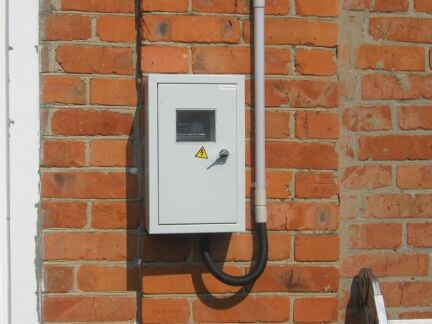 After fulfilling the conditions described in the terms of reference, the electricity network connects electricity. 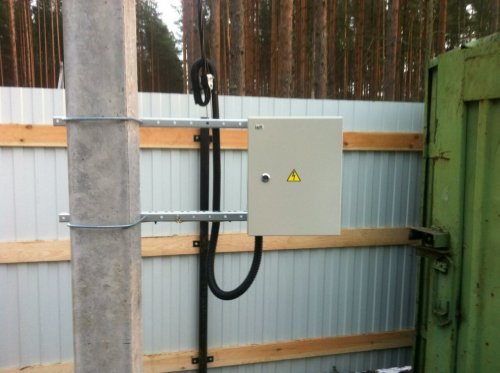 In this case, it is necessary to observe the condition: nothing should interfere with the power grid worker during repair work on the line. Those. the shield is mounted at a distance allowing the electrician to freely climb the pole with the help of cats.

The optimal solution for the removal of the device is the use of a stand-alone support designed for mounting a special box for installing the meter. It should be borne in mind that for the connection of a single-phase line and a three-phase, various specifications are issued.

To connect the three phases, it is necessary to install the ground loop and carry out its verification. And in the shield, mount a lightning protection device. Without these measures, the power grid will not make a connection.

These are the main provisions that apply to all consumers. However, there are some differences.

Removal of metering devices in SNT


Issues of installing electric meters outside the home also concern SNT members. In his requirements, the chairman tries to reduce the theft of electricity by taking the meter from the house to the street.

But members of society do not want to do this. Because most live in SNT only in the warm season. The rest of the time no one guarantees the safety of the equipment. If the meter is taken out of the country house, it can be stolen in winter.

Removal to the border of the site

Starting the construction of a cottage or a private house, the owner needs electricity. In this case, a metal pole is mounted at the border of the site or, as it is also called - pipe rackon which a sealed box is mounted.

The meter is installed in it. The figure below shows an option for such a connection. 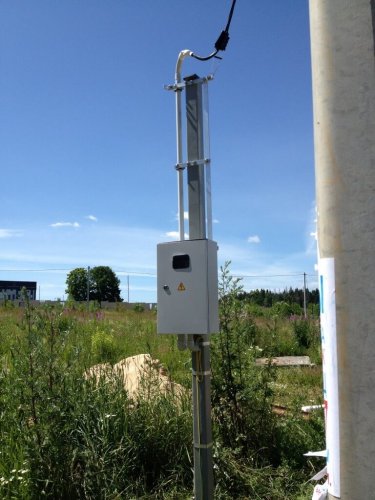 If it is necessary to connect a constructed building or to replace a failed device, then installation can be carried out directly on the fence of a private house. The main condition should be a reliable design of the fence. 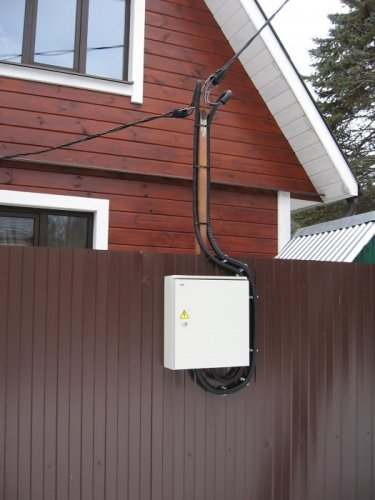 The figure above shows the option of placing the box on the fence.

At the same time, the energy sales inspector has the opportunity not only to verify the readings, but also to check the absence of additional connections. If theft of electricity is detected, then the owner will face heavy fines.

Transfer to the stairwell


This problem affects a small number of people. Because in most apartment buildings, meters are mounted in electrical switchboards at sites.

The law stipulates that in the absence of the possibility of installing devices on the border of the balance sheet, it can be installed in close proximity to the border.

Therefore, the removal of the device from the apartment to the entrance does not contradict the law. And the power grid gives their consent.

If there is a need to remove the device, then technically this is not difficult. In electrical panels there is enough space to accommodate electric meters. 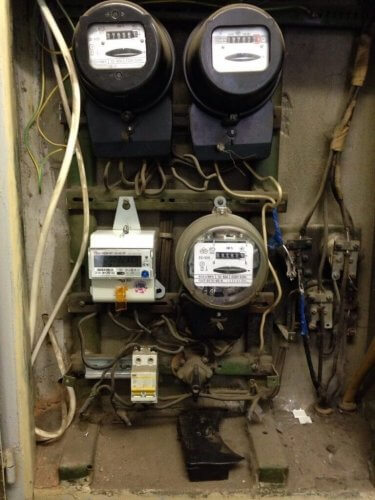 Homeowners who have encountered this problem are asking who should take out the electricity meter and at whose expense it is done. And who is responsible for the safety of the equipment.

The owner purchases the devices, installs them on their own, and energy sales specialists check, supply voltage and install seals.

Because all equipment is purchased by the owner, then he is responsible for the safety of devices and other equipment placed in the box. The decision on removal can be challenged in court. But the courts are governed by law and take the side of the organization that supplies electricity.

It should be borne in mind that all the time the trial will be conducted, the consumer will pay for the consumed electricity not according to the meter, but at a special tariff. This will result in additional costs.

The 2018 law of December 27, No. 522-FZ, provides for the free replacement of a failed electric meter. It is planned to change it to smart devices. They can transmit data directly to energy sales in real time. However, a material base capable of collecting information must be created for this. Now this opportunity is not available in all regions, therefore, free replacement is not yet carried out everywhere.

So we figured out when the removal of the electric meter to the street is required and whether it is legal. If you have questions, ask them in the comments under the article!