The law of total current in simple words

The subject familiar to many, entitled “Electrical Engineering”, contains in its program a series of fundamental laws defining the principles of physical interaction for a magnetic field. They extend their effect to various elements of electrical devices, as well as their structures and environments. The physics of the processes occurring in them relates to such basic concepts as currents of electricity and fields. The law of the total current establishes the relationship between the movement of electric charges and the magnetic field created by it (more precisely, its intensity). Modern science claims that its application extends to almost all environments.

The essence of the law

The considered law applicable in magnetic circuits determines the following quantitative relationship between its constituent components. The circulation of the magnetic field vector in a closed loop is proportional to the sum of the currents penetrating it. To understand the physical meaning of the law of total current, you will need to familiarize yourself with the graphic representation of the processes described by him. 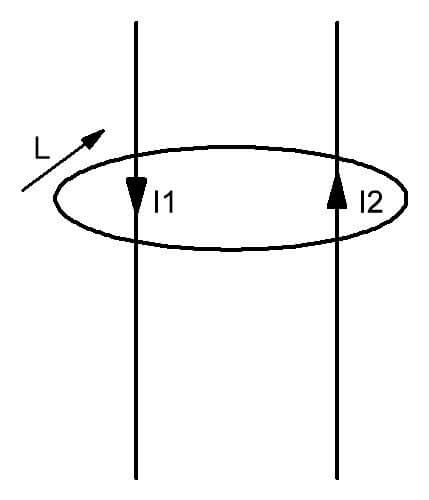 It can be seen from the figure that about two conductors with currents I1 and I2 flowing through them, a field is formed limited by the circuit L. It is introduced as a mentally imagined closed figure, the plane of which is pierced by conductors with moving charges. In simple words, this law can be expressed as follows. In the presence of several flows of electricity through the imaginary imaginary surface covered by the contour L, a magnetic field with a given distribution of tension is formed within it.

For the positive direction of the vector in accordance with the law for the contour of the magnetic circuit is selected clockwise. It is also imaginable.

Such a definition of the eddy field created by the currents suggests that the direction of each of the currents can be arbitrary.

For reference! The introduced field structure and the apparatus describing it should be distinguished from the circulation of the electrostatic vector "E", which is always equal to zero when the circuit is bypassed. As a result of this, such a field refers to potential structures. The circulation of the vector “B” of the magnetic field is never zero. That is why it is called a “vortex”.

In accordance with the law under consideration, the following simplified approach is used to calculate magnetic fields. The total current is represented as the sum of several components flowing through a surface covered by a closed circuit L. Theoretical calculations can be represented as follows:

The magnetic field along the contour is calculated on the basis of the calculations obtained by special techniques. To find it, it is necessary to integrate this parameter over L using the Maxwell equation presented in one of the forms.It can be applied in differential form, but this will complicate the calculations somewhat.

If we use the differential representation, expressing the law of the total current in a simplified form will be very difficult (in this case, additional components must be introduced into it). We add to this that the magnetic vortex field created by the currents moving within the circuit is determined in this case taking into account the bias current, which depends on the rate of change of electric induction.

Therefore, in practice, in TOE, the presentation of formulas for full currents in the form of summation of microscopically small segments of the contour with the eddy fields created in them is more popular. This approach involves the application of the Maxwell equation in integral form. When it is implemented, the contour is divided into small segments, which are considered to be straightforward in the first approximation (according to the law, it is assumed that the magnetic field is homogeneous). This value, denoted as Um for one discrete section of length ΔL of the magnetic field acting in vacuum, is defined as follows:

The total tension along the full contour L, presented briefly in integral form, is found by the following formula:

The law of the total current for vacuum

In its final form, drawn up according to all the rules of integration, the law of total current looks like this. A closed loop vector “B” can be represented as the product of the magnetic constant m in the amount of currents:

where n is the total number of conductors with multidirectional currents covered by a mentally imagined circuit L of arbitrary shape.

Each current is taken into account in this formula as many times as it is completely covered by this circuit.

The final form of the obtained calculations for the law of total current is greatly influenced by the medium in which the induced electromagnetic force (field) acts.

The considered relations for the law of currents and fields acting not in a vacuum, but in a magnetic medium, take a slightly different form. In this case, in addition to the main current components, the concept of microscopic currents arising in a magnet, for example, or in any material similar to it, is introduced.

The necessary relation is derived in full from the theorem on the vector circulation of magnetic induction B. In simple terms, it is expressed in the following form. The total value of the vector B when integrated over the selected circuit is equal to the sum of the macro currents covered by it multiplied by the coefficient of the magnetic constant.

As a result, the formula for "B" in a substance is determined by the expression:

where: dL is the discrete element of the circuit directed along its bypass, Bl is the component in the direction of the tangent at an arbitrary point, bI and I1 are the conduction current and the microscopic (molecular) current.

If the field acts in an environment consisting of arbitrary materials, the microscopic currents characteristic of these structures should be taken into account.

These calculations are also true for the field created in the solenoid or in any other medium with finite magnetic permeability.

In the most complete and comprehensive system of measurements of GHS, the magnetic field strength is represented in Oersteds (E). In another existing system (SI), it is expressed in amperes per meter (A / meter). Today, oersted is gradually being replaced by a more convenient unit in operation - an ampere per meter.When translating the results of measurements or calculations from SI to GHS, the following ratio is used:

In the final part of the review, we note that no matter what the wording of the law of full currents is used, its essence remains unchanged. In his own words, this can be represented as follows: it expresses the relationship between the currents that penetrate this circuit and the magnetic fields created in the substance.

Finally, we recommend watching a useful video on the topic of the article: