What is vibration and dance of wires, what do these phenomena depend on

Various mechanical loads and stresses arise on wires and lightning protection cables of high voltage power lines. For example, when the wind is observed such a thing as vibration or dancing wires. What it is, what the consequences and methods of struggle can be, you will learn from this article.
Content:

Vibration of wires are called periodic oscillations of a wire or cable in the span between the supports of power lines. Oscillations occur with a frequency of 3 to 150 Hz in a vertical plane under the influence of laminar air flow. As a result, standing waves are formed, the double amplitude of which can be larger than the diameter of the wire or cable, but at the same time does not exceed 0.005 wavelength.

Stable periodic oscillations are called dance, with a greater amplitude than the previous case and a lower frequency - from 0.2 to 2 Hz. Thus, standing waves are formed with an amplitude of 0.3 to 5 meters, and in some cases more.
The phenomenon is observed on power lines, wires of the contact network and lightning protection cables. The concept of “auto-oscillation” is also applied to the contact network, although in essence it is one and the same. Another name is Aeolian vibration.
So the main difference between vibration and dance is the frequency. Vibration is barely noticeable to the eye due to the high frequency, lower amplitude and the number of half waves, and dancing is a strong vibration with a longer wavelength and amplitude.

Vibration of wires and cables of overhead power lines occurs with a laminar air flow (with a wind speed of 0.5-7 m / s, at a higher speed the flow becomes turbulent), the direction of which is perpendicular or at an angle to them.

Then air flows flow around the cylindrical surface of the wire and a circular flow occurs, while in its upper part (point A in the figure below) the speed of this flow is greater than in the lower one (point B). This occurs due to disruptions of the air vortices from the upper and lower sides, as a result of which an imbalance of pressure appears.

Proper are called vibrations that occur in the system in the absence of variable external influences, as a result of the initial deviation. As happens with a guitar string.

At certain points, antinodes of waves will arise, in them the amplitude will be maximum. Those points that will remain motionless are called nodes. In them, the angular movements of the wire will occur, in simple language - it will bend and rotate. Standing waves occur when the wavelength is equal to or a multiple of the distance between the supports (span length).

The vibration frequency is directly proportional to the wind speed and can be calculated by the formula:

where f is the oscillation frequency, V is the wind speed, d is the diameter, 0.185 is the Strouhal number characteristic in this case.

The formula also shows that the thinner the wire, the more it vibrates. In this case, wind speeds of 0.6-0.8 m / s are especially dangerous, since at a wind speed of more than 5-8 m / s, the amplitudes are small and not dangerous. As a rule, the phenomenon occurs in flights longer than 120 meters, with increasing distance it only intensifies. This is especially important when the length of the OHL crossing is more than 500m, for example, through rivers and reservoirs.

The difference between dancing and vibration in the first place is the amplitude - it is larger and can reach 12-14 meters, as well as a longer wavelength. The nature and trajectory of the dance follows the shape of an elongated ellipse, with the axis deflected 10-20 degrees from the vertical line.

With ice (icing and icing of the line), the diameter of the wire increases based on the formula above - the vibration frequency decreases and the wavelength of vibrations increases.

Ice does not appear evenly, but on the leeward side. As a result, the wires and cables become not cylindrical, but irregular in shape. With this form, during the wind there is a lifting force, in the figure below Vy.

She causes dance. On the left are the dancing waves in the span between the supports, and on the right are the icy cable and the air stream enveloping it. 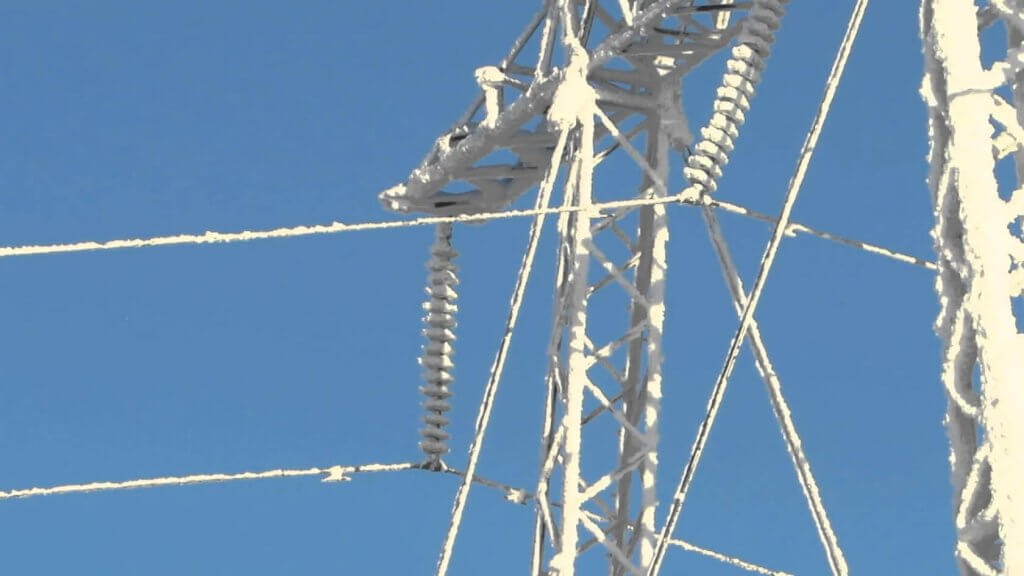 The dance occurs at a higher wind speed than vibration, namely 5-20 m / s, at an angle to the line of 30-70 degrees. Oscillations occur with a lower frequency and greater amplitude.

You can see the external differences between the phenomena of these two phenomena by comparing the following two videos:

Let's see what is dangerous dance and vibration on the high-voltage line. The dance is dangerous because the wires do not oscillate synchronously, and the amplitude can reach such a magnitude that overlap can occur with a lightning protection cable, or between each other. Because of what, electrical discharges occur, with all the ensuing consequences. To prevent whipping, in some cases, insulating spacers are installed between the conductive parts of the lines.

Vibration, in turn, is destructive to the conductors of the conductors, line breaks are also possible at the connections and clamps or exits from the clamps.

Since the danger of vibration and dancing lies in the failure of overhead lines, breaks and short circuits, we will consider the main method of protection against it.

Installation of vibration dampers is the main method of eliminating the considered phenomena. They come in various types. A common feature is that they are made in the form of a rod with sinkers at the ends, which is suspended by the middle part on cables and wires. The type of vibration damper is selected in accordance with the span and diameter of the conductor, according to table 2.5.9. PUE, p. 2.5.85 (Chapter 2.5 PUE). 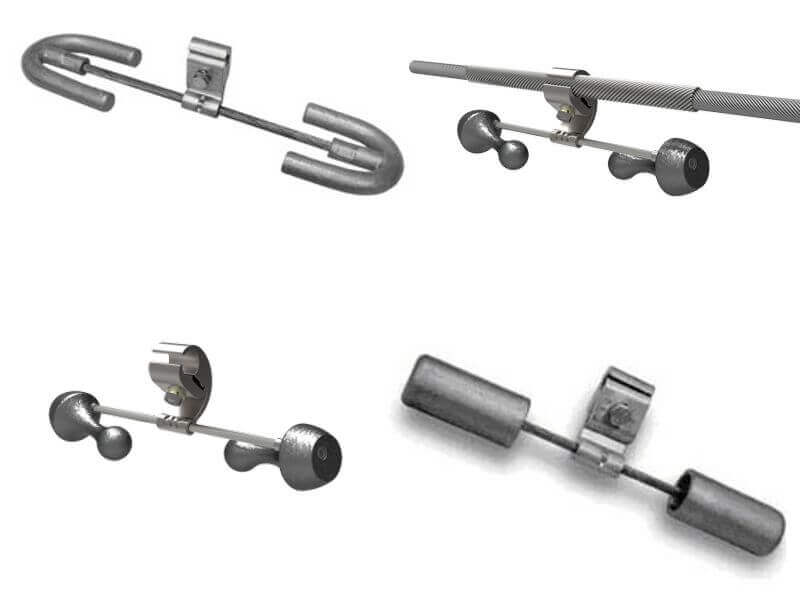 To determine the climatic conditions and calculate the load of mechanical stresses during vibrations, they also use the information set out in clauses PUE 2.5.38-2.5.74, which show wind pressure, ice wall thickness, average annual duration of thunderstorms and other data. If you want to know more, you can get acquainted with RD 34.20.182-90 “Methodological instructions for typical protection from vibration and sub-vibrations of wires and lightning protection cables of overhead power transmission lines with a voltage of 35-750 kV”.