Laying a cable line without a trench is used in almost any project for the installation of electric networks, where there are no obstacles, engineering structures and underground telecommunications. To do this, special equipment is used with movable and traction mechanisms. In this article, we will consider existing methods for trenchless cable laying, as well as provide technology for the work.
Content:

The technology is as follows: before starting work, the cable line is marked with milestones and prepare the surface for the passage of the cable layer (they clear the track from stumps, stones, mounds and holes). Using a knife (5), the cable layer (2) cuts the soil until a gap forms in the ground in which the cable (7) will be placed. The cable is unwound from the drum (3) and as the mechanism moves, a trenchless laying is carried out.

Explanations for the scheme:

The depth to which the cable is laid is monitored every 40 meters using a special measuring bar. When the cable ends on the reel, its end is fastened to the end of the wiring on the other reel, this place is leveled and a connector is installed.

Trenchless laying should begin with a miscalculation. The cable line should be connected by a coupling in those places where it will be convenient to do and continue to operate. Connection should not be made in wetlands or ravines.

The cable line, in this technology, is laid with cable layers. They stretch an armored cable with a voltage of up to ten kilovolts, in which the insulation is made of lead or aluminum. If compared with the method of laying in a trench, then this method significantly reduces the complexity. About, how to lay wiring in the ground, we told in a separate article.

The video below shows an example of work:

Trenchless cable laying, which is carried out in water, under ravines, forests, as well as under the road (automobile railway, tram, highway) is performed in two ways: horizontal drilling of the soil and by puncture. This technique is also used when laying wiring in the areas of oil pipelines, gas pipelines, high-voltage power lines (VLEP), as well as under parks and squares. Further we will consider both methods.

Horizontal directional drilling is carried out from the surface of the earth. A well is formed by drilling a pilot channel with its further expansion. The main feature of this method is the ability to control the direction of the drilling itself, that is, a certain well path is generated.Trenchless laying of the HDD cable implies the formation of a pilot channel, which is performed by drilling a steel shaft into the ground, at which a drill head is located at the end. 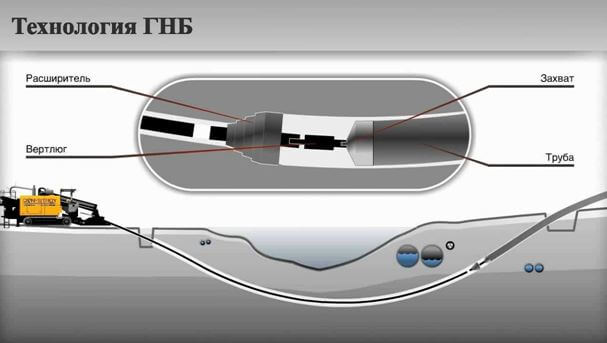 With HDD technology, a special solution is injected into the channel. This solution (concrete) does not allow the rock to collapse. This procedure is done under great pressure. Once the pilot well has been completed, an expander is attached to the barrel instead of the drill head. With the help of a swivel, a polyethylene pipe, which is called a case, is attached to the expander, a cable line is drawn in it. A steel cable is pre-installed in this case, with which the cable will be pulled.

Trenchless laying by the puncture method differs from horizontal directional drilling in that the pilot well in this method is formed by piercing the ground, and not by drilling. By puncture is meant the formation of a channel by pressing a metal rod into the ground, at which a conical tip is attached at the end. Trenchless laying of an electric cable by this method involves compaction of the soil around the rod, and not its selection, as occurs in the HDD method.

Work is carried out from the trench (start) to another trench (reception). In the first pit, a piercing installation is installed. As soon as the rod tip enters the receiving trench, it is replaced by an expander, with which the channel expands and seals in the opposite direction. Due to this, a hole is obtained in the soil, in which the walls are sealed and through which the cable line will pass.

So, the main advantages of trenchless cable laying are:

Finally, we recommend that you watch the demo video, which clearly demonstrates the procedure for laying the power cable using HDD technology:

Now you know how trenchless cable laying is done in the ground. We hope the information provided was interesting to you!