Wiring diagrams of fluorescent lamps without inductor and starter

Fluorescent tube lamps have long been popular in lighting rooms of any size. They work for a long time and do not burn out, which means they need to be serviced much less frequently. The main problem is not the burnout of the light bulb itself (burnout of the spiral and phosphor), but the failure of ballasts. In this article we will tell you how to connect a fluorescent lamp without a choke and starter, as well as power from a low-voltage DC source.
Content:

The classic scheme of switching on fluorescent lamps

Despite the technological progress and all the advantages of electronic ballasts, to this day, a switching circuit with a throttle and a starter is often found. Recall how it looks: 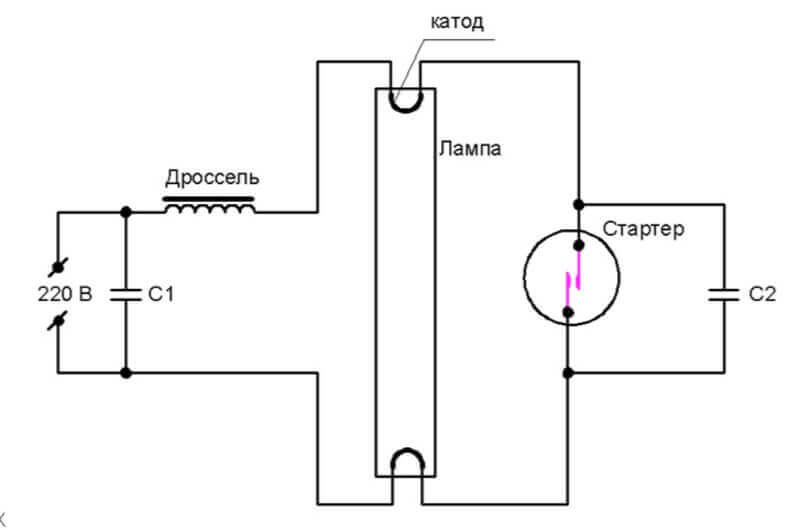 A fluorescent lamp is a bulb that is structurally designed as a straight and swirl tube filled with mercury vapor. At its ends are electrodes, for example, spirals or needles (for products with a cold cathode, which are used in the backlight of monitors). Spirals have two leads to which power is supplied, and the walls of the bulb are covered with phosphor layers.

The principle of operation of the standard scheme for connecting a fluorescent tube with a throttle and a starter is quite simple. At the first moment of time, when the starter contacts are cold and open - a glow discharge arises between them, it heats the contacts and they close, after which the current flows through this circuit:

At this moment, under the influence of the flowing current, the spirals are heated, while the contacts of the starter cool. At a certain point in time, the contacts from heating bend and the circuit breaks. Then, due to the energy stored in the inductor, a surge occurs and a glow discharge arises in the lamp.

Such a light source cannot work directly from a 220V network, because for its operation it is necessary to create conditions with the “correct” power supply. Let's consider several options.

Power supply from 220V without throttle and starter

The fact is that starters periodically fail, and throttles blow out. All this is not cheap, so there are several schemes for connecting a lamp without these elements. You see one of them in the figure below. 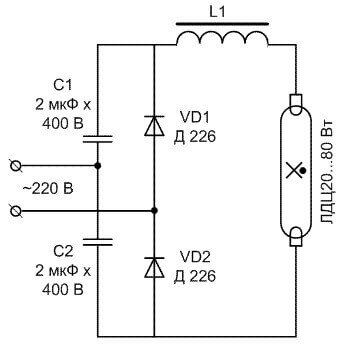 Any diodes can be selected with a reverse voltage of at least 1000 V and a current of no less than the lamp consumes (from 0.5 A). Select capacitors with the same voltage of 1000V and a capacity of 1-2 microfarads. Please note that in this switching circuit the lamp leads are closed to each other. This means that the spirals do not participate in the ignition process, and you can use the circuit to light the lamps where they burned out.

Such a scheme can be used to illuminate utility rooms and corridors. In the garage, you can use it if you do not work on machines in it.Light output may be lower than with a classic connection, and the light flux will flicker, although this is not always noticeable to the human eye. But such lighting can cause a stroboscopic effect - when the rotating parts may seem motionless. Accordingly, this can lead to accidents.

Note: during experiments, keep in mind that the launch of fluorescent light sources in the cold season is always difficult.

The video below clearly shows how to start a fluorescent lamp using diodes and capacitors:

There is another scheme for connecting a fluorescent lamp without a starter and inductor. In this case, an incandescent bulb is used as a ballast. 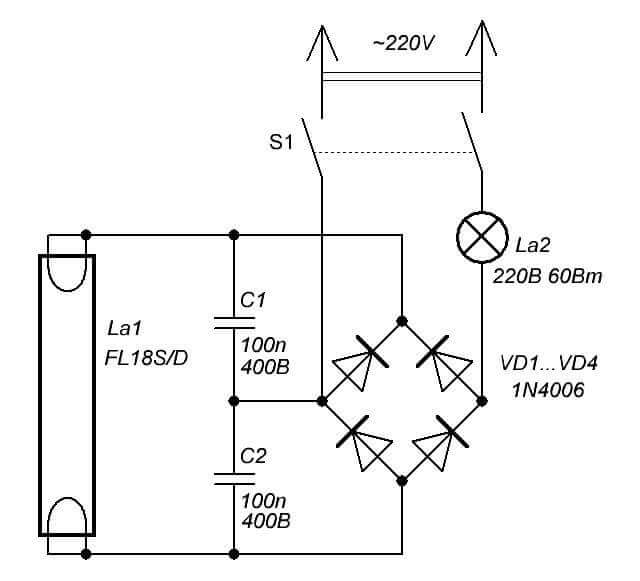 Use an incandescent lamp at 40-60 watts, as shown in the photo: 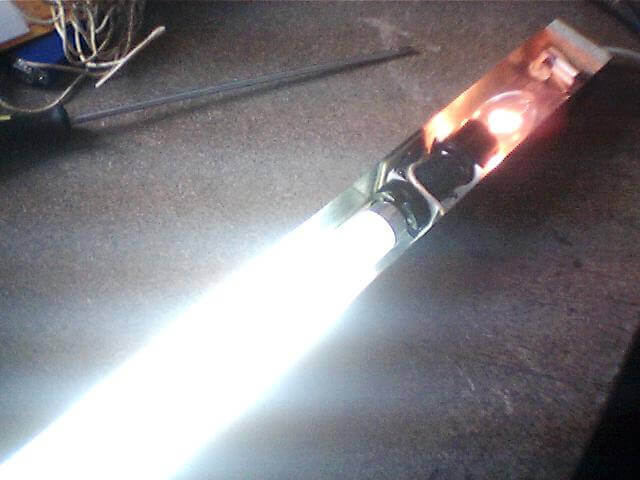 An alternative to the described methods is to use a board from energy-saving lamps. In fact, this is the same electronic ballast that is used with tubular analogs, but in a miniature format.

The video below clearly shows how to connect a fluorescent lamp through an energy-saving lamp board:

But lovers of homemade products often ask themselves the question “How to light a fluorescent lamp from low voltage?”, We found one of the answers to this question. To connect the fluorescent tube to a low-voltage direct current source, for example, a 12V battery, you need to assemble a boost converter. The simplest option is a self-oscillating converter circuit with 1 transistor. In addition to the transistor, we will need to wind a three-winding transformer on a ferrite ring or rod. 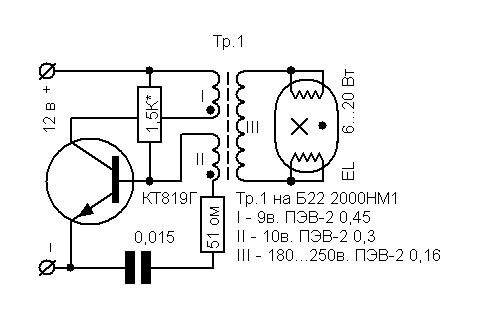 This scheme can be used to connect fluorescent lamps to the vehicle's on-board network. For its operation, the throttle and starter are also not needed. Moreover, it will work even if its spirals burn out. Perhaps you will like one of the variations of the considered scheme. 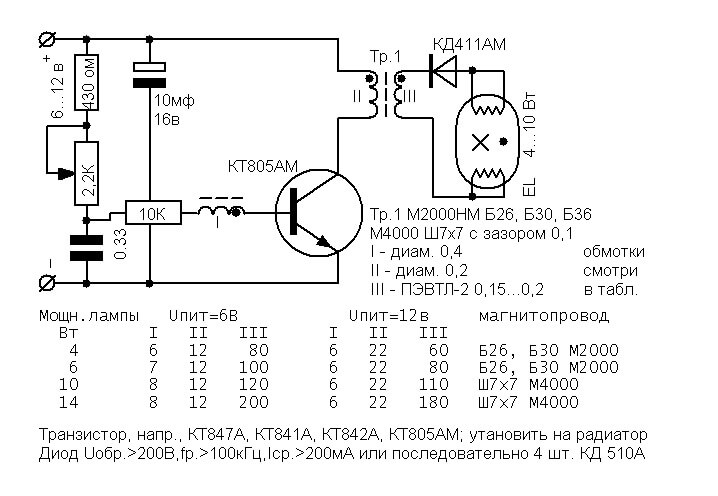 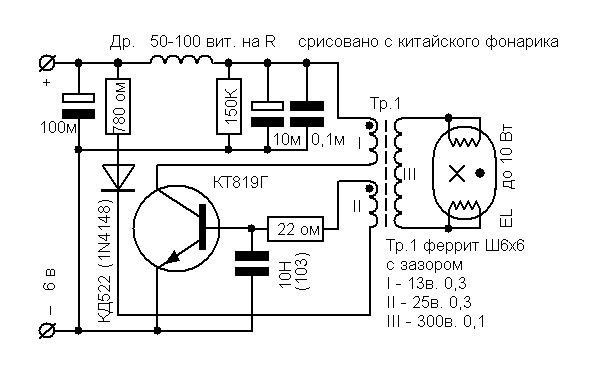 Starting a fluorescent lamp without a throttle and a starter can be carried out according to several of the considered schemes. This is not an ideal solution, but rather a way out of the situation. A luminaire with such a connection scheme should not be used as the main illumination of workplaces, but it is acceptable for lighting rooms where a person does not spend much time - corridors, pantries, etc.