gennadiy asks:
Scarlett mixer ss1041 on the boards on the stator 6 pins. What is connected to them? Better to show the circuit.
The answer to the question:
I don’t know what exactly is in your mixer model, and how the gear shift scheme is arranged there. But usually the speeds are switched using a multi-position switch. Motors are used as collector ones, and this switch switches the taps from the field winding (stator). Thus, the parameters of the engine and its speed of rotation are changed.

In this video you can see an approximate device of another Scarlett mixer model, but it is likely that they are similar, if not identical! A similar (but not his) scheme is given below. Unless there are 4 speeds on the switch. You can figure out the analogy. 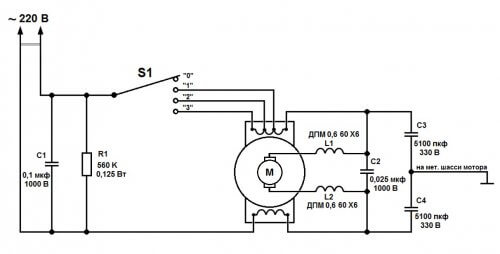