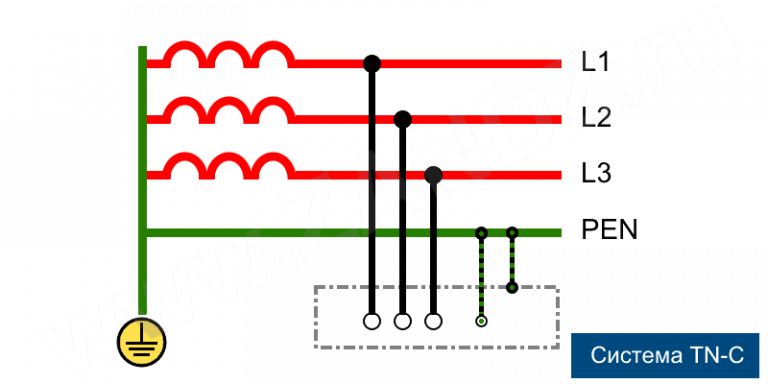 By the way, the decoding of the abbreviation TN-C is as follows: “T” - (terre - ground) means grounded, N (neuter, neutral) - connected to the source neutral (zeroed), C (combined, combined) - zero working and protective wire combined into one conductor throughout the system.

The TN-C grounding system, having its own design features, has both advantages and disadvantages. The advantage of the system, however, not related to electrical safety, is:

TN-C has one drawback, but it, unfortunately, is related to safety - a higher probability, in comparison with other grounding systems, of the loss of the grounding circuit when a single grounded conductor is damaged.

You can often hear that the TN-C grounding system is a “heavy legacy of the past” and has come from the Soviet Union. We can only partially agree with this statement. Indeed, four-wire distribution networks with a grounded neutral imply the implementation of protective grounding according to this scheme. However, the following should be noted: the power supply scheme that took place in Soviet times, and which continues to exist to this day in many old buildings, is by no means a TN-C grounding system, and that's why.

The implementation of TN-C involves connecting to the PEN conductor "all open (that is, accessible for human touch) parts of electrical installations."This means that the metal parts of the body of any electrical appliance included in the electrical network of our home must be “zeroed out”. 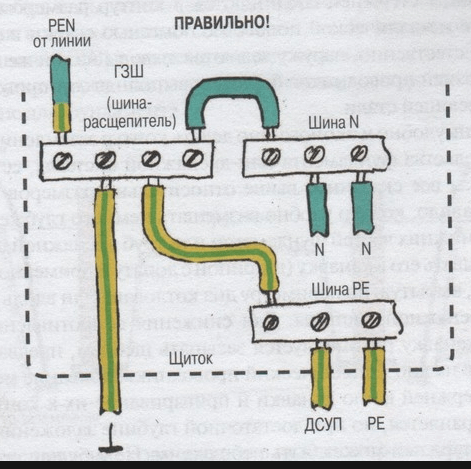 And what do we have in old houses today? A PEN conductor, which is also a working neutral wire, at best, connects to the housing of the input cabinet, at the input of the power cable to the building, and this ends the protective grounding. The apartment wiring is carried out in two wires, and the electrical outlets in the apartments are not equipped with grounding contacts. As a result, a large part of the population uses household electrical appliances without protective grounding of their buildings. And this is despite the fact that the instructions for use of each device emphasize the need for this measure, and all plugs for connecting the equipment to the network are equipped with grounding contacts. Thus, scolding TN-C, while in most houses there is no protective grounding, not quite right.

Implement the TN-C grounding system in an apartment or private house under the power of each owner. To do this, it is necessary to make the separation of the neutral wire that comes with the power cable in the input cabinet or on the floor shield. More details on how to perform PEN conductor separation, we told in a separate article. After this, you need to make a wiring inside the apartment or house with three wires, connecting the third conductor, which will play the role of a protective one, to the grounding contacts of electrical outlets. If an electric stove is installed in the kitchen and it is powered by a separate cable, provide an additional core for connecting the body of the electric stove with a protective grounding conductor.

Do not forget that a phase breakdown on the housing in any electrical appliance causes a short circuit. Therefore, when performing the specified wiring, special attention must be paid to protecting the wiring. It is best to mount an inside-dashboard by installing reliable, correctly selected rated circuit breakers in it. The power supply of the premises of a house or apartment is better divided into groups, each of which is powered from its own machine.

Finally, we recommend watching a video on which all the grounding systems that can be used today are considered:

Now you know what the TN-C grounding system is, what are its pros and cons compared to other options for organizing a protective circuit. In the end, I would like to note that TN-C is prohibited in the new construction, therefore it is necessary to organize a more modern grounding system TN-S.