Today in the world there are over 10 types of sockets and plugs. That is why, when leaving on vacation, it is very important to know in advance which sockets are used in your chosen country. Otherwise, you may find yourself in a situation where the charger from a laptop or mobile phone simply can not be connected in your hotel room. In the best case, you have to go and buy a “local” charger or adapter, but if your vacation spot is resort islands, like in the Maldives, then it will be much more difficult to solve the problem. In this article, we decided to tell the readers of the site Elecroexpert, what are the sockets in different countries of the world and why there is no one single standard, which would seem to be a logical solution.
Content:

After discovering and finding ways to apply electric current to the planet, each monopolist company tried to “knock out” the market for itself by standardizing current frequencies, voltages, and even types of electric currents that were different from competitors. And despite the fact that the transmission of alternating current by wire won the race, still 2 basic standards were legalized: 230 Volt / 50 Hertz and 110 Volt / 60 Hertz. Nevertheless, the first standard is used in most of the world (165 out of 214 countries), this can be seen clearly on the map: 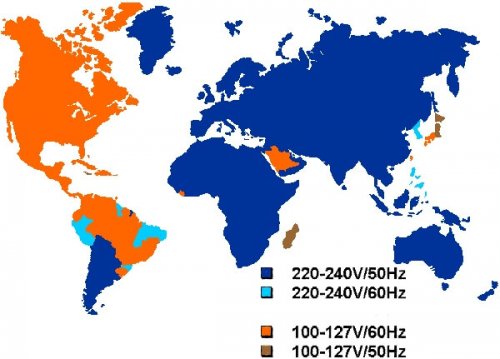 But as for sockets and plugs, in different countries due to the appearance of new electrical appliances on the market, the task was to make their connection to the network quick and safe. So each country, and in particular manufacturing companies, began to offer their own connectors on the market, which subsequently led to their standardization in specific regions.

There were attempts to make a standard one connector around the world, but the well-known world wars nullified every such attempt. In addition, due to the difference in voltages in different countries, if the type of sockets was the same, you could burn the device by connecting it to a network with an excellent voltage from its nominal value. As a result, the development and further use of adapters and transformers became unofficially accepted, which allowed us not only to use imported equipment, but also to use our own outside the country.

So, let's figure out what types of sockets are in different countries of the world.

The following types of sockets and plugs exist in the world (we list them with names): A, B, C, D, E, F, G, H, I, J, K, L, M, N, O. Total 14, but there are also other classifications, we have listed the most popular and well-known types. Consider where which ones are used and how they look.

Immediately bring to your attention the so-called rosette map of the world: 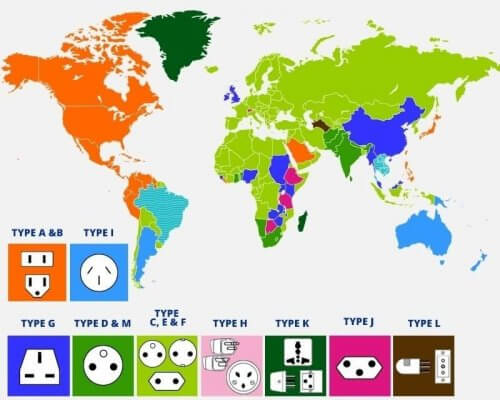 A type A and B (North and Central America, Canada, Japan). They differ only in the presence of an additional grounding contact - the third connector in the socket and the third pin in the plug (for type B).Therefore, the plug A can be connected to the socket B, but on the contrary it will not work, although there is information in the network that some craftsmen just bite off the third contact (grounding) and then you can connect the plug B to the socket A. But you do not need to do this. Another point, in the Japanese "version" of sockets and switches, the pins and connectors are the same, and in the American one pin is larger than the other. Therefore, Japanese plugs can be connected to American outlets, but on the contrary it will not work. 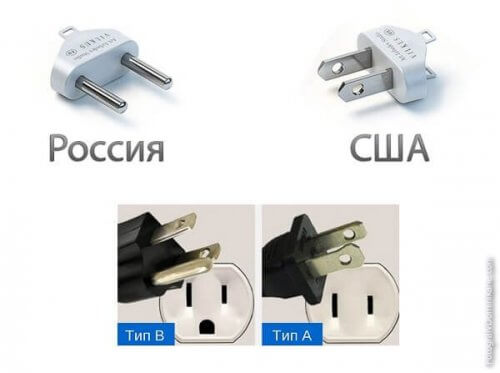 The most famous countries in the world where A / B type sockets and plugs are used: Mexico, Bahamas, Brazil, Dominican Republic, Colombia, Korea, Cuba, Peru, Saudi Arabia, Taiwan, Philippines, Japan. Please note that in some of these countries other standards are also popular.

Sockets Type C previously used in almost all European countries, as well as in the countries of the former USSR, including Russia. The only exceptions are the UK, Ireland, Cyprus and Malta. This is an outdated version, which today is almost not popular (except that cheap Chinese appliances can be delivered with such plugs). 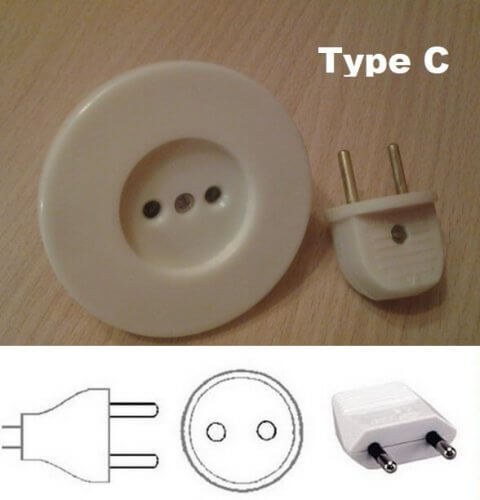 A type D It is used in the former British colonies: in India (including GOA), Nepal, Namibia and Sri Lanka. It is important to note that Type D is an outdated example of the British Type G plug, which is now used in modern electrical appliances. Therefore, you can find sockets and plugs of type D only in an outdated housing stock.

Next type E - These are French sockets and plugs. They are more familiar to us with the exception of the pin in the socket located above the two standard connectors. This grounding, respectively, in the plug there is a special recess for grounding contact. You can meet such a performance of electrical outlets in France, Slovakia, Belgium and Tunisia. In addition, type E sockets are found in such famous countries of the world as Cameroon, Canary Islands, Madagascar, Morocco, Poland, Syria and the Czech Republic.

Sockets Type F widely used in Russia, Belarus, Ukraine and in Europe. This is the German standard that has gained the most popularity among domestic audiences. The reason is the ability to withstand currents up to 16A and convenient performance. The German standard can be found in such tourist countries as Austria, Bulgaria, Hungary, of course Germany, Greece, Georgia, Denmark, Spain, Iceland, Italy, Indonesia, Monaco, Netherlands, Portugal, Turkey, Croatia, Montenegro and others. So if you are in Bali, do not worry about the mismatch of the plugs and sockets. 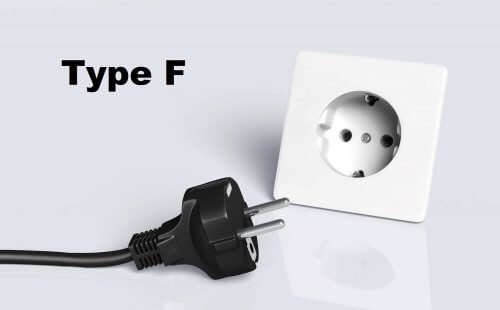 A type G - British sockets and plugs. In addition to the UK, they are widely used in Ireland, Malaysia, Singapore, Hong Kong, the Dominican Republic, Vietnam, and also in Cyprus. It is important to note that this standard is almost the only one used in the United Arab Emirates (UAE). Class G electric plugs not only have a specific appearance, but also have a fuse design, which is very unusual. So if you are, for example, in England, consider the last feature. 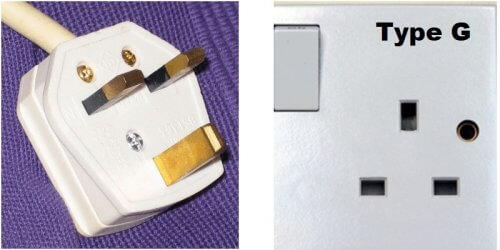 A type H quite rare and is used only in Israel, the photo shows how it looks:

Sockets and plugs type I slightly similar to the previous (H), but the connectors and pins are at a different angle. They can be found in China, Australia, Argentina and New Zealand. 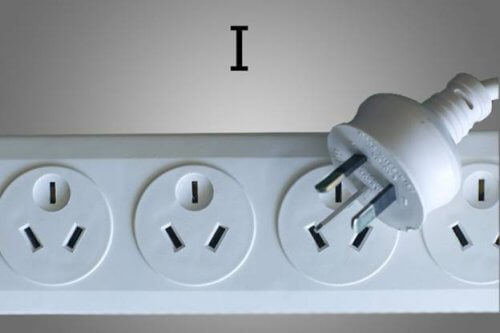 Next in alphabetical order are class sockets J, which are found in Switzerland and Liechtenstein, and then quite rarely. It is important to note that type C plugs can be connected to J sockets, however, on the contrary, connection is not possible due to the presence of a third pin.

A lot of people saw “smiling sockets” resembling a smiley face, and some even looked like a scream. Such cute devices are used in Madagascar, in Greenland, as well as in Denmark, they are assigned the letter K. Soviet-style plugs (type C) can plug into these joyful outlets. 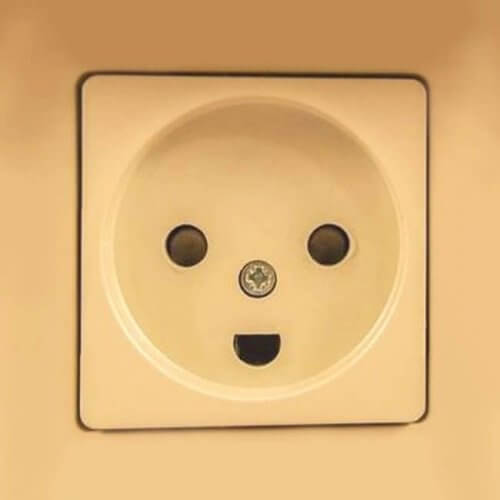 Sockets with connectors in a row are of type L. They can be found in Italy, North Africa, as well as in Uruguay and Chile. Type C thin pins can be plugged into these outlets. 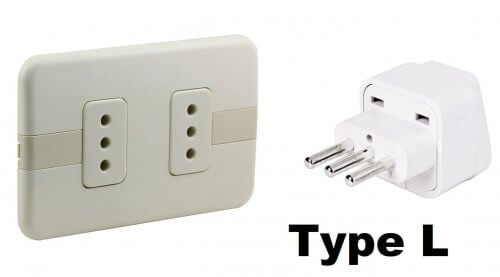 Very similar to standard D are sockets and plugs of type M. They are often found in countries such as Swaziland and Lesotho, as well as in South Africa. 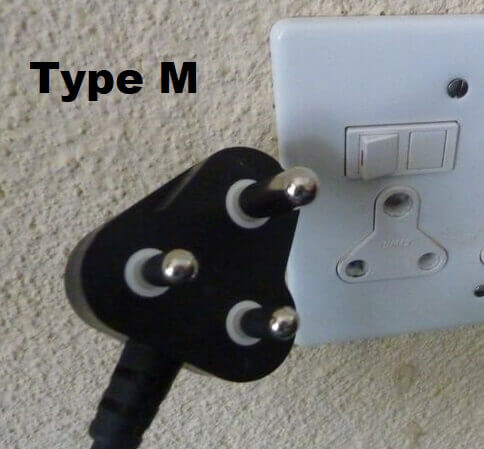 J-type sockets, which we have already talked about, look almost the same, and N. There is a slight difference in the distance from the central connector to the other two, however, the devices are not compatible with each other. Class N applied in Brazil, compatible with Class C forks.

Well, the last type of outlets that will be discussed in this article are O. You can find them in Thailand, compatible connectors with plugs C. 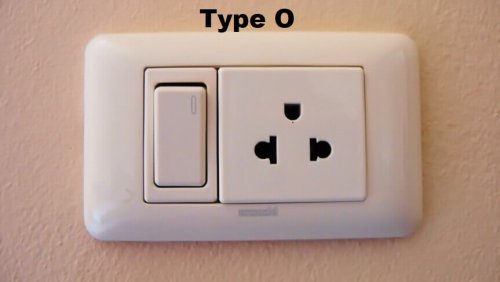 Important to know and understand

As we have already indicated above, in America, Canada, Japan, and some nearby countries, the voltage and frequency of alternating current differ from the usual 230 Volt 50 Hertz. And if you can solve the problem with the mismatch of the plug and socket, you can use the adapter, then connecting the equipment that is incompatible with the parameters of the "overseas" network, you will disable it. Well, if you do without injuries and emergencies.

That is why pay attention to the characteristics of electrical appliances that you intend to connect at the hotel, and compare them with the characteristics of the electrical network of the country where you decide to go. There are electrical appliances that can operate without additional transformers at a voltage of 100-240 volts. If this is not your case, purchase a special step-up / step-up transformer in advance and connect the equipment through it.

So we examined what types and types of electrical outlets are in different countries of the world. We hope that the provided photos and brief information helped you study this issue and find the right answer. If we missed a country, write in the comments, we will be happy to respond promptly!