Decoding of marking of electric motors of domestic and import

Electricians involved in the operation of electric motors manufactured by the USSR had no difficulty in deciphering the designations that were applied to the nameplate.Induction motors, according to GOST, had the designations A, A2, AO2, 4A, 4AM. Engines made in the countries of the Commonwealth bore excellent designations. For example, the marking of electric motors manufactured in Bulgaria was designated by MO instead of 4A, and 4AM as M. With the collapse of the USSR, manufacturing plants began to use their own designation, which makes it difficult for electricians to select engines for repair work. In this article, the marking of electric motors and their decoding will be considered.
Content:

Modern designation and interpretation of the parameters of electric motors

The following is a decoding of the designations of modern engines. 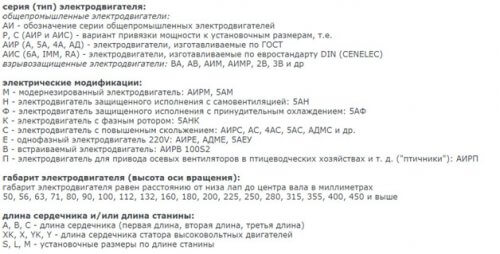 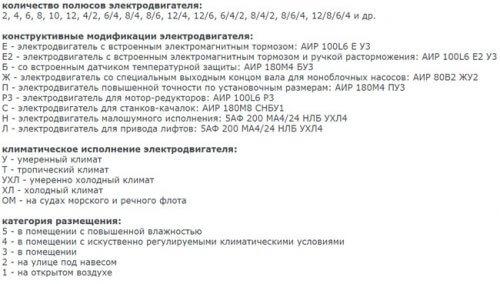 Below you see an example of a complete labeling of asynchronous motors and its decoding.

The degree of protection of the electric motor against dust and moisture according to IP class is also indicated, with numbers from 0 to 8. Here, the first digit is protection against dust, and the second is from moisture. 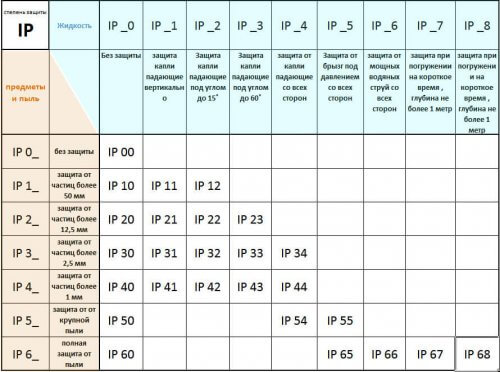 In this case, the name indicates the mounting version. According to the installation code, you can determine how the engines are mounted - on the feet or using a flange. For example, IM 1081 speaks about mounting on paws, and that it is possible to install the shaft up, down or horizontally. 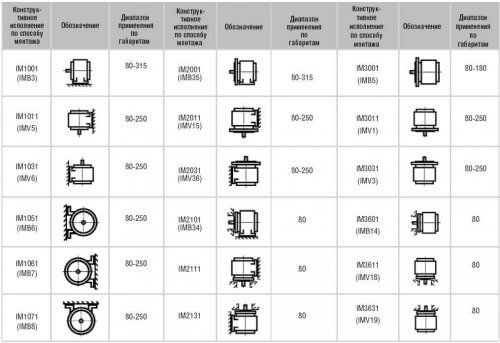 For an explosion-proof electric drive, the package of accompanying documents must have a certificate stating the marking according to the degree of explosion protection, its type and scope of application. Also, in engine markings, if the letter B is first indicated, it is explosion-proof, for example, VA07A (M) -450-710. 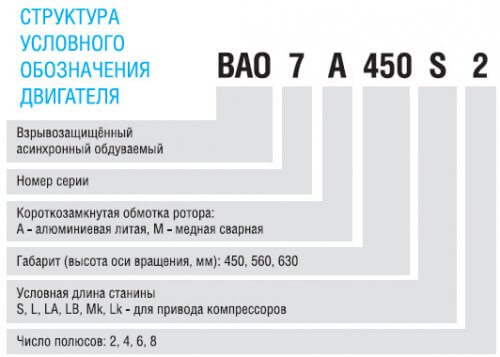 Moreover, the designation of DC motors is different from AC and has the form as shown in the figure. 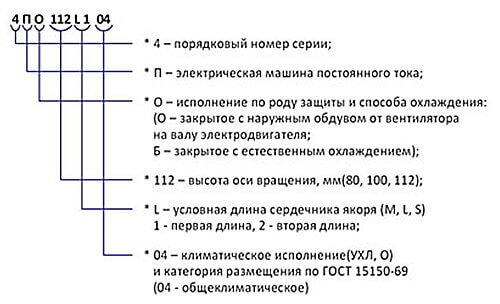 The figure below shows information on traction motors mounted on cranes.

Similar data are placed on the nameplates of electric motors. 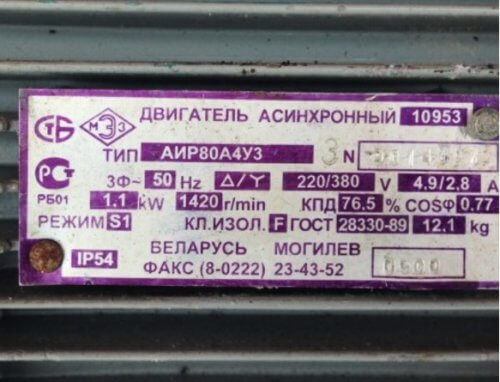 The information on the plate says that:

Power 1.1 kW, rotation speed 1420 rpm. It can work from alternating current voltage of 220 or 380 volts when turning on the windings triangle or star.

The current consumption will be 4.9 / 2.8A, respectively. Degree of protection IP54. Made in the Republic of Belarus.

Connection diagram and decoding of terminal designations in the box

There is a terminal box on the electric motor, it is also called "brno". Where the bolts fasten the findings of the beginning and end of the stator windings. 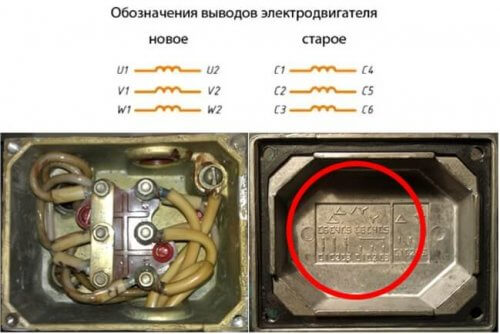 The figure above shows the box with the terminal marking, and the figure below shows the terminals of the windings, which, by bridging in a certain way, can be connected by a triangle or a star: 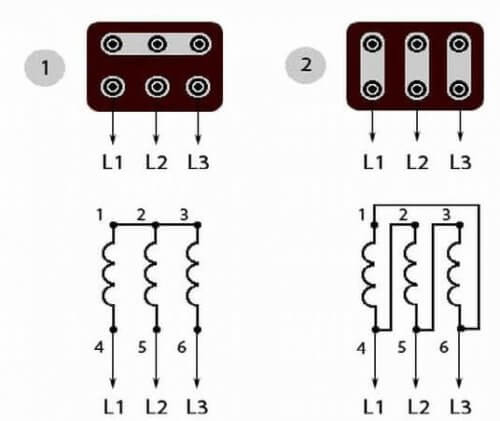 Imported motors use the same marking. 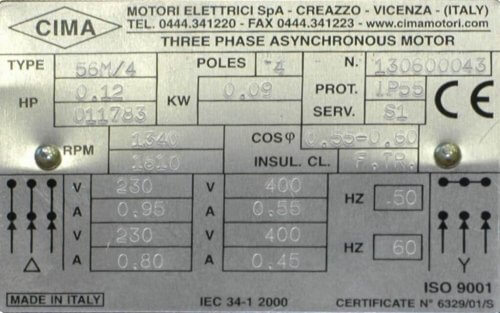 The figure shows the nameplate of an electric motor made in Italy. Where is the marking similar to domestic engines, but by European standards. According to these data, you can choose a domestic analogue.

The German company Siemens produces electric motors for various purposes. In this case, the designation on the nameplate shows the data for the standard voltage, but for different frequencies of the supply voltage. The figure below shows the decryption of the information from the Siemens engine nameplate. 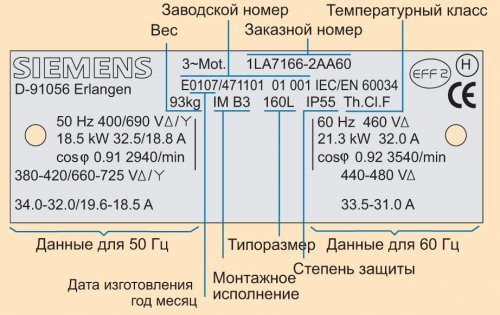 A similar marking of electric motors is placed on the nameplates of Chinese manufacturers. Often they produce products under well-known brands, such as the same Siemens.

Determination of engine parameters without a nameplate

If there is no plate on the engine, and there is no passport, the question arises of how to determine its power. There are several ways to do this:

This situation often arises in the workplace. Therefore, electricians must understand how to find out the power of engines in the absence of a nameplate.

We wrote about this in detail in a separate article published earlier -https://my.electricianexp.com/en/kak-opredelit-moshhnost-elektrodvigatelya.html.

Marking of brushless motors on the model has two indicators: stator dimensions diameter / height or external dimensions. They are indicated by a four-digit numerical value, for example, 2212. The first two digits determine the diameter, and the second - the length of the stator in millimeters. 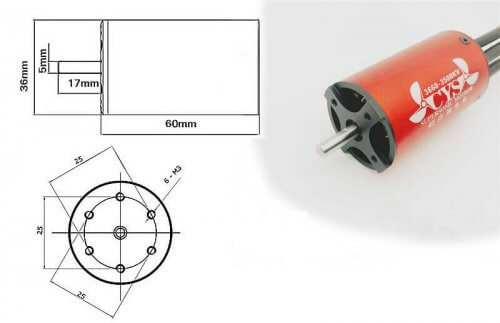 Please note that the dimensions are indicated not of the housing, but of the stator. The above motor type 2212 is outrunner in design, i.e. brushless motor with external rotor. The dimensions of its body will differ from 22 and 12 mm. 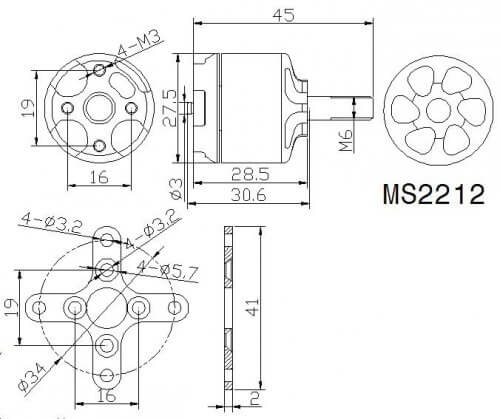 However, the external dimensions of the stator is a marketing move of sales managers, because there can be any winding in it.

So we examined what is the marking of electric motors and their decoding. If you have questions, ask them in the comments under the article!