Why does the circuit breaker trip?

The tripping of a circuit breaker can be caused by many different reasons, ranging from a malfunction of the product itself to a short circuit in the wiring. You can independently determine why the mechanism for disengaging the power is triggered, and doing this will not be at all difficult even for an inexperienced electrician. Next, we will tell the readers of the site electricianwhy the machine is knocked out in the shield and what to do to solve the problem!
Content:

The most common reason why the circuit breaker (AB) is tripped is that it simply did its job - it protected the wiring from overload and further failure. When we considered technical characteristics of machines, then it was said that each model has its own rated tripping current: 6, 10, 16, 25 A, etc. Now, if you simultaneously turned on several powerful electrical appliances whose current exceeded the set point, do not be surprised why the circuit breaker in the house knocks out. For example, you have a 16A automatic machine on the dashboard (a classic situation for old wiring) and at one point you turned on the washing machine, air conditioning, electric kettle and boiler. The load on the network increased markedly, as a result of which the AB disconnected, thereby protecting the wiring. 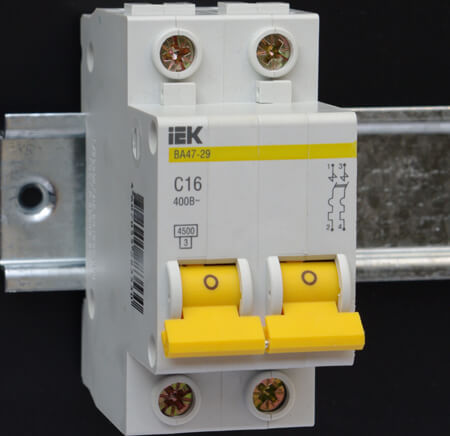 There are several ways to solve the problem. The first and simplest one is to turn on powerful household appliances in turn so that they do not arise overload. The second is to replace the machine with a 25-ampere. This is allowed to be done only if the wiring can withstand the load (copper, core section of at least 2.5 mm2) The third, most reliable - replace wiring in the house to a new one that will be able to withstand powerful household appliances.

The reason why the machine knocks out is clearly explained in the video:

What to do if an AB trips under load?

We draw your attention to the fact that after the machine knocks out, if it is with a thermal release, it will not work immediately. This is due to the principle of operation of the product. When the mechanism cools down (time may reach several minutes), try again to raise the lever to the "On" position.

If the machine knocks out often and approximately at the same time period, it is highly likely that one of the electrical appliances is faulty. For example, if you notice that the circuit breaker is activated when the washing machine, electric stove or water heater is turned on, turn off this technique and see how the device behaves without electrical appliances. Does the trip happen? It is necessary to look for a malfunction in one of the connected "culprits". About, how to repair home appliances do it yourself, we told in the appropriate section of the site.

You can quickly find a faulty technique using the exception method. Disconnect all plugs from outlets and plug in alternately. On a device that is short, the circuit breaker will trip under load.

If you disconnected all the equipment from the network, and the machine turns off, then it may be in the wiring. What to do in this case, we will describe further.

Another reason why AB is often knocked out is wiring short circuit. The phase in some place touches zero, as a result of which a short circuit occurs and the machine performs its second protective function - protection against short circuit. If all consumers are disconnected from the network, and the operation occurs, you need to completely check wiring. This takes a lot of time and, in addition, you need to be careful to find the fault.

First of all, you must disassemble all sockets and light switches, check the quality of the connection of conductors to the terminals. If the wires are loose, the screws must be tightened. After the outlets, go to the junction boxes. Make sure that junction box wires high-quality, there are no exposed areas that can be short. After the boxes you need to go to the lamps. Very often, novice electricians forget to check the chandeliers if the machine knocks out without load. The verification technology is similar to sockets - you check the reliability of connections. 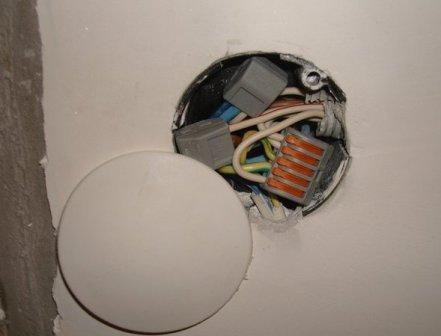 Last of all, you need to check the wiring, which in most houses and apartments is hidden (in the wall). In this case, it is best to use a special device that can quickly and accurately find a short circuit. However, at home, it is unlikely that someone will have it, so you can get out of the situation with a multimeter. About, how to determine a short circuit in the wiring, using the tester, we talked about in the corresponding article. If this does not help, we recommend calling the master, who, using a thermal imager or other devices, will find a short circuit and repair it.

Well, the most rare reason, which is also not excluded, is the poor quality of the machine, which is knocked out because it is defective. If you are sure that the wiring and household appliances are intact, and overload does not occur - check the machine by replacing it with a similar one. We can say with confidence that this will help to fix the problem. In order not to encounter such a case in the future, we recommend that you familiarize yourself with rated by the best manufacturers of circuit breakers and choose one from the list.

What else could be?

In addition to the above reasons why the machine is knocked out in the shield, there are others that rarely occur. Briefly consider them too.

If the circuit breaker operates when the bulb burns out, do not worry, this sometimes happens. The fact is that when the lamp burns out, a short-term overload occurs and if the rating is 6-10A, it will quite possibly knock out. With LED and fluorescent lamps this will not happen.


Sometimes on the forums you can meet a situation where the AV knocks out when the stabilizer is turned on. Here, too, their own nuances associated with the operation of the device and your carelessness. The fact is that voltage stabilizers at startup create a current that can exceed the rating of your machine, as a result of which it will knock out. There may also be a reason in the stabilizer itself. Cheap Chinese models are famous for their marriage.

If the operation occurs when the light is turned on - check the lamps with a multimeter. About, how to use a multimeterWe also told.

The banal reason why the machine is turned off is the incorrect connection of this device. If the cores are poorly pulled to the terminals, heating occurs in this place, as a result of which the thermal release can trip. Visual inspection will help determine the cause - a melted case and wire insulation. If the plastic has melted too much, it is better to replace the circuit breaker. In case of minor damage, it is allowed to simply tighten the cores with a screwdriver. 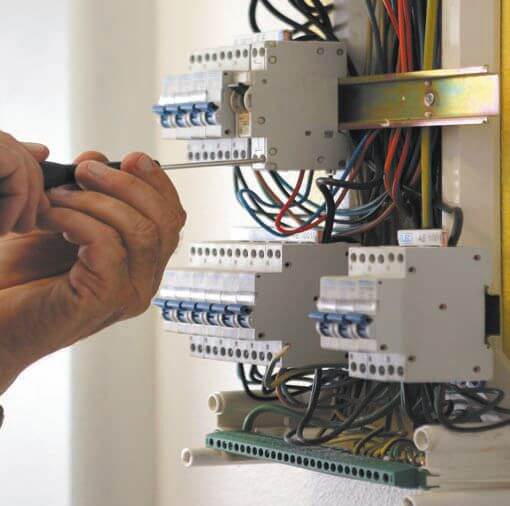 We move a little away from the topic, but nevertheless we note an important one. If you have introductory and group machines in your switchboard, it will be easier to find the reason. Knocks out AV on input, without group? Check for correctness. flap assembly. If a certain automatic machine is switched off below the main one, it means that in this group there is a malfunction (lighting, sockets or a separately connected hob).

It happens that the problem occurs after flooding the apartment. Water gets on the connection of the wires and if they are twisted with electrical tape, it sticks up, resulting in the closure of the contacts. After the flood, it is necessary to make an audit of the wiring so as not to reach the situation when the circuit breaker starts to operate.

So we have provided all the reasons why the machine is knocked out in the shield. Please note that this situation can occur both in the apartment and in the private sector. You need to act in the same way, even if the circuit breaker on the pole opens! If you are not confident in your abilities, it is better to call a wizard who will safely find the malfunction and fix it!