What is a circuit breaker and what is it for?

Today at electrical wiring it is impossible to do without protective devices. In any switchboard, an introductory automatic machine and several additional ones for lighting, sockets and other groups of wires must be installed. Next, we will consider the device, purpose and principle of operation of the circuit breaker.
Content:

First of all, we will understand what a circuit breaker (AB) is. The machine is a protective device that cuts off electricity in a certain section of the wiring for the following reasons:

In addition, this device can be used to “relieve” voltage on a specific section of the wiring by means of an operative shutdown (the event is extremely rare).In simple words, the purpose of a circuit breaker is to protect electrical appliances when wiring fails.

As for the scope of automatic machines, it is possible both in domestic conditions (protection of houses and apartments), and in industrial enterprises. Circuit breakers are used in all areas of the electric power industry.

To your attention, a video lesson in which there is a full explanation of what a circuit breaker is and what is its operating principle:

Today, there are many different products to turn off the current in the network. Each of the devices has its own specific design, so in this article we will consider an example with a modular machine.

So, the circuit breaker device consists of four main parts:

We also bring to your attention a more detailed design of the circuit breaker:

In this video example, the design and principle of operation of the machine are clearly provided:

Detailed principle of operation
Continuing the conversation about the design, I would like to talk about the EKF machines. Devices in the Averes line are equipped with a window of the actual state of contacts, an instant switching mechanism (when switching occurs even before the lever is fully cocked) and protective shutters on the terminals. Warranty for machines - 10 years. In the PROxima line, vending machines have contact status indicators and a panel for sealing terminals. Warranty - 7 years. The reliable construction and molded front panel make the housings of these circuit breakers more durable.

Any circuit breaker has its own individual characteristics, by which we select the appropriate model. 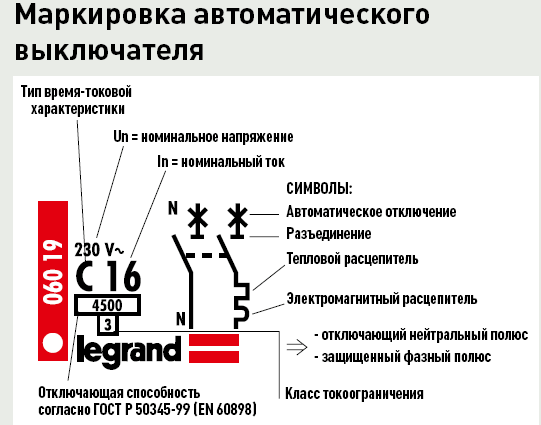 The main technical characteristics of the circuit breaker are:

I would also like to provide you with the most generalized classification of circuit breakers for the home. Today, products are usually divided according to the following criteria:

Also, products can be classified by IP degree of protection, amperage, short-circuit current limit and method of connecting wires.

That's all you need to know about the device, the principle of operation and the purpose of the circuit breakers. We hope that the information has become useful to you and now you know how the machine works, what it consists of and what it is for.