What is touch voltage and what determines its magnitude

An electric current does a lot of useful work and the life of a modern person is impossible without it, however, in addition to benefits, it can bring harm. An electric shock can lead to pain, burns, and even death. Electrical safety is a very extensive topic, which is considered by more than one publication. In this article, we will talk about what touch voltage is and what is meant by it.
Content:

Definition of a concept

When a person or animal touches bare exposed live parts, the body of the device, which for some reason is under potential, a cable with damaged insulation, etc., while standing on the ground, the potential difference between the point of contact and the ground is called voltage touch. 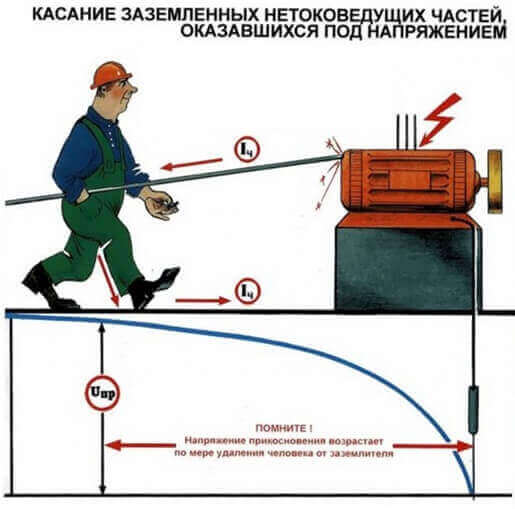 In other words, this is the voltage under which there are two bare conductive parts not connected to each other.

The conditions of occurrence are as follows - the housings of electrical appliances are usually grounded, but damage to the insulation of electrical equipment inside these housings causes the appearance of touch voltage when you grab the metal part of the case and the metal parts connected with it.

To begin with, what exactly is dangerous? The voltage itself is not particularly dangerous. Destructive and dangerous effects are caused by electric current. However, the probability of getting an electric shock depends on the magnitude of the voltage. AC voltage of 42 Volts is considered safe, previously considered 36 V. It is used to equip portable lamps and to power an electric tool, when working in hard-to-reach places, in garages, basements, damp rooms, as well as in places of temporary work. But stress touch and safe stress for a person are slightly different things.

The effect of electric current on a person is fatal, it can cause fibrillation of the heart and death, therefore, the values ​​of permissible voltages and currents are prescribed in regulatory documents. According to the standards described in GOST 12.1.038-82, the touch voltage under normal conditions (without accidents) should not be more:

These are the maximum permissible values ​​when exposed to up to 10 minutes per day. It is worth noting that for people who work at temperatures greater than 25 ° C and relative humidity more than 75%, these values ​​are reduced by 3 times.

Since the touch voltage is measured between the position of a person on the ground (his contact with a conductive surface) and the place of contact of electrical equipment, it follows that it depends on the location in the room, more precisely relative to the ground point.The farther you stand at the moment when you touch a dangerous device on whose case the potential is (from the ground point), the greater the magnitude of the touch voltage. 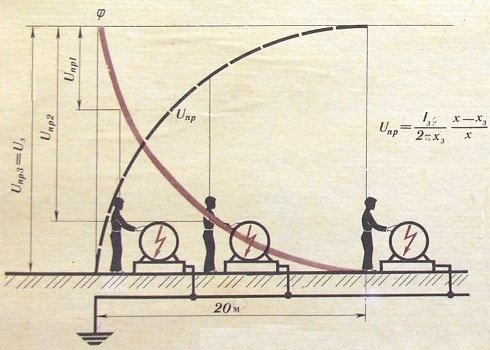 It is worth noting a few more definitions: 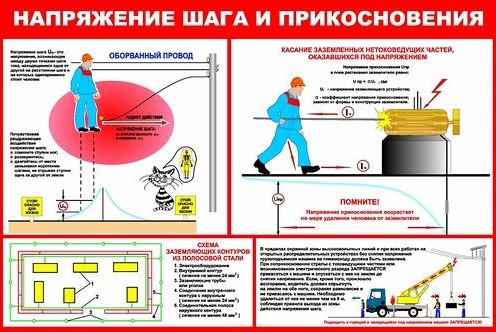 You should have noticed that the touch voltage, the spreading zone and the step voltage are interconnected.

Let's see how to protect yourself from touch stress. To reduce the risk of potential on the housings of electrical appliances, it is necessary, firstly, to ensure reliable grounding. Moreover transition contact resistance earthing switch (metal connection) should not exceed 0.01 Ohm. The connection should be securely bolted or welded, it should be checked regularly.

Secondly - before turning on the devices after a long period of inactivity and generally old ones (more than 10 years), it is necessary to check the quality of insulation of wires and cables, for this they use a megohmmeter. Tentatively, the insulation resistance should be at the level of 1 megohms (megaohm) per 1 kV. For a 220-380 Volt power supply, 0.5 MΩ is enough.

To reduce the possibility of electric shock, it is necessary to install RCD or difavtomat. Their purpose is to protect people from electric shock. But here you need a grounding system TN-C-S or TN-S, that is, the network must have separate PE and N wires, but not the combined neutral wire. It is necessary to fulfill the protection requirements, otherwise the RCD will not correctly perform its tasks.

In networks with isolated neutral, the touch voltage is calculated by the formula:

The full formula, taking into account all the resistance (touch, spreading zone), is as follows:

Where a1 – contact coefficient U, it is affected by the shape of the potential drop curve, a2 - coefficient of touch, takes into account the resistance to spreading over the area on which the person stands, shoes, isolation of the phase from the ground.

In networks with a grounded neutral, when a person is exposed to a voltage lower than the linear (with a linear 380V, phase equal to 220V) current flowing through the human body, it is limited by the resistance of the shoe, floor (earth) and body.

With the introduction and scheduled checks of the state of electrical installations, the voltage of the touch is measured, let's find out about the measurement procedure. First, disconnect the neutral wire from the electrical panel. Then measure the resistance with a milliometer or grounding meter, type MRU-101.Then, a circuit is assembled where, at a distance of at least 25 m from the ground electrode (figure 2 in the figure), a pin is installed to a depth of 25-30 cm and an electrode similar to a person’s foot (indicated by number 3 in the figure). Between the ground electrode and the pin, voltage V1 is applied. Voltmeter V2 - touch voltage. At the same time, a 1000 Ohm resistor (simulating the resistance of the human body) and a disconnector (when it is closed, a measurement is performed) is installed. 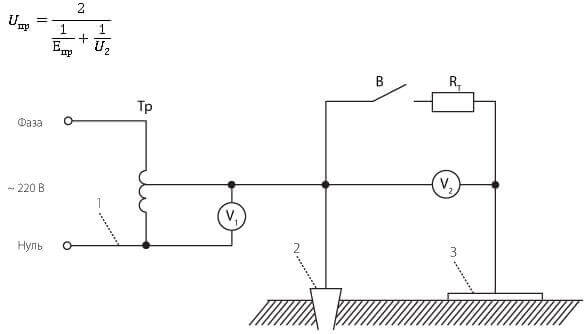 This is what an electrode looks like that imitates a person’s foot: 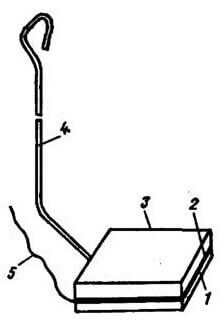 Where 1 is a cloth gasket (wet), 2 is a copper conductive plate, 3 is a dielectric, 4 is a handle, 5 is a wire connected to the meter.

Another method is called the “voltmeter-ammeter method”. In figure R2 - the resistance of the body: 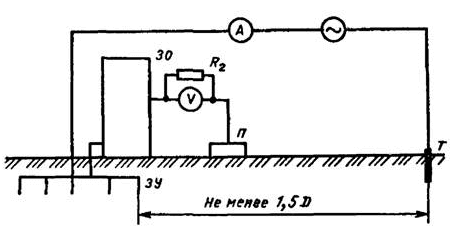 The video below demonstrates a special device for measuring touch voltage:

What is dangerous voltage touch? You can be shocked, because the potential of the power supply network is located on the surface of the device. Household appliances powered by 220, such as an electric stove, are dangerous, and industrial networks of 380 volts and difficult working conditions only exacerbate the influence of touch voltage on a person. In order to avoid damage, in addition to preventive measures in the electrical network, you need to have a minimum set of personal protective equipment, for example dielectric gloves and boots when working in electrical installations and to comply with all protective measures prescribed in regulatory documents and company regulations.