What are the types of LED lamps for the home

Currently, types of lighting devices in the market of electrical goods are presented in a wide assortment. These include: incandescent, fluorescent, halogen and LED lamps. The latter have gained popularity in the market and are used in almost all houses and apartments. In this article, we will consider and tell what types of LED lamps are.
Content:

30 years ago, the first blue LED was invented. It gave a dim cold light, not suitable for lighting. Thanks to the development of scientists, now LED equipment is used in various fields of economy. 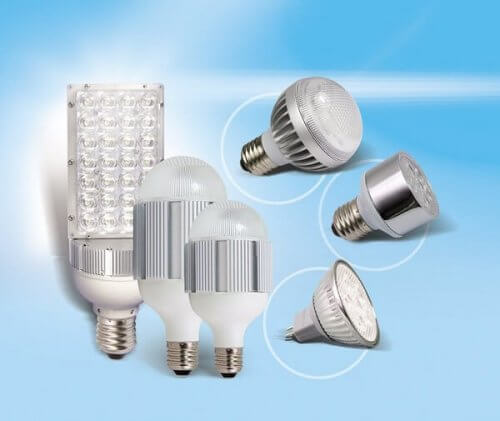 LED-luminaires have no analogues in energy efficiency and environmental safety. Despite the various types of execution, in general, the device of diode lighting devices is the same. 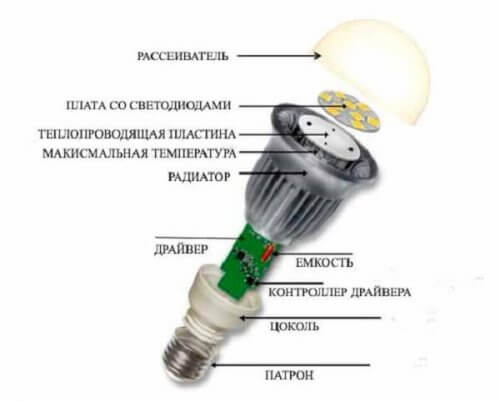 The classification of LED lamps can be done by:

We will briefly review each item.

LED light sources are divided into those used in lighting:

The LED lamp can be a general-purpose device, a directional light source, a linear light source (diffused).

General-purpose LED sources resemble incandescent lamps, candles, and corn in shape. Modern lamps from good manufacturers have high-quality diffused light and can be used for residential buildings and office buildings. An ordinary LED lamp is suitable for replacing an incandescent lamp in a lamp, but adjust its brightness with dimmer switch will not work. 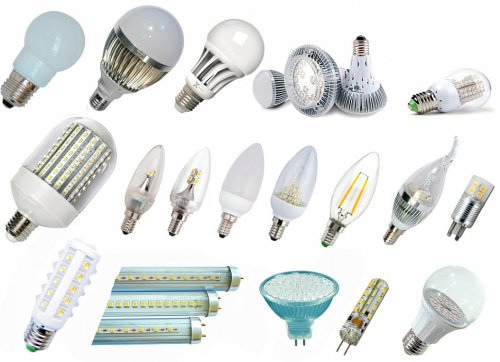 The next constructive variety is the directional light sources used in window dressing and squares. By design, these are spotlights or, as they are also called spots, they can be equipped with dimmers - dimmers. 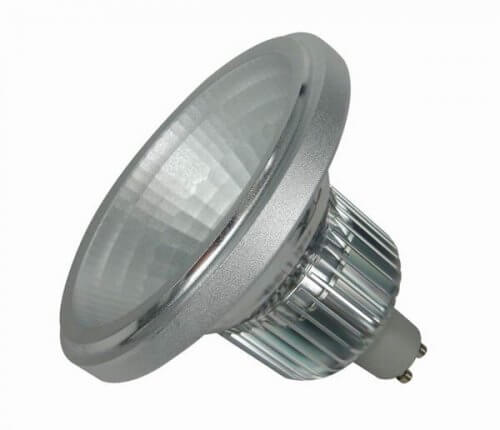 In offices, they are very in demand - linear LED-lamps or lamps. They are often used to replace fluorescent tube lamps in offices and trading floors of large areas.

We figured out the types of designs of the bulb, now let's talk about what LED lamps look like in the basement. 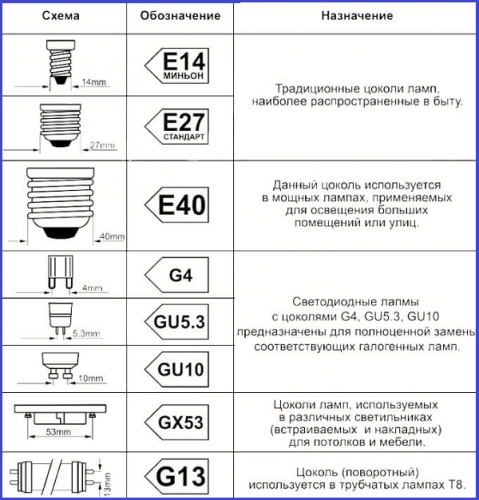 With the base E27, E14, both the most ordinary and LED bulbs can be produced. The designation "E" in the marking comes from the first letter of the name of Edison, who created this threaded connection.The numbers after the letter are the diameter of the cap in millimeters.

E27 is the most common type of cap. The LED bulb with the E14 cap is called the minion and is used in small lamps: sconces, floor lamps, table and bedside lamps.

The GU10 base is equipped with a two-pin connector, the ends of which have bulges that serve for rotary fastening in the cartridge. They are used for spotlights. The letter G in the marking means that the base housing with pins, the number 10 - the distance between them, and U - that there are bulges at their ends. They are used both for lamps with a supply voltage of 220V and with 12V DC. 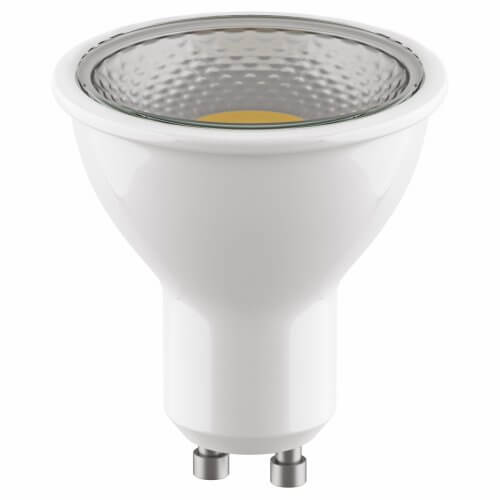 Recently, a wide variety of pin-type GU5.3 socles has become widespread, as the previous one is often used in spotlights in plasterboard ceilings. The gap between the pins is 5.3 mm, which completely coincides with the distance between the holes in the cartridge for this socle. More often they connect to a network with a voltage of 220 V, but there are also 12V. 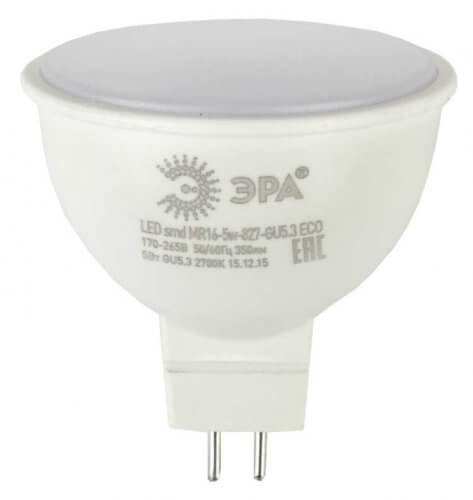 LED lamps with a G4 pin socket are most often designed for connection to a voltage of 12 V DC. This miniature light source is used in spotlights, for interior lighting of rooms, in landscape design. The intensity of the light flux of such and other low-voltage lamps can be regulated by any 12-24V dimmer (those that are used for LED strips are suitable). 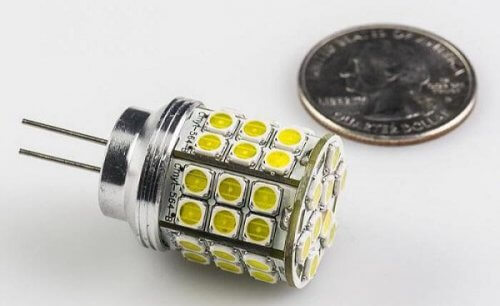 LED lamp with pin socket G13 - a kind of linear lighting device in the form of a tube. It is used in large areas, offices, public places, garages and in production. It can be marked as T8. They use in fixtures instead of luminescent. The distance between the base pins is 13 mm. This is a complete analogue of fluorescent lamps.

To turn it on, it is enough to apply a voltage of 220 V to the opposite pins of the base, and no ballasts are required, which is an absolute plus.

To each of the cartridges connect one wire. It does not matter which one will be connected to the phase conductor, and which to the neutral conductor.

A tube-shaped LED lamp can be produced in lengths corresponding to standard sizes of fluorescent sources: 60 cm, 90 cm, 120 cm. This makes it possible to use existing fluorescent lamps, replacing them with LED lamps of a suitable size. 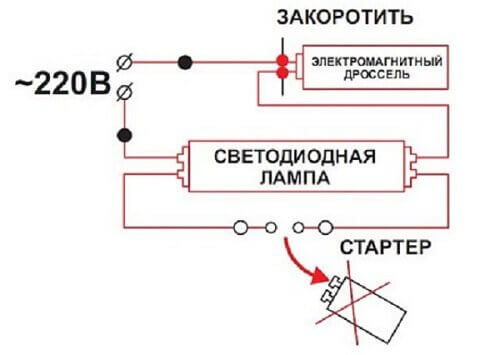 In this case, you need to remove the starter and capacitor from the network block, and throttle short circuit.

According to the LEDs used

There is a difference in the type of LEDs, they can be:

Indicator LEDs were used in first-generation light sources. Due to its low characteristics, such a variety is currently almost never used. 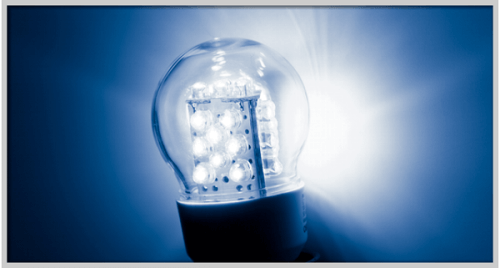 LED devices based on SMD diodes are the most common. The development of technology has allowed us to make more powerful chips while maintaining small sizes. And the next stage of the LED bulbs were the so-called "corn."

In lamps with a diode power of 1, 3 and 5 W, it has not yet been possible to achieve good heat dissipation for a small housing. In the process, these devices heat up significantly, so the case they have is a metal radiator.

COB diodes are a relatively new technology. Diodes are mounted directly on the board, which increases the reliability of the source and improves heat dissipation. Then, a common phosphor layer is applied to the crystals. This increases the uniformity of the light flux. But more often they are used in searchlights and powerful lamps, less often in light bulbs (see the illustration with "corn") 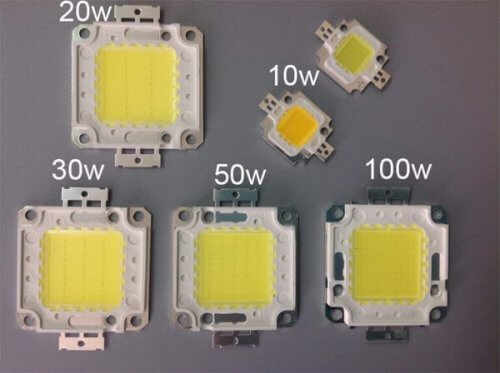 Around 2013, lighting devices with filament LED strands appeared, providing: 360-degree uniform illumination, good heat dissipation, low cost.On average, the power of one filament is 1 W, and the voltage is from 60 volts. 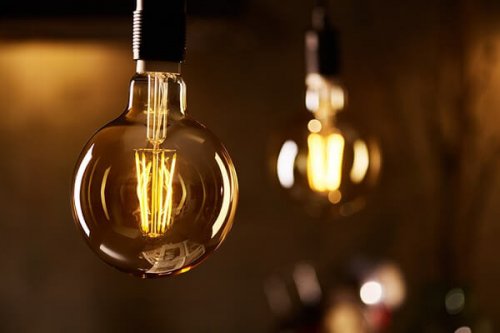 The shape of the flask

For home interiors, pear-shaped, spherical lighting elements and candle-shaped sources are most popular. Pear-shaped are marked with the letter - A, spherical - G, candles - C. The numbers correspond to the diameter. There are many other forms, each of which is designed to perform certain functions. 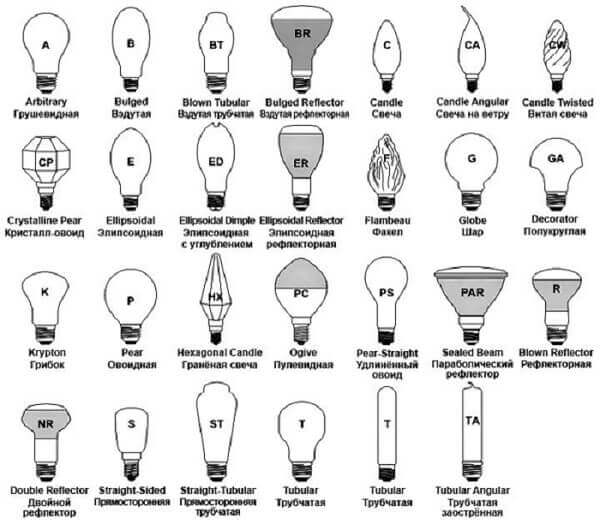 Ability to change brightness or dimming

To smoothly change the lighting in the room, use a special regulator - a dimmer. But not all types of LED lamps work with this device. For example, the use of conventional LED sources will disable the system. For this purpose should be used dimmable LED lamps. 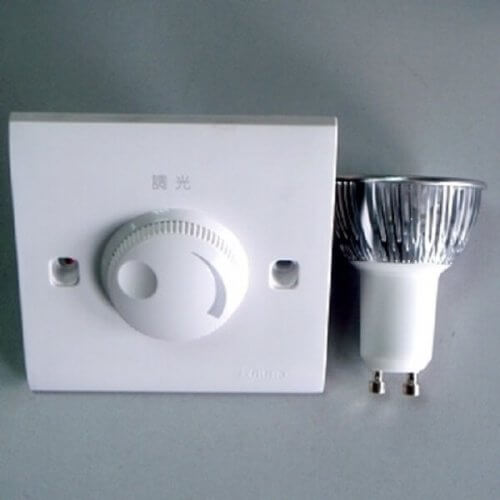 Externally, it will not be possible to distinguish a conventional bulb from a dimmable one. They look the same. Improved should be with the inscription "dimmable" or with the corresponding logo. 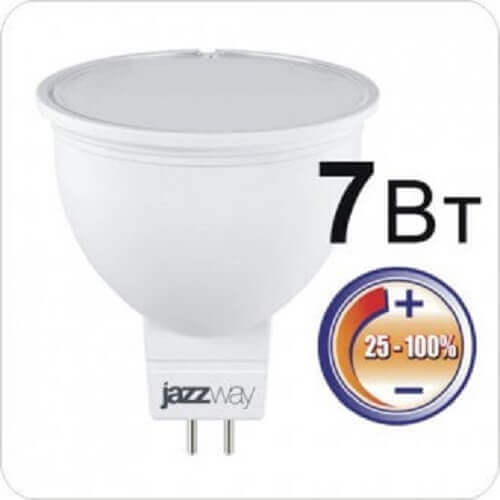 Suitable for places of short stay of people - corridors, porches, near the entrance doors and more. Most often they use infrared (PIR) sensors as motion sensors.

The principle of operation of the sensor is to monitor changes in the temperature picture in its field of vision. When you enter the room, the heat of your body changes the thermal picture and the sensor is triggered when you stand still or leave the sensor’s field of view, it will turn off. It works only on changing the environment, and not on the presence of a person in it. 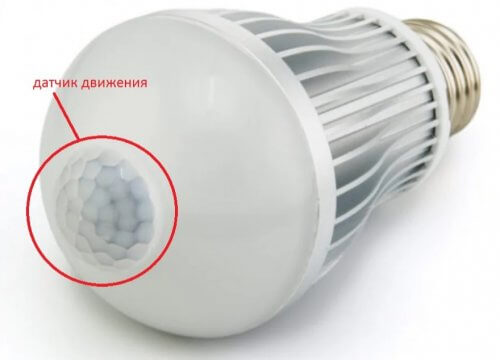 So we found out what types of LED lamps exist. Which ones are best for you, decide for yourself. Set up your stay correctly and comfortably.