How to connect sockets: in series or in parallel

All sockets in the house or apartment are connected to the main panel, where circuit breakers are installed, which, in case of a dangerous situation, turn off, sometimes even at the most inopportune moment. The initiator of their operation is sometimes the wrong scheme for connecting outlets to each other or outputting them to one power cable. Proper connection of outlets ensures uninterrupted and safe operation of household appliances. In this article we will look at how to connect the sockets in different cases and which circuits are considered correct.

During wiring, it is important to choose the correct connection diagram for several outlets. There are three methods in total:

The concepts “sequential” and “parallel” are conditional in this context, and they do not need to be understood in the classical sense of the connections of elements of electrical circuits.

The above methods can be supplemented with a ring connection, when all the sockets of the apartment or in the house are powered from one wire. Such a scheme may include all three connection options. Each of them has its pros and cons. When choosing a connection method, it must be taken into account that the electrical connection is vulnerable at the twist points. At the same time, increasing the number of junction boxes reduces the life of the wiring.

Let's consider each circuit of connection of sockets in more detail.

A loopback connection involves the serial connection of several outlets in a row among themselves. The connection is made without a junction box, since the fixation of the cores is performed on the contacts of the sockets in the socket. The phase and the zero core are brought to the main outlet. From it depart wires to other points. 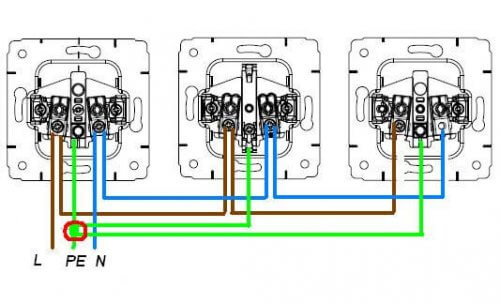 This method is used when it is necessary to combine the sockets into a single unit. But such a scheme is not suitable for connecting power devices, such as electric and microwave ovens, washing machines, air conditioners. If the load is exceeded, the contacts may burn out. And if the wire burns out in the first outlet - those connected after it will not work.

It is also important to note that the ground wire must not be started with a cable, it must be connected to each point, as shown in the diagram above. 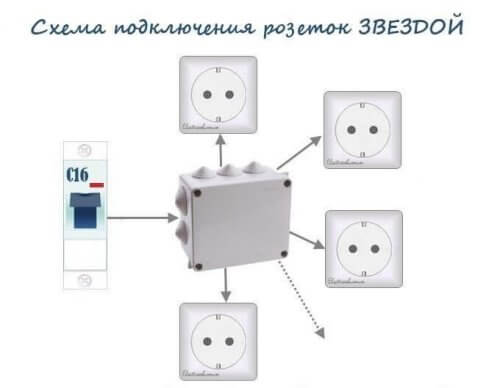 An important advantage of this method is the autonomy of the outlet, that is, independence from the state of others. If one of the outlets fails, then the rest continue to function further. But if the main cable burns out, then the voltage disappears in everyone. However, in such cases it is always reliably known where to look for a cliff.

Another drawback of such a connection scheme (in parallel) is the increased consumption of wiring. To connect each outlet, you need to pull a separate line, which increases electrical installation costs.

Mixed connection helps to increase the reliability of the outlet circuit. Often this method is used when mounting points using a loop method. The essence of the method is to install a junction box to which a power cable is supplied. Then wiring for each outlet in the room. Branches are made from it to the remaining points, which are located between the box and the far connection point.

The mixed connection provides reliability since the circuit includes independent power points. In the event of failure of one of them, the remaining sockets do not lose voltage and continue to function. Finding a cliff is also not difficult, since the electrical points are connected independently of each other.

The connection of sockets with a ring is an unusual scheme, since it is rarely used. But this method has its own advantages. The meaning of the wiring is to lay the main power cable around the perimeter of the room. The wiring exits the switchboard and enters the other end. 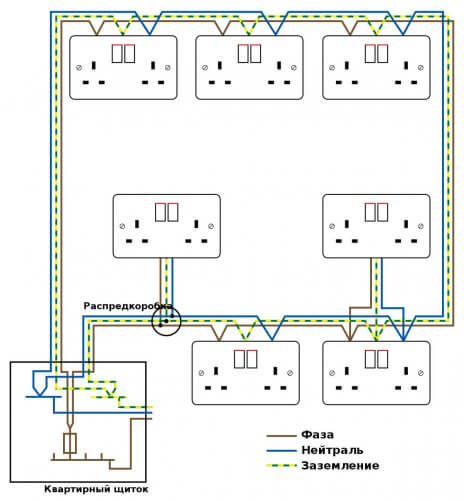 The joints for branching into separate rooms are made in junction boxes. The connection is performed by a train or by the type of a star.

The cross section of the main cable is selected from the calculation of the total load of the room when several devices are turned on simultaneously in each room. A ring connection is not inferior in reliability to a parallel connection, since the circuit maintains autonomy of the points.

The choice of the method of connecting the sockets is always due to the power of the connected electrical equipment and the cost of installation work. A separate circuit provides reliable and uninterrupted supply of voltage to all devices. However, this method is the most costly since it requires more cable. But it is the star connection that guarantees the independent operation of all points.

It is also important to consider that when connecting the sockets in series, the total load should not exceed the maximum current of the socket. And he, in most cases, does not exceed 16A (3.5 kW). Those. If you are going to install a block of 3 outlets and connect them in series, it is strictly forbidden to simultaneously include a load of more than 16A in each of these outlets (this situation is relevant in the kitchen). At the same time, if you decide to connect the sockets with a star, a load of up to 16A can be connected to each of them. The main thing is for the cable to withstand the machine that is installed on this outlet line.