How to remove insulation from wire and power cable?

For any wire connection method initially it is necessary to strip the contacts by 8-10 mm. Sometimes such an event takes a lot of time and nerves, especially if the veins are represented by thin copper hairs. To readersElecroExpert"Could quickly carry out electrical work, then we will provide the simplest methods, as well as a tool for stripping wires and cables!
Content:

Which tool to use?

The easiest way is to remove the insulation from the wire with a conventional knife. In this case, the upper protective layer is removed by longitudinal cuts, and the shell of the contacts is cut in a circle, slightly piercing the blade inward. In this case, you will not spend much time on such an activity, but there is a risk of damaging the conductor, especially if the turns are thin. 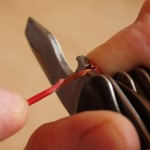 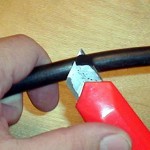 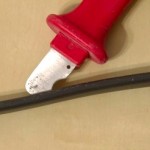 If you decide to use a knife, then it is advisable to use a special one whose blade is slightly curved for the convenience of stripping. Pay attention to the handle, it must be made of a material that does not conduct current.

Experienced electricians are advised to remove the insulation of the wire with a knife according to the following technology:

That is the whole essence of the work. As you can see, there is nothing complicated, but there is a high probability of damage to the contact, which makes this method not very effective.

Video: how to use an electrician's knife

About, how to make an electrician's knife with your own hands We talked in a separate article. Step-by-step instructions with photo examples explain the whole essence of the work!

The second way to remove insulation from the wire and power cable is to use a soldering iron. In this case, the tip is heated to the required temperature, after which you, by analogy with the previous option, remove the shell (scroll the conductor with your finger, leaning the soldering iron against the insulation). As a result, the extra piece of the shell is easily separated from the rest. The disadvantage of this method is that when the material comes in contact with a heated sting, an unpleasant odor will go around the room. In addition, a soldering iron is not recommended if the shell is rubber.

By the way, another tool can be used in the same way - the so-called “roasting”. When using it, you will hear the same unpleasant odor, so you need to use it only in extreme cases. 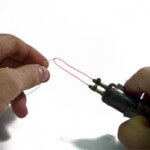 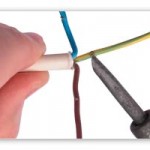 There are also universal tools for stripping wires and cables, called manual strippers. Such products are more functional, because allow manual adjustment of the diameter of the cores, so that when cutting does not damage them. Using strippers is quite simple - fix the desired contact and scroll along the guide arrow one revolution (as shown in the photo).

There are also special strippers on the market in order to remove the insulation from cross-linked polyethylene without burning it. Such tools have a high price (over 6000) and are used for industrial purposes, so we will not dwell on their review in detail.

Video review of a professional puller:

How to remove the insulation of the wire from cross-linked polyethylene?

Well, the last, best-rated electrician method is to use a tool called a stripper. This device is designed specifically for automatic stripping of wires. The design provides not only a section regulator, but also special nippers, as well as a crimper (used for crimping tips). Using a stripper is not difficult: the cable is fixed in the clamping jaws, the handle is compressed and expanded. The result is a quickly exposed vein without damage. It can be used to remove insulating material from the most popular types of conductors: VVG, PVA, NYM and many others. 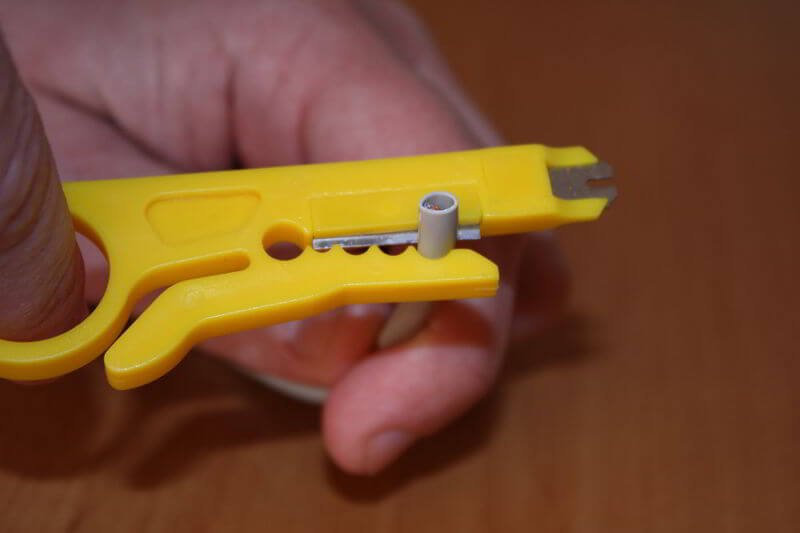 In fact, if you have already decided to engage in electrical work, then be sure to buy a stripper. The cost of the model for amateurs does not exceed 1000 (usually 300-500).

At the same time, the advantages of the tool are as follows:

Continuing the topic, I would like to talk about the strippers of the company EKF. At their optimal price (from 400 to 750), strippers are made of high-quality materials, equipped with a dielectric coating, as well as convenient handles. The Basic series is suitable for domestic wiring, the PROxima series is for professionals. EKF strippers can be used for stripping insulation from wires with a cross-section of 0.75 ... 6 (mm²), which is quite enough for electrical work in homes and apartments.

As you can see, this device has a lot of advantages and absolutely no drawbacks, compared to alternative options. That is why we recommend that you choose a stripper to strip the wires and cut the cable. This tool has many positive reviews on thematic forums from experts in the field of electronics.

In the field, many electricians use their own teeth in order to remove the protective shell. We draw your attention to the fact that this method is quite dangerous for tooth enamel, so using it is highly not recommended! If possible, take a pair of pliers or side cutters, they should always be at hand with an electrician!

We also recommend that you watch a video that shows how each of the wire stripping tools works:

Video review of the use of all tools

Above, we told you about what are the tools for stripping the wire and how to use them correctly. Now I would like to pay attention to the rules for the removal of the most popular insulation materials.

So, when removing the outer shell, we recommend that you consider the following tips:

Workshop on removing the entire sheath from an aluminum wire

We hope that now you know what tools are available for stripping wires and cables. Finally, we draw your attention to the fact that stripping the outer sheath of wires under voltage is strictly prohibited by GOST rules, whatever you use in this case!

Video: how to use an electrician's knife
Stripper's clear advantage over knife and pliers
Video review of the use of all tools
How to remove the insulation of the wire from cross-linked polyethylene?
Workshop on removing the entire sheath from an aluminum wire
Posted: 18.11.2014 Updated: 22.07.2019 no comments yet