How to make a do-it-yourself surge protector

Connecting a computer and peripherals to an electrical outlet usually requires a large number of outlets. At the same time, the operation of the power supply unit of the computer, monitor, audio system and other devices is of a pulsed nature. Such consumers can spoil the quality of the power supply network, saturating it with unnecessary harmonics, which can interfere with the operation of other devices connected to it. Particularly sensitive to the quality of the supply network are televisions, monitors, mobile phone chargers and computers. In addition to interference, surges and voltages can occur in the network, which can also damage expensive equipment. To solve all these problems, it is recommended to connect devices through network filter. However, its cost can seriously hit the pocket, especially if you need to purchase several devices in different places, so home craftsmen are interested in the question of whether it is possible to assemble it yourself. In this article, we will just tell the readers of the site https://my.electricianexp.com/enhow to make a do-it-yourself surge protector and what materials will be needed for this.
Content:

The device resembles in appearance an extension cord with an off button, this is partly true, but in addition to the shoe with sockets, filter elements are additionally located. They are just needed to protect against power surgesfiltering interference and parasitic harmonics.

In the simplest network filter, only varistor. This is a semiconductor device that, when a certain voltage is exceeded, turns into a resistor, goes into a short circuit. As a result of this, the circuit breaker installed in your home may trip, or if the pulse is short, then its energy will be dissipated by the varistor in the form of heat. This element is used in surge protectors and power supplies to protect against high voltage surges. Depending on the type of varistor, it can suppress pulses of different sizes. 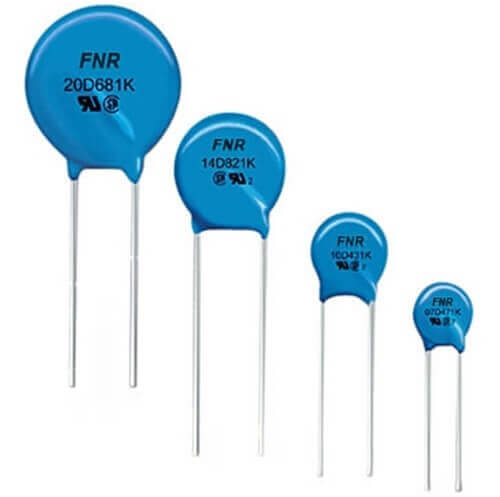 Such an embodiment on the varistor is the cheapest, however, in addition to voltage surges, it does not protect and does not filter from anything. Interference continues to ooz into the network and interfere with the surrounding and powered equipment.

For filtering high-frequency harmonics, L, LC and RLC filters are widely used, which can also be installed in a line filter.

In addition to such options, there are also models where the power cord passes through a ferrite ring, or makes a couple of turns around it. In fact, this is another L (inductive) element that is needed to filter the high-frequency component of the interference.

The simplest filter circuit consists of a switch and a varistor, here is what it looks like:

V1 - this is the varistor, its marking is “471”, which means that its operating voltage is 470V, and the larger its diameter, the more energy it can absorb without exploding.Thus, the larger the varistor you supply, the better, if only it fits in dimensions. Here is an example of a surge protector assembled according to this scheme, but in the factory version. This is a cheap device that dampens only high voltage pulses. At the same time, it can irreparably fail if there is a particularly strong surge. 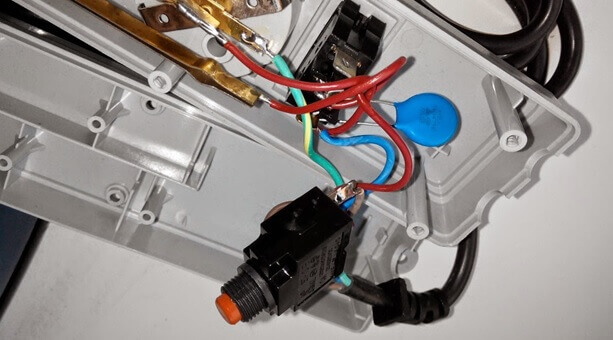 In order for your line filter to really be a noise filter, you need to add another filter element - a choke.

Schemes are, of course, good, but how to make a surge protector from improvised means? Simple enough! Almost always, an amateur has something to do, you can find an old unnecessary or inoperative power supply, it has such a filter at the input. It remains only to dissolve it. In the photo, he stands in the corner of the board closest to us. This part is a ferrite core and a copper lacquered wire wound around it. 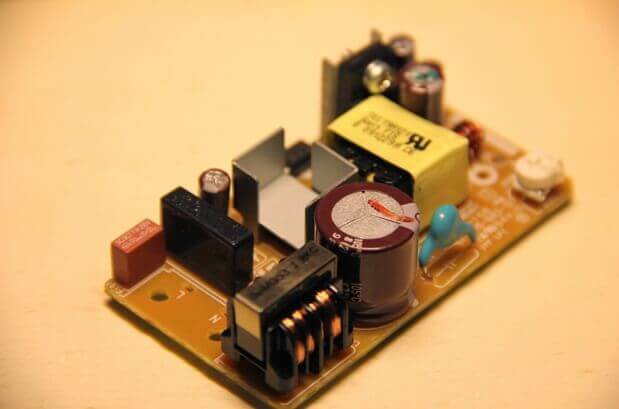 This is a choke with two windings, a phase passes through one of them and zero through the other, so the inductance is part of the line filter and reduces the level of interference. 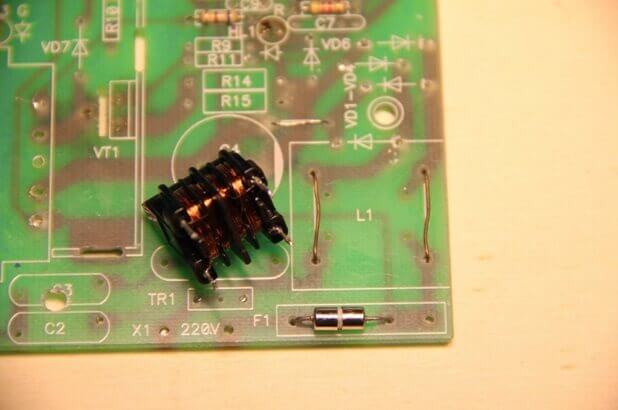 By the way, the power supply can work without it, many Chinese people do their products, this is often found in cheap PSUs for computers and more. Because of this, such a large amount of unwanted interference occurs in the network.

If you did not find such an element in your reserves, you can search for a ferrite ring with a magnetic permeability of 400-2000 Nm and wrap it with PEV-2 copper varnished wire (you can use the primary winding with a 50 Hz network transformer) with a diameter of 0.5 mm, it depends on load power that you want to connect. Wrap around the ringlet as shown in the picture, pre-wrapping it with several layers of dielectric, for example: electrical tape, varnish, kapton tape. 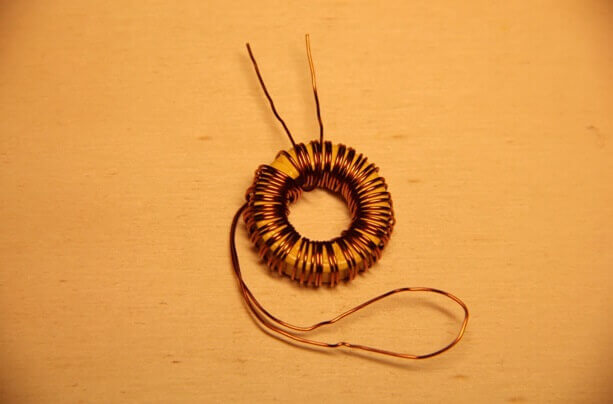 Use a wire with a high-quality, undamaged varnish. And after winding for reliability, coat the part with several layers of varnish. The loop at the end should be cut, ideally - immediately winding with two parallel wires.

A good scheme that is easy to do with your own hands is as follows: 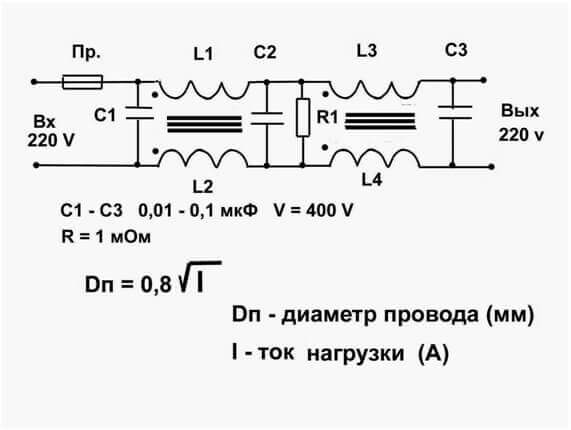 And here is a concrete version of its implementation “in hardware”. For the basics, a couple of filters from BP are taken. 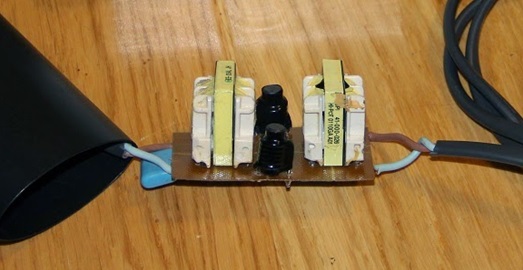 Capacitors it is better to use ceramic or film. You can also get them from the power supply, they are often found there near the network connector in a rectangular case in the form of a parallelepiped. 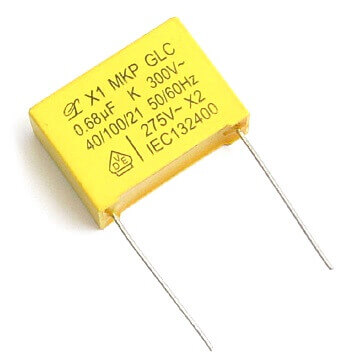 If there is an unnecessary power supply, you can simply cut off part of the board with a filter and use it. Here is an example in the photo showing what you need to saw off to get a surge protector in a couple of minutes. Just be careful not to overlay the layers of the board with metal filings, this can lead to a short circuit. Be sure to place the finished device in a non-conductive enclosure for safety. 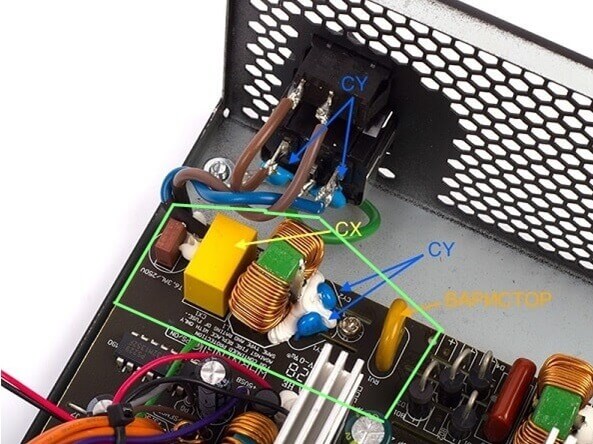 And here is another version of the scheme for repetition. It is it that is used in many ATX standard power supplies:

The surge protector is a useful and simple device that is not difficult to do yourself at home. And when you consider that many have several unnecessary, inoperative devices, it turns out that the parts are literally lying under our feet. Therefore, the manufacture of a device that can extend or even save the life of expensive equipment is a very profitable occupation. Finally, we recommend that you look at some interesting video instructions for building a homemade surge protector: