How to make modular pin grounding

One of the options for installing the grounding circuit in a private house is the installation of pin grounding. In this case, the operating time is significantly reduced, while the functionality of the ground electrode system is not inferior to similar systems (linear, electrolytic, etc.). In this article we will tell you how to make a modular-pin grounding with your own hands and what are the advantages of such a system.
Content:

What is such a system and what does it consist of? The device consists of steel one and a half meter pins, which are processed with copper and are connected using couplings. Also included is a brass clamp, which connects horizontal and vertical contours. Below is a design diagram. 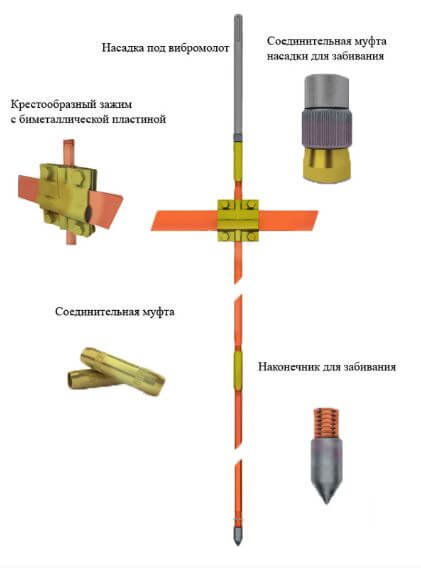 The modular pin earthing system is installed as follows: a landing pad (nozzle) is mounted on the top of the pin, which in turn is connected to the coupling. The nozzle is necessary to transmit the force of the vibratory hammer. A steel tip is installed on the bottom of the structure. It simplifies driving into the ground. There are several varieties of tips, the scope of which depends on the hardness of the soil. 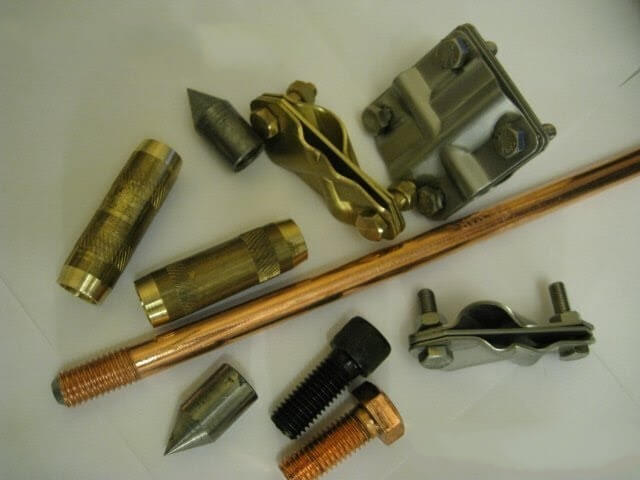 In addition, a special electrically conductive liquid paste is attached to the kit, the purpose of which is corrosion protection and constant maintenance of electrical resistance during operation. Electrically conductive paste is applied to all threaded joints of the structure. You can also use a special moisture-proof adhesive tape against corrosion. It is resistant to acids, salts and gases, does not pass moisture.

Modular pin grounding is installed according to a simple principle. The tip is put on the first pin first. But before installation it should be treated with a conductive paste from corrosion. At the other end, screw the coupling and also treat it with anti-corrosion paste. Then a landing pad is screwed onto the device to apply the forces of the vibratory hammer.

The modular pin grounding, which is assembled, is placed in a previously prepared hole in the ground. You need to screw it as deep as possible into the ground with your own hands. Then it is necessary to connect a vibratory hammer to the network and attach it to the platform of the rod. Thus, the pin is immersed in the ground for its entire length. You only need to leave 20 cm in order to connect another rod.

After that follows measure ground resistance. To do this, remove the landing nozzle and to the place where it was located, connect a special device, an ohmmeter, as in the photo below: 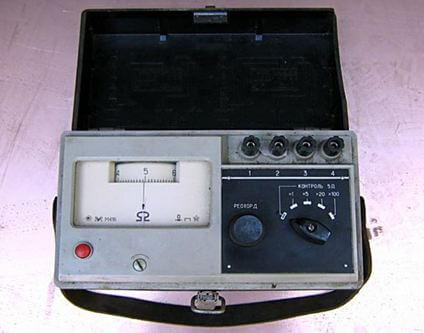 When the first rod is located in the ground for its entire length, the landing nozzle for the vibratory hammer is removed and another pin is mounted through the coupling.A special clamp that holds the pin in an upright position rises upward on the installed device. And on the mounted structure, the coupling and nozzle under the vibration hammer are again installed, after which the process is repeated.

Check the resistance to spreading should be after installing each vertical rod. The installation of the pins occurs until the necessary resistance is established. The figure below shows the diagram of the resistance change depending on the length:

Next, you need to connect a horizontal ground electrode and a vertical conductor. To do this, a brass clamp is attached to the end of the rod that protrudes from the ground and connect a horizontal ground electrode to it. A special plate is placed between the pin and the horizontal cable, which protects against corrosion when dissimilar metals come in contact. After the system has been connected, the joints are treated with special adhesive tape. It serves as additional protection against corrosion.

Advantages and disadvantages of the system

Modular pin grounding, like any system, has its pros and cons. Compared to the classic and standard circuit, the pin ground has the following advantages:

Modular pin grounding has one, but a significant drawback - this is its high cost. But, despite this drawback, the system is profitable, given all its advantages.

The industry produces a wide variety of kits that combine such elements that are necessary for reliable and high-quality installation. Modular pin grounding has an important purpose - it is to protect the house from fire, and people who are in the room from electric shock.

It should also be noted that in order to do pin grounding with your own hands, you need to draw up a certain package of documents. For example, they include a measurement protocol, an act of hidden work and an installation passport with a diagram. These documents must be kept by the owner of a private house. 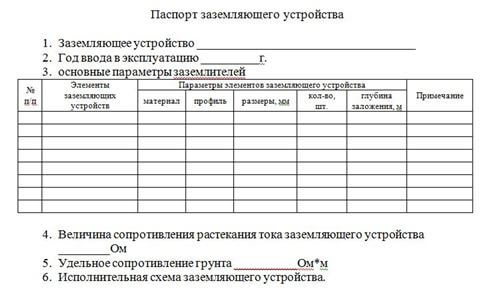 Finally, we recommend watching a video that demonstrates the installation of a pin earthing switch with a jackhammer:

We hope that now you know what a modular pin grounding is, what are its advantages and how to install a circuit yourself!