Lay the cable underground You can either in the pipe or in the cable duct. This is a complex structure designed to lay many lines, both low-voltage (communication, telephone, Internet), and power. In this article we will look at how the cable is laid in the cable duct and in which documents the requirements for this process are described.
Content:

What is cable drainage and how is it arranged

Cable sewage is an underground method for laying cable lines in a structure consisting of channels (pipes) and wells for their inspection and maintenance.

A distinctive feature of cable laying in cable ducts is the possibility of replacing old and laying new lines without carrying out earthwork, that is, through the channels available in it using underground pulling.

The technology of laying the line is that the end of the cable is lowered into the well, and then pulled into the existing channels manually or using special mechanisms. The cables themselves are often laid in a single piece equal to its construction length, that is, without unnecessary connections in transit pass through intermediate wells. 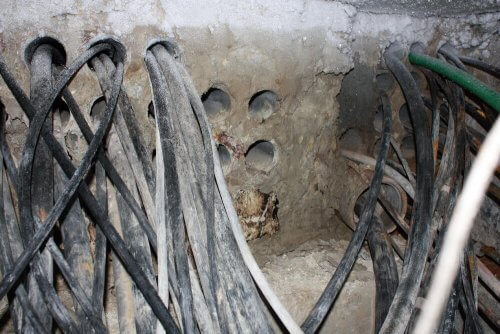 In this way, it is possible to lay both power cables and communication cables, such as a telephone network or FOCL, they are also fiber-optic lines, they are used for data transmission (for example, the Internet, television, telephone communication). However, the power cable cannot be located in the same pipe with the communication cable (This is indicated by the rules of the PUE, namely chapter 2.1. paragraph 2.1.16, chapter 2.3. paragraph 2.3.86 and other documents, for example, BCH 116-93 p. 6.3., P. 8.2 and other more modern).

The distance between the wells of cable ducts depends on the location of the sewer itself and the type of cables laid in it, and can be quite large (from 25 to 150 meters). The depth of the pipe depends on the load on the soil and its type, usually lies in the range of 40-200 cm. That is, under the road they lay at a greater depth, where there are no roads - at a smaller one.

In this case, the slope of the pipe should be maintained on the order of 3-4 mm per meter (so that moisture does not accumulate). The pipes themselves are laid in a straight line, only a small displacement is permissible, no more than 10 mm per 1 m of length. In the modern world, various polymer pipes (for example, polyethylene) are more often used, and in old cable ducts - metal or asbestos-cement. The inner diameter of the pipes usually does not exceed 100 mm.

As for the wells, they have different names, depending on their location and purpose:

How to lay the cable

There are different ways of laying the cable, associated with the design features of both the cable itself and the sewage system in which it is laid. However, in general, cable installation in cable ducts can be divided into several stages: 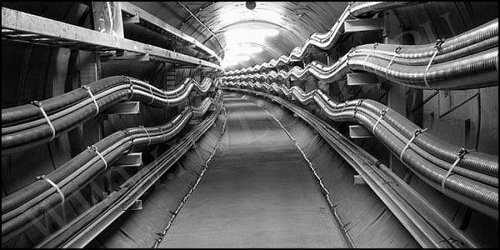 The table below shows the norms for choosing a method for pulling a cable line through cable ducts:

The set of equipment, as already noted, will differ depending on the installation features and the type of cable product, we present one of the typical options:

Based on the foregoing, the following answer can be given - it is impossible to lay the cable in the cable duct with your own hands in any way, because you need a set of tools and permission to carry out such work. The installation of underground lines in this way should be carried out by an organization on the balance of which there is a specific sewage system, or an organization that has permission and access to it. 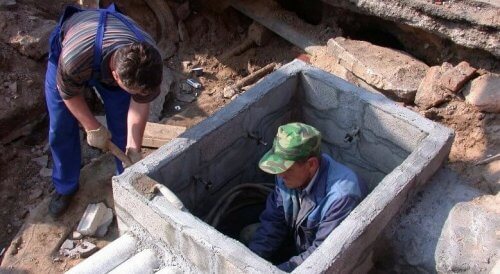 There are several regulatory documents that establish the rules for laying cables in cable ducts:

The canceled documents were distributed among a number of other documents, where the norms and requirements for cable laying in cable ducts are described in separate paragraphs, the list can still be continued, but we selected the most frequently used documents.

In the end, we recommend watching useful videos on the topic of the article: