How to connect a motion sensor for lighting?

Before proceeding to the instructions for connecting a motion sensor for do-it-yourself lighting, I would like to note that the device in question — it’s not the same as light sensor, which we already talked about in a previous article. This product is designed to instantly turn on the light when any object enters the detection zone. We will talk further about how to install and connect a motion sensor yourself!
Content:

What is the principle of work?

Many people wonder how this detector works. To readersElecroExpert"Were fully aware, first we quickly go over the basic principle of the sensor. 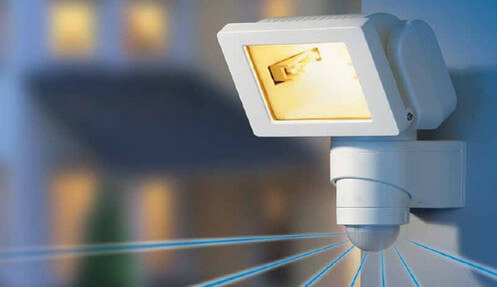 The activation and activation of the lamp will depend on what type of detector you have chosen. Today, there are the following types of motion sensors for lighting:

For street use, it is best to install the second version of the motion sensor, which is also suitable for use in an apartment (entrance). The remaining two options are more often used in security systems. As for the principle of operation, everything is not complicated here - the detector, upon detection of an object (or sound / temperature increase), gives a signal, as a result of which the relay closes the circuit and the lamp turns on.

By the way, you can make a simple detector with your own hands, unless of course you have the slightest skills in working with a soldering iron. If you are interested in creating such a useful homemade product, we recommend that you watch the video lesson provided below.

The second, important nuance that you should know is the connection diagram of the motion sensor to the lighting. Today, the device can be connected directly to the luminaire, through a conventional switch or in combination with another detector installed in another location.

To your attention all four options for wiring the wires to the terminals: 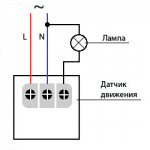 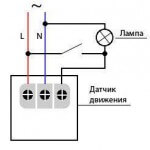 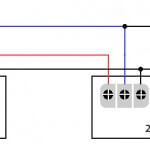 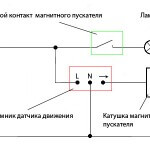 By the way, it is not necessary to output a new line from the junction box, creating additional strobes in the wall. The light control device can be connected to a power outlet by connecting an electric cord with a plug or by “plugging” directly to the connection point of the chandelier to the mains. There are also modern battery-powered models (wireless).

As for the first motion sensor connection diagram, it is the simplest, but at the same time, and the least convenient for use in a house and apartment, because the light will only turn on when detection occurs. The second option is more convenient, because it becomes possible to switch the circuit to a conventional keyboard switch.In this case, the current will bypass the detector, which will make the lighting in the room constant until the circuit breaker manually opens.

Electrical circuit with magnetic starter It is used if you decide to connect powerful light sources, for example, several spotlights, to the detector. The fact is that one of the characteristics of the sensor is the rated power, which most often varies from 500 to 1000 watts. If the total power of the light sources is greater than in the characteristics, it is necessary to add a magnetic starter to the circuit.

The last connection scheme is used if it is necessary to monitor a spacious room or a winding corridor. This is due to the fact that the maximum range of a conventional device does not exceed 12 meters (expensive modern models can detect an object within 20 meters). If you want to control a large territory, for example, a garden in the country, which will be illuminated by a street lamp, one detector is not enough and the territory will only be partially controlled. The same situation is with the winding corridor in which you decide to install a motion sensor for lighting. Each turn is an obstacle for which control will not be exercised. That is why, in order for the triggering to occur, and accordingly the inclusion of light, it is necessary to connect the detectors at several points.

We figured out the wiring diagram and the principle of the device. The last and most important thing left is to provide a technology for connecting a motion sensor for lighting. 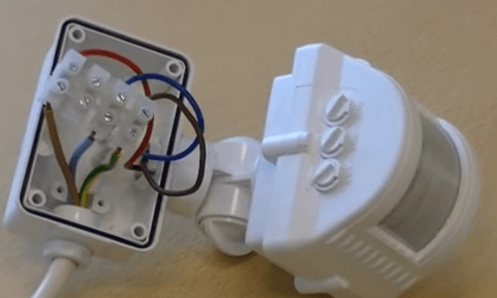 So, to connect the motion sensor to the 220 V network with your own hands, you must perform the following steps:

That's the whole step-by-step installation instruction for the detector! We hope that now you know how to install and connect a motion sensor for DIY lighting! For you to clearly see the essence of the event, we provide this video instruction:

In the end, I would like to give a couple of tips on installing and connecting a motion sensor for lighting. Firstly, it is desirable to place the product body away from devices that emit electromagnetic waves, because they can trigger a false positive. Secondly, wipe the dust off the lens more often, as any pollution will negatively affect the system’s response. Well, and thirdly, if you decide to connect the detector in the country, place it away from trees and bushes, which will also be interference!