How to get electricity from the earth and is it possible

Many free engineers, such as Nikola Tesla, and the crowds of pseudoscientists who were only waiting for exposure, were asked about the free generation of electricity. The result of their work is a number of schemes and methods for generating energy from alternative sources. There are few actual installations or experiments that can be of practical use. In this article we will look at how you can get electricity from the earth.
Content:

Before considering technological schemes and answering the question “how to take electricity from the soil?”, Let's see how realistic this is.

It is believed that there is a lot of energy in the earth and, if you make the installation, you will always use it for free. This is not so, because to get energy you need a certain piece of land and the metal pins that you install in it. But the pins will be oxidized and sooner or later the energy intake will end. In addition, its quantity depends on the composition and quality of the soil itself.

To achieve good power, you need a very large piece of land, so in most cases the energy received from the ground is enough to turn on a pair of LEDs or a small light bulb.

It follows that it is possible to get energy from the earth, but it is unlikely to be used as an alternative to electric networks.

Electricity from ground and ground

This method is suitable for residents of private houses, if they have a grounding circuit. Do you know that between the ground electrode and the neutral wire there is often a potential difference of 10-20 volts? This means that they can be used for free. You can raise them with a transformer. 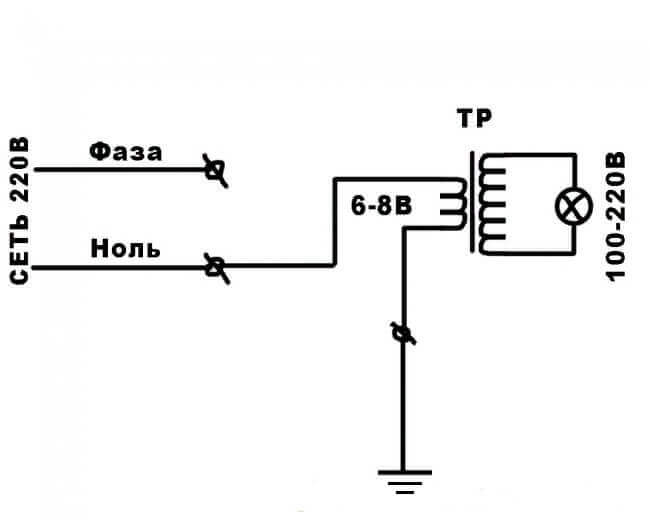 Energy consumed in this way by the meter will not be taken into account. Such a voltage can be determined either with a voltmeter, or by connecting between these two wires a low-voltage bulb such as those that are installed in the dimensions or dashboards of cars.

Important! Do not confuse the phase with zero - it is dangerous!

It is worth noting that a separate device made of metal pins driven to a depth of more than 1 meter is used as an earthing switch. The pipeline in most cases will not give a good result. Read more about grounding in a private house You can find out from our separate article.

Potential between the roof and the ground

This method also requires driving a metal pin into the ground, a wire is connected to it. The second wire connects to the metal roof. So you get a couple of volts. The current from such a circuit will be negligible and not the fact that it is enough to turn on one LED.

The next way is simple chemistry. This is the most real and understandable way to get electricity from the earth at home. For this, copper and zinc electrodes are needed. In their role, plates, pins, nails can act.If copper is common, zinc can cause problems, so it is easier to find galvanized iron.

You need to drive your electrodes into the ground at the same distance from each other. Let's say 1 meter deep and 0.5 meters between the electrodes. In this case, copper will be the cathode, and zinc will be the anode. The voltage of such an element can be of the order of 1-1.1 Volts. This means that to get electricity from the earth with a voltage of 12 volts, you need to hammer 12 of these electrodes and connect them in series.

The decisive factor in such a battery is the area of ​​the electrodes, and the current strength depends on it, exactly, as well as what is between them. In order for the battery to give out current, the earth must be moist, for this it can be watered, sometimes a zinc electrode is poured with a solution of salt or alkali. To increase the current efficiency, you can clog more electrodes and connect them in parallel. Thus, all modern batteries and accumulators are arranged.

In the diagram below, you see another interesting implementation of such a battery of copper pipes and galvanized rods. 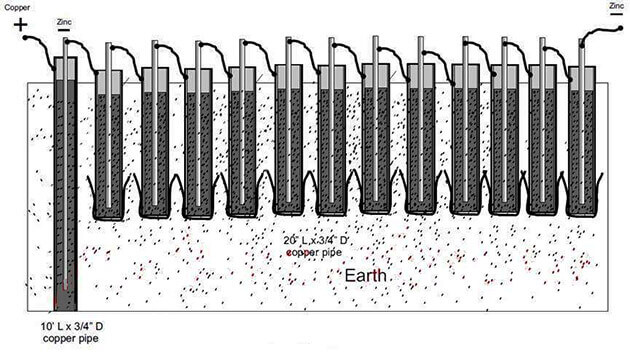 However, over time, the electrodes break down and the battery gradually stops working.

Method for generating electricity according to Belousov

Valery Belousov has been studying lightning and protection against them for many years. He is the author of books on free energy and has developed a number of solutions to get electricity from the earth.

In the diagram you can see two grounding symbols. Here, one of them is an earthing switch, and the second, next to which the letter "A" is zero of a household electrical network. The following video demonstrates the operation of such an installation and describes the results obtained with its help:

The energy received is enough to power a 220-volt low-power LED lamp. This method is convenient to use in the country, it can be easily reproduced at home.

Getting free electricity from the earth with your own hands is possible. But it’s difficult to talk about the practical application and connection of powerful consumers. You don’t start the refrigerator like that. To date, the only well-studied source of electricity from the bowels of the earth is natural resources such as coal, gas, fuel for nuclear power plants, etc.