What is asynchronous motor slip

Sliding is one of the main characteristics of an electric motor. It varies depending on the mode of operation, the load on the shaft and the supply voltage. Let's take a closer look at what a motor slip is, what it depends on and how it is determined.
Content:

Three-phase principle of operation induction motor pretty simple. A supply voltage is applied to the stator winding, which creates a magnetic flux, in each phase it will be shifted by 120 degrees. In this case, the summing magnetic flux will be rotating.

The rotor winding is a closed loop, it induces Emf and the resulting magnetic flux rotates the rotor in the direction of motion of the stator magnetic flux. Rotating electromagnetic moment tries to balance the rotation speed of magnetic fields stator and rotor.

The value that determines the difference in the rotational speeds of the magnetic fields of the rotor and stator is called slip. Since the rotor of an induction motor always rotates more slowly than the stator field, it is usually less than unity. May be measured in relative units or percent.

It is calculated by the formula:

Sliding is an important characteristic that characterizes the normal operation of an induction motor.

The amount of slip in different operating modes

In idle mode, the slip is close to zero and is 2-3%, due to the fact that n1 almost equal to n2. It cannot be equal to zero, because in this case the stator field does not intersect the rotor field, in simple words, the motor does not rotate and the voltage supplying it is not supplied.

Even in perfect idle mode, the slip value, expressed as a percentage, will not be zero. S can also take negative values ​​in the case when the electric motor is in generator mode.

In the generator mode (rotation of the rotor is opposite to the direction of the stator field), the DE slip will be in the values ​​-∞

There is also a mode of electromagnetic braking (rotor counterclockwise), in this mode the slip takes on a value greater than unity, with a plus sign. 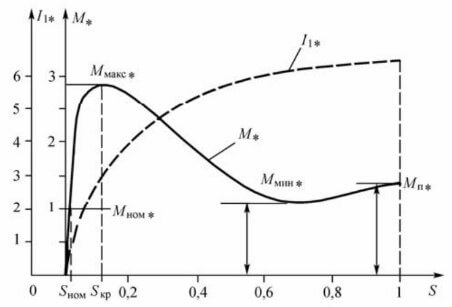 where f1 Is the frequency of the current supplied to the stator windings, and S is the slip.

The frequency of the rotor current is directly proportional to its inductive resistance. Thus, the dependence of the current in the rotor on the slip of the AM is manifested. The torque of the electric motor depends on the value of S, as it is determined by the values ​​of the magnetic flux, current, shear angle between the EMF and the rotor current.

Therefore, for a detailed study of the characteristics of blood pressure, the dependence shown in the figure above is established.Thus, the change in torque (at different slip values) in the motor with a phase rotor can be controlled by introducing resistance into the circuit of the rotor windings. In squirrel cage motors, the torque is controlled either by frequency converters or using variable speed motors.

At a rated motor load, the slip value will be in the range of 8% -2% (for low and medium power motors), the rated slip.

At a certain amount of slip, the moment will reach its maximum value, then it will begin to decrease. The value at which the moment will be maximum is called critical (Scr).

In graphical form, the mechanical characteristic of an induction motor can be expressed using the Kloss formula: 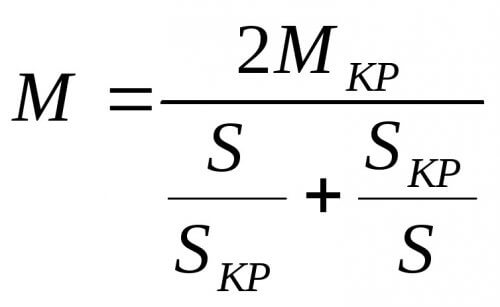 where, Mto - This is a critical moment, which is determined by the critical slip of the electric motor.

The schedule is based on the characteristics specified in the AD passport. If you have questions about the drive, this schedule is used as a propulsion device using an asynchronous electric motor. 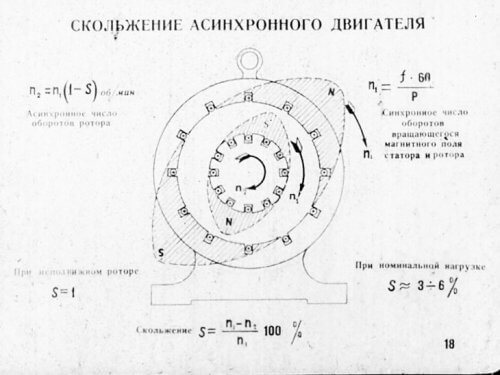 There are several ways to measure the slip of an induction motor. If the rotational speed is significantly different from the synchronous one, then it can be measured using a tachometer or a tachogenerator connected to the ED shaft.

The option of measuring by the stroboscopic method using a neon lamp is suitable for a slip value of not more than 5%. To do this, either a special feature is applied on the motor shaft with chalk, or a special stroboscopic disk is installed. They are illuminated with a neon lamp, and the rotation is counted for a certain time, then, according to special formulas, they calculate. It is also possible to use a full-fledged strobe, similar to what is shown below.

Also, for measuring the amount of slip of all types of machines, an inductive coil method is suitable. The coil is best used from a relay or contactor DC, due to the number of turns (there are 10-20 thousand), the number of turns should be at least 3000. A coil with a sensitive millivoltmeter connected to it is placed at the end of the rotor shaft. According to the deviations, the arrows of the device (the number of oscillations) for a certain time calculate the slip value according to the formula. In addition, for an asynchronous phase-rotor motor, slip can be measured using a magnetoelectric ammeter. The ammeter is connected to one of the phases of the rotor and the number of deviations of the arrow of the ammeter is calculated (according to the formula from the method with an inductive coil).

So we examined what a slip of an asynchronous motor is and how to determine it. If you have questions, ask them in the comments under the article!