What is a power cable, what does it serve and where is it used

In an apartment and in a car, as well as in other rooms and areas of life, you can’t do without a power cable when connecting various devices and equipment. But, what is it and how to distinguish it from other types of electrical conductors? In this article we will consider what a power cable is and what it is intended for.
Content:

Power cable - in a broad sense, it is a cable for transmitting electrical energy, connecting consumers to power from switchboards of industrial and municipal facilities. It is traditionally believed that a wire for connecting lighting devices having a cross section of less than 1.5 square mm is lighting, and a cable for connecting more powerful devices is a power cable (this also does not include acoustic wire for an amplifier, network cable for a computer, television) .

In some cases, the lighting wire is also called the supply wire. For example, when connecting powerful lighting devices. It is also fair to call a power cable a twisted pair for retro wiring.

There is a huge variety of electric power cables depending on the size and features of the device. All the characteristics of the power cable depend on the conditions in which it will be used and the capacities of the consumers it will power. The minimum design of each product consists of several important elements: a conductive core, a protective insulating sheath of each core and the cable as a whole.

Aluminum or copper are the two main materials that are used to make conductive wires. The choice of these materials is due to their high conductive properties (low resistance).

In an electric wire there can be a different number of cores of various shapes. They can consist of single wires or with multi-wire copper cores.

By the nature and composition of the containment, several main types of execution are distinguished:

With rubber insulation, they are used during installation of systems at a maximum voltage of 10 kV. The advantages of this insulation are low moisture absorption and good flexibility, simplifying the installation of complex tracks. The main disadvantage is the inability to use in open networks, due to the instability of this type of insulation to ultraviolet rays and ozone. 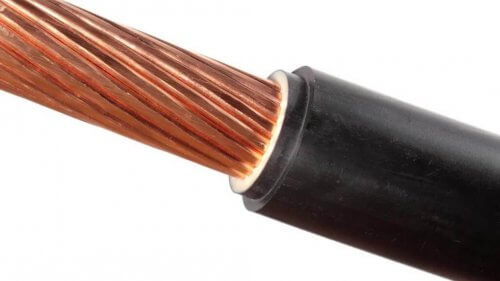 A power cable with cross-linked polyethylene insulation is used in networks with any voltage and is divided into groups according to the maximum voltage value. The first group is used at voltages from 6 to 32 kV, the second from 45 to 150 kV and the third from 220 to 330 kV. This coating can withstand very high temperatures and moisture, and also has a low weight compared to other types. 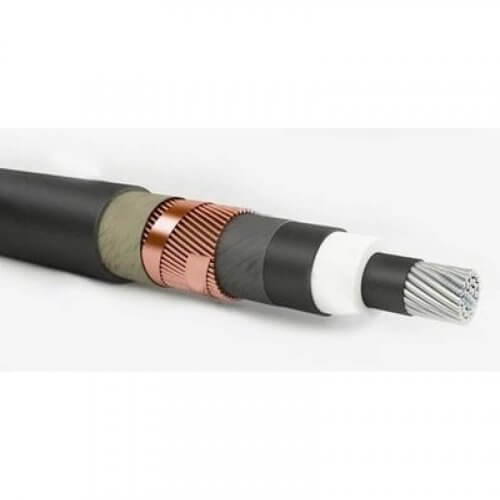 With oil-impregnated paper insulation, an electric power cable is used to transmit electrical energy in networks with voltages up to 35 kV. For additional protection against moisture, mechanical and chemical effects on paper insulation, such a wire has a lead sheath. The aluminum shell is not used in aggressive chemical environments, as it is easily destroyed. 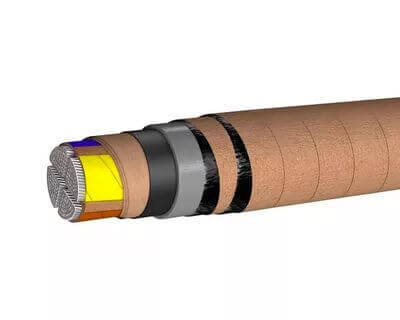 PVC is one of the most common types of insulation materials for electric power cables in household and utility networks with voltages up to 660 Volts, as well as industrial low-voltage networks (1-6 kV). The most widespread is due to its manufacturability and low price, as well as high elasticity and incombustibility.

In addition to core insulation, the cable usually has a common protective sheath, which serves to combine all the wires and protect them from aggressive environments, mechanical and other influences. It is also made of various polymeric materials that do not conduct electric current; it can have various thicknesses, flexibility, and other necessary properties.

At the moment, different types of marking are used to indicate the various properties of the power cable. To indicate the materials of the core and insulation, letters are used that are marked in certain places and determine the type and purpose of the product.

Types of insulation are indicated by the following signs, after the core material. “B” - means a coating of polyvinyl chloride (VVG), “C” - with paper-impregnated insulation, “НР” - non-combustible with rubber insulation, and П - indicates a polyethylene coating.

The protective sheath is marked as follows: C - lead, O - protection of each separately, A - aluminum, P - from polymeric materials, B - from polyvinyl chloride.

Certain types of power cable have armor for protection against external negative factors and are marked by the type and composition of the armor:

Depending on the shielding, the power cable can be made with a copper screen along an insulated conductive conductor (E), with a common screen for a stranded wire (EO), sealed design (g).

The types of combustibility of the material of the containment can be determined by the special symbols that are indicated at the end of the entire marking: “ng” - non-combustible wire, “ng LS” - non-combustible protection, which has a low emission of harmful substances.

Letter marking foreign manufacturers are different from each other, since different standards are used for the types of products. But the designation principle remains unchanged for any material: each symbol denotes a sequence of materials from the inner to the outer layer, that is, from the core material to the protective sheath. 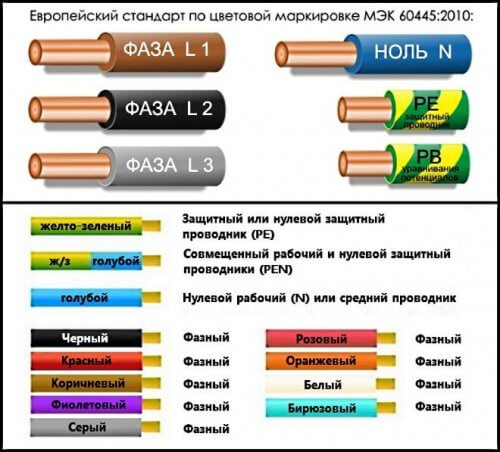 For easy installation, in addition to the letter marking of the power cable, there is a color marking by type and purpose. Different countries use different color markinghowever, most countries adhere to the officially adopted standard adopted by the IEC (International Electrotechnical Commission). In the classic case, the blue wires indicate the neutral conductor, black or brown - phase wire, and two-color yellow-green indicates the ground wire.