What is a stepper motor, why is it needed and how does it work

DC stepper motors are widely used in numerically controlled machines and robotics. The main difference of this electric motor is the principle of its operation. The shaft of a stepper motor does not rotate for a long time, but only rotates a certain angle. This ensures accurate positioning of the work item in space. The power supply of such an engine is discrete, that is, it is carried out by pulses. These pulses also rotate the shaft by a certain angle, each such rotation is called a step, hence the name. Often, these electric motors work in tandem with a gearbox to increase the accuracy of the installation and the torque on the shaft, and with an encoder to track the position of the shaft at the moment. These elements are necessary for transmitting and converting the angle of rotation. In this article we will tell the readers of the site Elecroexpert about the device, the principle of operation and the purpose of the stepper motors.

How a stepper motor works

In type it is a brushless synchronous electric motor. Consists of stator and rotor. On the rotor, sections are usually located, assembled from sheets of electrical steel (in the photograph this is the “gear” part), and those, in turn, are separated by permanent magnets. On the stator there are windings in the form of separate coils. 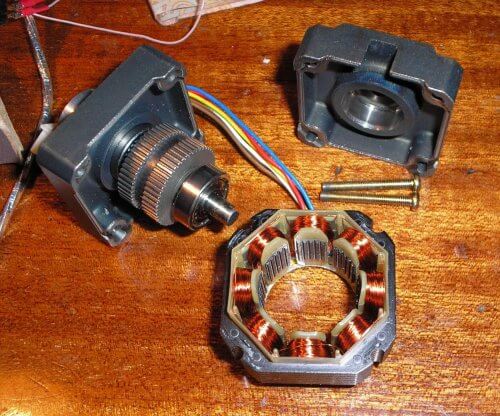 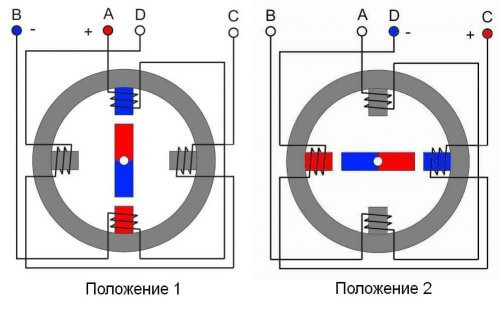 If voltage of the same polarity is applied to windings D and C, the electromagnetic field will shift. This causes the permanent magnet rotor to rotate to position 2. In this case, the rotation angle is 90 °. This angle will be the step of rotation of the rotor. 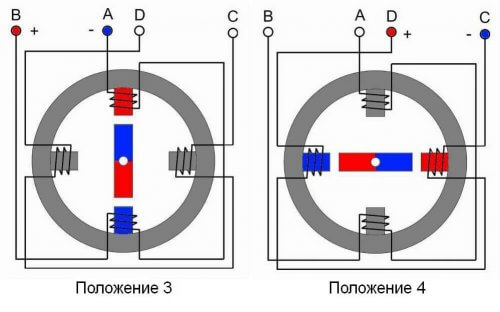 Position 3 is achieved by applying reverse polarity voltage to windings A and B. In this case, the electromagnetic field will become opposite to position 1, the rotor of the motors will shift, and the total angle will be 180 °.

Types and types by polarity or type of windings

In stepper motors, bipolar and unipolar windings are used. The principle of operation was considered on the basis of a bipolar machine. This design involves the use of different phases to power the windings. The circuit is very complex and requires expensive and powerful control cards.

A simpler control scheme in unipolar machines. In such a scheme, the beginning of the windings are connected to a common "plus". On the second conclusions of the windings, a minus is alternately applied. This ensures the rotation of the rotor.

Bipolar stepper motors are more powerful, their torque is 40% more than in unipolar. Unipolar electric motors are much more convenient to operate. 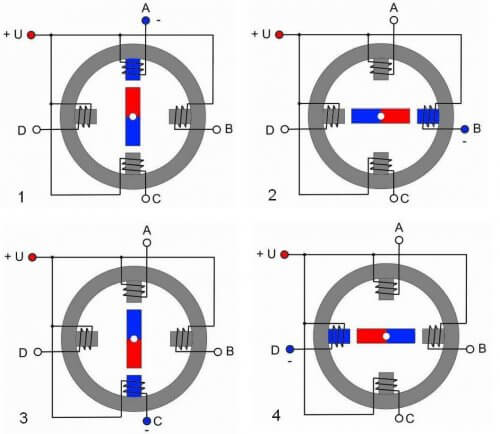 Types of motors for rotor design

According to the type of rotor design, stepper motors are divided into machines:

Permanent magnet stepper motor on the rotor is arranged in the same way as in the above examples. The only difference is that in real machines the number of magnets is much larger. They are usually distributed on a shared drive. The number of poles in modern motors reaches 48. One step in such electric motors is 7.5 °. 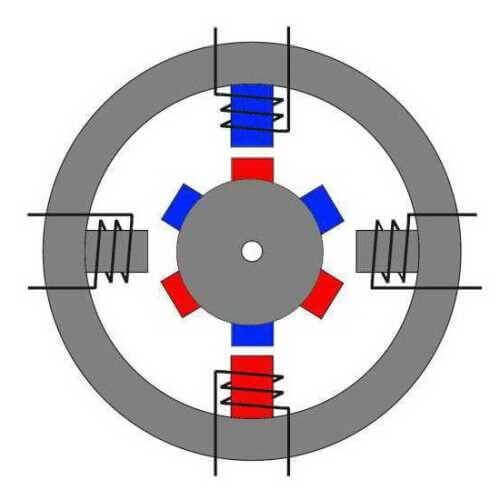 Electric motors with variable magnetic resistance. The rotor of these machines is made of soft magnetic alloys, they are also called "jet stepper motor". The rotor is assembled from individual plates and in the context looks like a gear wheel. This design is necessary so that magnetic flux closes through the teeth. The main advantage of this design is the absence of a locking moment. The fact is that the rotor with permanent magnets is attracted to the metal parts of the electric motor. And to turn the shaft in the absence of voltage on the stator is quite difficult. In a stepper motor with variable magnetic resistance there is no such problem. However, a significant disadvantage is the small torque. The pitch of such machines is usually from 5 ° to 15 °. 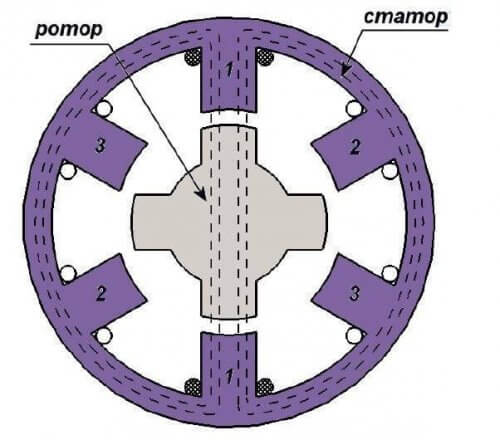 The hybrid stepper motor was designed to combine the best features of the two previous types. Such engines have a small pitch in the range from 0.9 to 5 °, have a high torque and holding ability. The most important plus is the high accuracy of the device. Such electric motors are used in the most modern high-precision equipment. By cons can be attributed only their high cost. Structurally, the rotor of this device is a magnetized cylinder on which magnetically soft teeth are located.

For example, in a 200-step stepper motor, two gear discs with 50 teeth each are used. The disks are shifted relative to each other by a tooth so that the depression of the positive pole coincides with the protrusion of the negative and vice versa. Due to this, the rotor has 100 poles with reverse polarity. 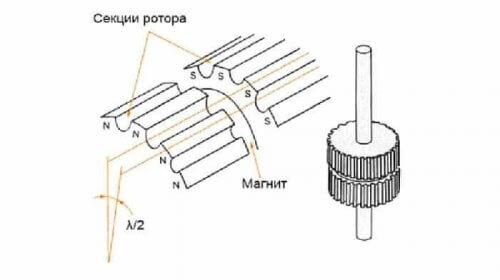 That is, both the south and north poles can shift relative to the stator in 50 different positions, and in the total of 100. And a phase shift of a quarter gives another 100 positions, this is done by sequential excitation. 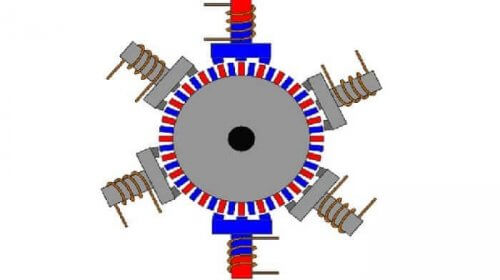 Management is carried out by the following methods:

Advantages and disadvantages of stepper motors

The advantages of this type of electric machines include:

A stepper motor is also called a “finite-rotor position electric motor”. This is the most capacious and at the same time brief definition of such electric machines. They are actively used in CNC machines, 3D printers and robots. The main competitor to the stepper motor is servo, but each of them has its own advantages and disadvantages that determine the appropriateness of using one or the other in each case.