What you need to know about exhaust fans when choosing them

Fresh air is very important for a comfortable human existence. Ensure its presence in the premises helps ventilation systems. Ventilation is needed not only to ensure that the person in the room does not feel odors, but also to create normal working conditions and maintain good health. In addition, due to timely ventilation, it is possible to extend the life of finishing materials, prevent the growth of mold and mildew, and the detachment of wallpaper and decorative elements of wooden furniture. In this article we will tell you how to choose an exhaust fan for a bathroom, toilet, kitchen and other rooms.
Content:

What is an exhaust fan?

In some rooms, simple ventilation is not enough to eliminate unpleasant odors or high humidity. In such cases, systems with a supply and exhaust principle of action come to the rescue. Exhaust fans are installed in the opening of the ventilation duct and forcibly pull out the exhaust air from the room, the place of which is another, cleaner and fresher. Most often, such systems are mounted in a toilet, bathroom or kitchen, since it is in these rooms that there are a lot of odors, and the humidity is high.

Typically, an exhaust fan is a small single-axis device with seven to nine blades. Its outer part is an overlay with a grill, behind which you can see the impeller. The grill itself often has the form of blinds necessary to prevent the penetration of air from the mine into the room. In addition, a plastic mesh is placed behind the external decorative grill, which protects the moving parts of the product from dust and dirt, which can mechanically damage the device. 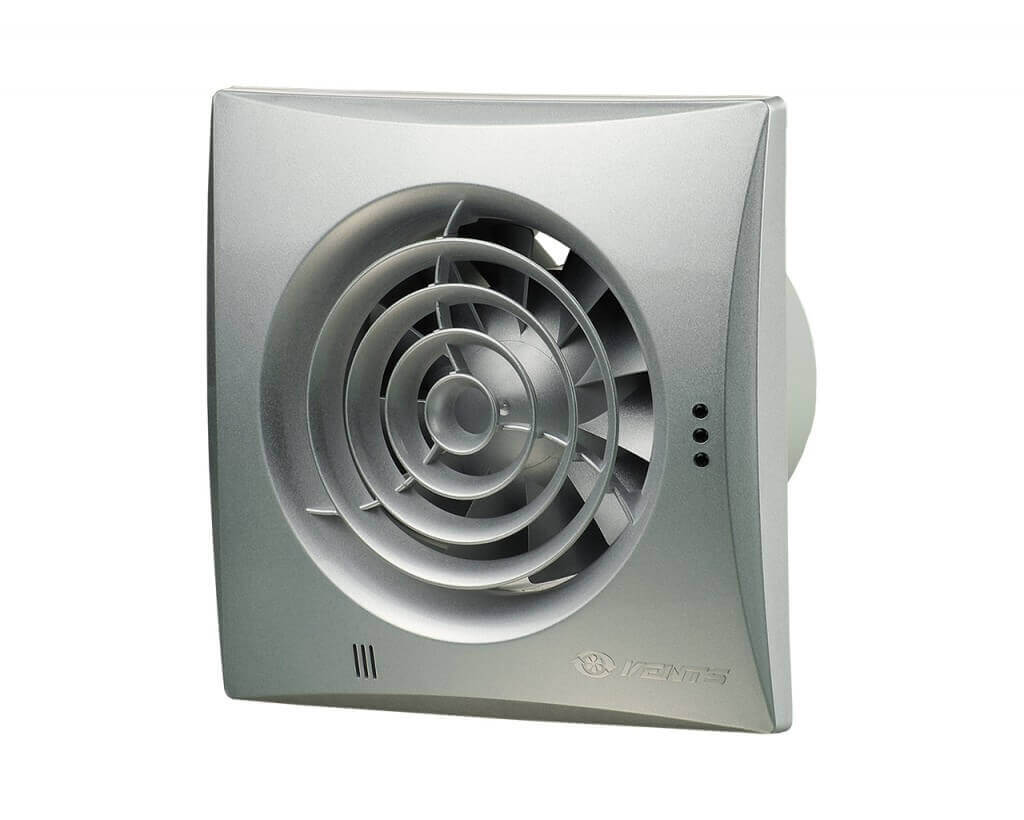 Fans with a non-return valve are designed for irregular operation and prevent air from being drawn into the apartment from neighboring rooms. In addition, it is extremely important for country houses that insects and small rodents cannot get into the living quarters through the ventilation passages. At times when there is no power supply, the valves of this type of model are closed, thereby blocking access to any external influences.

Aspects of choosing the right model

Depending on how you plan to ventilate the room, the method of installing these devices will vary. There are three ways:

The first two options involve direct mounting on the specified surface. They are attached to the supporting partition and are connected through a special hole to the duct leading to the nearest vertical common house ventilation duct.Sometimes you can find combined models, one part of which is fixed in the wall, and the other in the ceiling.

In turn, duct exhaust fans are installed directly in the ventilation passage, and not in its base. A similar unit is able to collect air from several neighboring rooms at once and drive it out.

When choosing a fan, it is necessary to consider the following points:

In addition, it is worth paying attention to the materials used in the manufacture of fans. So, rectangular and square models are often made in a metal case, and round - in a plastic one. Of course, the metal is much more durable, but it is characterized by slight rattling during operation. At the same time, plastic absorbs noise much better, but does not withstand the load in mines with constantly high humidity and temperature changes.

How to calculate exhaust fan power

Suppose we want to calculate the exhaust ventilation for a bathroom measuring 2 * 2 m. With a ceiling height of 2.5 m, the total volume of the room will be 10 m3. This value must be multiplied by a number in the range from 5 to 10, taking into account how many people and how often they use the room. For a family of three with a small child, the coefficient 7 will be normal. Thus, we get a minimum device capacity of 10 * 7 = 70 m3 / h.

Often you should take a small margin of power, choosing from standard models. Since appliances are most often produced in increments of an even ten, the nearest large standardized capacity will be 80 m3 / h. Statistics say that for the needs of most domestic consumers, the maximum limit will be a value of 100 m3 / h.

Duct type ventilation and its features

Ducted exhaust fans belong to a single distributed system mounted directly inside the air duct. With equal probability, the channels used can have a round, square and rectangular shape. In addition, for technical or situational needs, mixed ducts can be used. 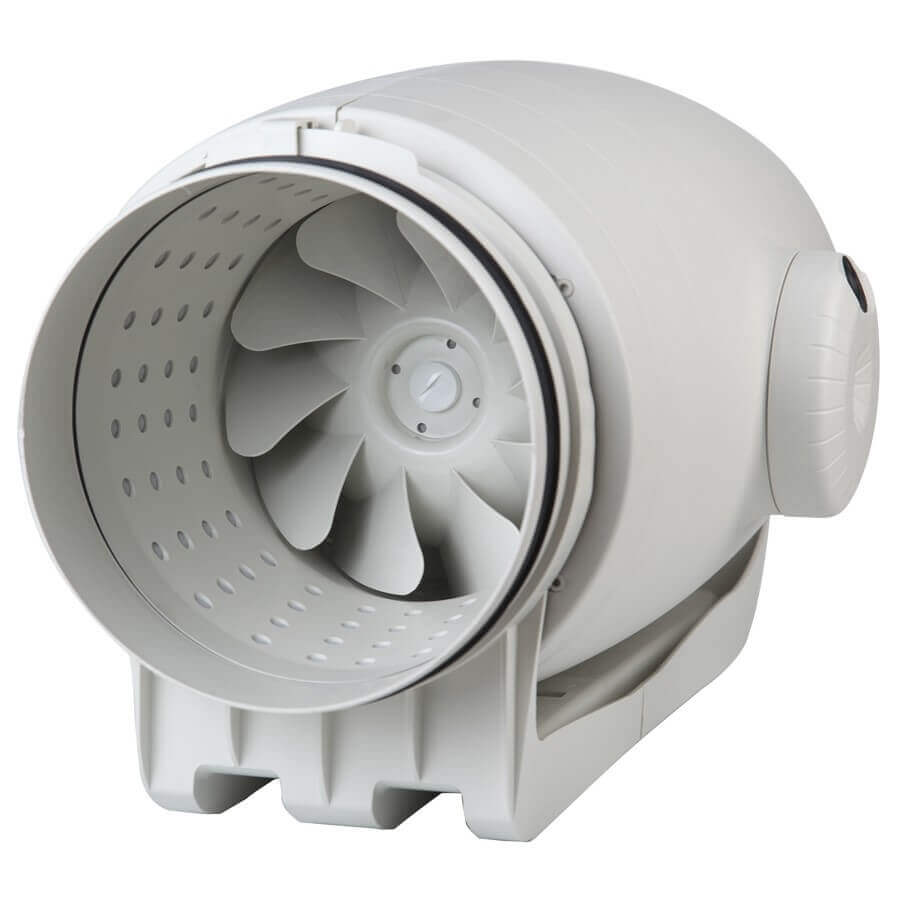 The main advantage for this type of hood is the utmost simplicity of laying communications and the overall compact design. Due to the ease of materials used, the main part of the air duct is often sewn up between the load-bearing ceiling and the false ceiling.The result is a fairly large system that does not significantly affect the appearance of the interior - the design possibilities are expanded while the quality of ventilation does not suffer.

To choose an exhaust fan for your home, do not forget about the additional functionality: individual models are initially equipped with timers that can be programmed in a convenient way. With the appropriate sensors, such a device can turn itself on as soon as you start taking a shower and the air humidity rises, and then turn off a few minutes after you leave. This can be useful in the kitchen, when the hostess cooks a lot and her hands are busy with food: without the need to click the switches, the appliance will adapt to your lifestyle. Fans with humidity sensors will help to organize the microclimate in the room so that any activity is accompanied by an adequate reaction from the exhaust equipment. 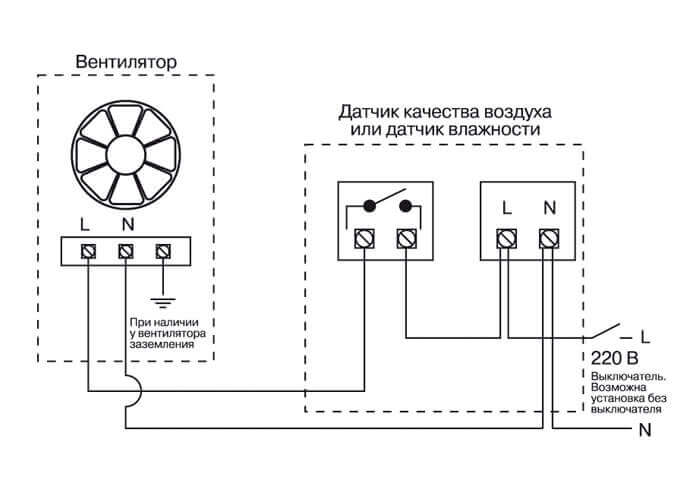 There is also a special variety of products for very humid air: only stainless parts and a special lubricant with an extended service life are used for their manufacture. However, due to their design features, they often make a noise a little stronger than conventional models.

Conventional and duct exhaust fans have found application in everyday life for all types of rooms with high humidity and the presence of extraneous odors: kitchens, bathrooms, bathrooms, closets and basements. The most common today is the kitchen option. Such devices have a compact casing with a bright outer cover mounted in place of a standard exhaust opening.

Almost all exhaust fans are quite simple and easy to use devices that allow you to quickly and efficiently clean the air in the room. They do not require special care conditions even with regular contamination - it is enough to periodically wipe the external grill and clean the protective net every six months. Under normal operating conditions, the blades and engine do not become clogged to such an extent that they require substantial cleaning.