5 schemes for the smooth inclusion of incandescent lamps

Ilyich’s bulbs still remain the leaders in popularity due to their price, but they have a very big drawback - the short term due to the destruction of the filament during switching on. Currently developed electronic devices for the smooth inclusion of incandescent lamps, which supply voltage to the spiral from zero to a maximum of several seconds. The gradual heating of the filament allows you to extend the life of the bulb several times, instead of the declared 1000 hours. Designed circuits for self-assembly have few details and usually do not require adjustment. In this article we will look at how to make a smooth inclusion of 220 V incandescent lamps with our own hands.

Attention! The devices in question have mains voltage on the elements and require special care during assembly and commissioning.

This sketch can be recommended for repetition. It consists of common elements gathering dust in attics and pantries. 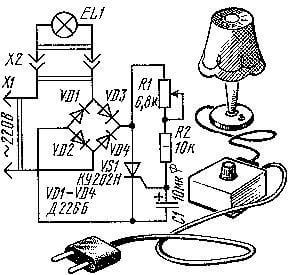 In the rectifier bridge circuit VD1, VD2, VD3, VD4 as a load and current limiter is incandescent lamp EL1. The thyristor VS1 and the shifting chain R1 and R2, C1 are installed in the arms of the rectifier. The installation of the diode bridge is due to the specifics of the thyristor.

After applying voltage to the circuit, the current flows through the filament and enters the rectifier bridge, then the electrolyte capacity is charged through the resistor. When the voltage of the thyristor's opening threshold is reached, it opens, and passes through itself the current of the incandescent bulb. It turns out a gradual, smooth heating of the tungsten spiral. The warm-up time depends on the capacitance of the capacitor and resistor.

The triac circuit has fewer details thanks to the use of the triac VS1 as a power key. 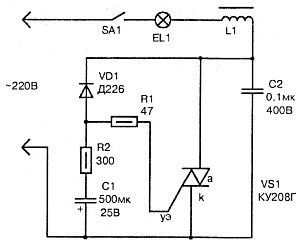 Element L1 throttle to suppress interference when opening the power switch, it can be excluded from the circuit. Resistor R1 limits the current to the control electrode VS1. The time of the master circuit is made on the resistor R2 and capacitance C1, which are fed through the diode VD1. The operation scheme is similar to the previous one, when the capacitor is charged to the opening voltage of the triac, it opens and a current begins to flow through it and the lamp.

The photo below provides a triac controller. It, in addition to regulating the power in the load, also produces a smooth current supply to the incandescent lamp during switching on. 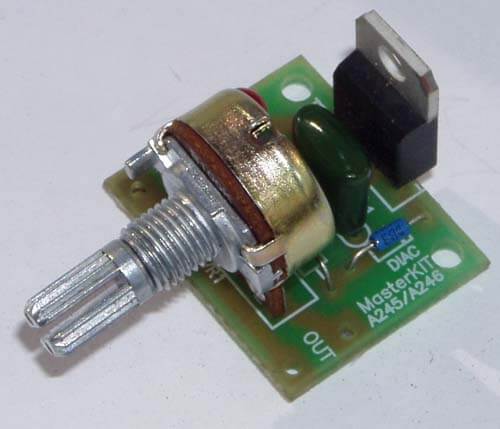 Scheme on a specialized chip

The kr1182pm1 chip is specially designed to build all kinds of phase regulators. 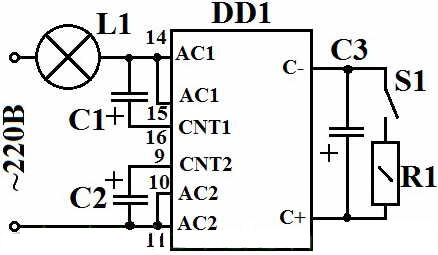 In this case, the voltage of the incandescent bulb with a power of up to 150 watts is regulated by the forces of the chip itself. If you need to control a more powerful load, a large number of illuminators at the same time, a power triac is added to the control circuit. See the following figure for how to do this:

The use of these soft-start devices is not limited to incandescent lamps; they are also recommended to be installed in conjunction with 220-volt halogen ones. The devices similar in principle to operation are installed in power tools that smoothly start the engine armature, also extending the service life of the device several times.

Important! With fluorescent and LED sources, installing this device is strictly not recommended. This is due to different circuitry, the principle of operation, and the presence of each device's own source of smooth heating for compact fluorescent lamps or the lack of need for this regulation for LEDs.

Finally, we recommend watching a video in which one more popular assembly diagram of the device is visually examined - on field-effect transistors:

Now you know how to make a device for smooth inclusion of 220 V incandescent lamps with your own hands. We hope that the diagrams and videos in the article were useful to you!